1. The food in restaurants is not only cheap but also really delicious

2. Vegetables and fruits are remarkably fresh and have a very natural taste

4. The Debar Maalo neighborhood with its cozy cafés

5. The huge bazaar (one of the oldest in the Balkans)

6. The pedestrian bridges over the Vardar river

7. The impressive, monumental cross on the top of the Vodno Mountain and the view from there

8. The understandable drive of the locals to find their national identity (even if it sometimes turns into over-the-top bragging)

10. Having the magnificent Matka Canyon nearby

Skopje - Willow trees planted in concrete cubes and a restaurant in an artificial boat - this tragicomical composition in half a meter of water - m.t. photo

1. The tragicomic frequency of statues of various national heroes (that irritates many locals too)

3. Walking on the streets knowing that Skopje is one of the most polluted European capitals

4. The outskirts are dull

5. Feeling sad about the earthquake that tragically destroyed the whole city in 1963

6. An interesting, but in no way romantic destination

7. The small Museum of Mother Theresa was not really interesting

8. It doesn’t make sense to visit Macedonia (officially Republic of Northern Macedonia) for Skopje only

9. Too many neoclassicist and neo-baroque imitations

10 The bazaar was terribly desolate when we were there 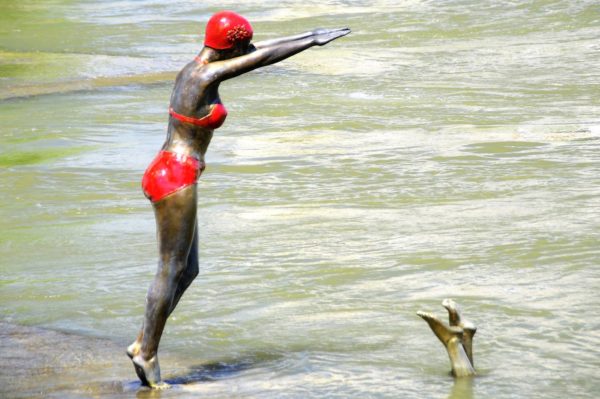 ,, Skopje is one of those places that has seen quite a lot of construction though there are still old bits. If I’m honest Skopje is not my favorite city. It just doesn’t really do anything for me. But you might like it. Probably depends on taste.

I came across an American who was upset that she wasn’t let into a nightclub wearing rollerblades and with her little dog. As I’m highly unlikely to aspire to such activity at least in this respect I’m safe.

The government tried to make Skopje more attractive and visually appealing though for many critics it’s just an expensive and frivolous display of nationalism – especially aimed towards Greece and the ethnic Albanians in Macedonia.

Lots of Macedonians have a big thing about Alexander the Great. There is a giant statue of him, or not depending on who you ask in the middle of Skopje. The Greeks are upset because they claim him and the Macedonians say it's just a random warrior on a horse, which it obviously isn’t, and it's all tied up with potential territory disputes. As I understand it Alexander was not exactly Greek although he leads them and the current population of Northern Macedonia has little connection with the ancient population he was king of. My reaction is to get a life there are enough problems to be going on with.

For me, the best bit of Skopje is the old bazaar, the biggest in the Balkans and I think about seven hundred years old. It's well worth a walk around but you’ll need a few sit-downs in tea shops. I must admit I’m a sucker for a market I suppose that I’m not that keen in Skopje in some ways the modern architecture tends to be over the top, grandiose and there is something of a nationalistic atmosphere about the place. (by Alan Durant, 2021)

The Vardar River isn’t particularly interesting – it’s usually a shallow trickle – but the huge number of bridges over it are fascinating. The bridges and new buildings in downtown Skopje have been constructed in recent years with EU money.

Among the sights of Skopje, perhaps the most interesting is the bazaar, which is one of the oldest and biggest on the Balkan Peninsula and has existed since at least the 12th century. It was badly damaged during World War Two, and then by the 1955 earthquake, so it’s not quite as it used to be, but you’ll still find within it mosques, minarets, caravanserais, and it’s a great place to stroll about, or maybe stop somewhere for a spot of dinner.

If you’d like to look at the sights of Skopje from above… Mount Vodno looms over Skopje, and on its summit is an enormous, 66m high cross. This cross, which is one of the largest in the world, was inaugurated in 2008, to mark Macedonian Independence Day, and to celebrate 2000 years of Christianity. You can reach the cross by cable car. To reach the cable car, take a bus from the central bus station.

If the air is clear, it’s worth the effort!

“On the basis of a few days’ experience, public transport in the Macedonian capital seems to be very chaotic, so tourists should come prepared. Preliminary orientation is not easy either: it’s difficult to get line maps and terminal departure times from their extremely crappy internet interface. There isn't much information at the stops either: many times there isn’t even a bus stop sign, just BUS written on the asphalt. There are signs at a few of the busier locations, which seem to be sun on a sort of budget taxi basis. The ticket system is completely electronic, with only plastic cards, and there is no paper ticket. The problem with this is that it’s not easy to get one as a tourist, especially on weekends.

You can only board at the front door, meaning you have to scan your pass, and though some drivers apparently do sell new cards on some lines, you can’t really rely on that. There are no ticket machines, so on weekends, you can only get a card from a small booth at the side of the central bus station. These are simple, one-way, non-time-based tickets, but there are also day tickets and season tickets. This is an interesting example of how important the sales and tariff structure behind such a system is: in the case of an ill-considered roll-out, the only result of this expensive electronic ticketing system is that visitors have to navigate an unnecessarily complex and expensive procedure.

Among the city’s bus fleet, Western Europe is only represented by some hundred-year-old, rusty, fourth-hand wrecks: otherwise, they’re all single-decker Russian LAZ buses and Chinese Yutong Citymaster double-deckers, which are very low-quality Routemaster copies. Most of the buses inside are amazingly busy and dirty; many of them have no openable windows and no air conditioning – it's no coincidence in summer many buses drive with the doors open.” (2018) 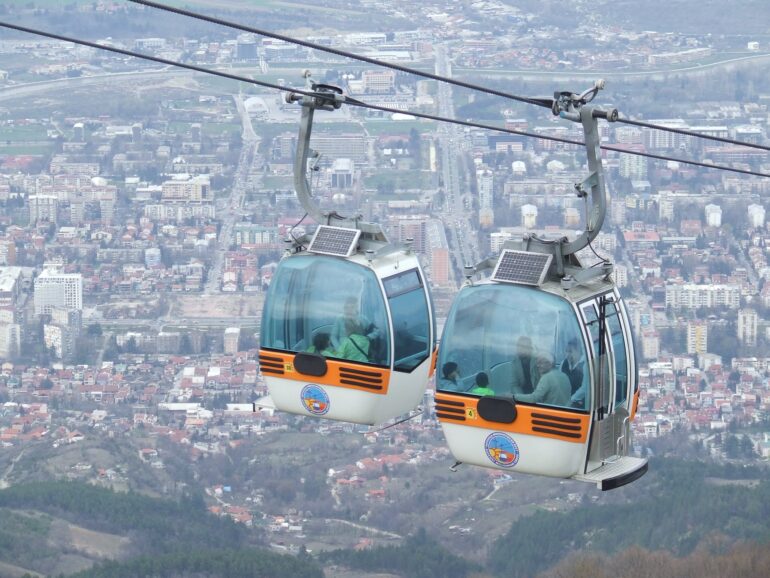 “Where can you eat good food in Skopje? You can find something good anywhere in the bazaar, but according to the locals, the food is more expensive there. There are many places to eat in the bazaar, our favorite was this restaurant.
Then a local acquaintance of ours took us to the Debar Maalo district of Skopje, where restaurants and bars line the street. We ate really well there, and went back several times! Locals go to this bohemian restaurant district to eat, so the restaurants and bars are always rammed.
We ate good food in these places: Kancelarja, Kaj Pero, Nazdak, but the food is probably good in other places as well. It’s best just to walk around, see if anywhere takes your fancy, then hope there’s a free table. 🙂
In the city center, almost all the restaurants we went to were on the banks of the river, the difference is that they are more for tourists, so they’re much more ‘manicured’ and a little more expensive. If you really want to eat locally, go to either the bazaar or Debar Maalo.” (2017)

“If you walk across the river from the main square dominated by the statue of Alexander the Great, you enter a completely different world. Much of Skopje was almost destroyed in an earthquake in the 1960s, and the only part of the city that remains intact is now home to the bazaar. Here are old houses and winding little cobbled streets. And the old glass portals house gold and leather shops, interspersed with some cozy cafés, restaurants, ice cream parlors, and bistros.
There is a significant Muslim minority in Macedonia, made up of Albanians and Turks, and they are mainly served by the bazaar area, where the mosques are practically next door to each other and there’s a real oriental atmosphere. It is said that this is the second-largest such bazaar area in Europe after the Grand Bazaar in Istanbul. In any case, anyone who loves Turkish souvenirs and oriental-style, chic gold jewelry will think they’re in heaven here. Sweet baked pastries and ice cream with Spanish churros should not be missed, washed down with Turkish tea.” (2018) 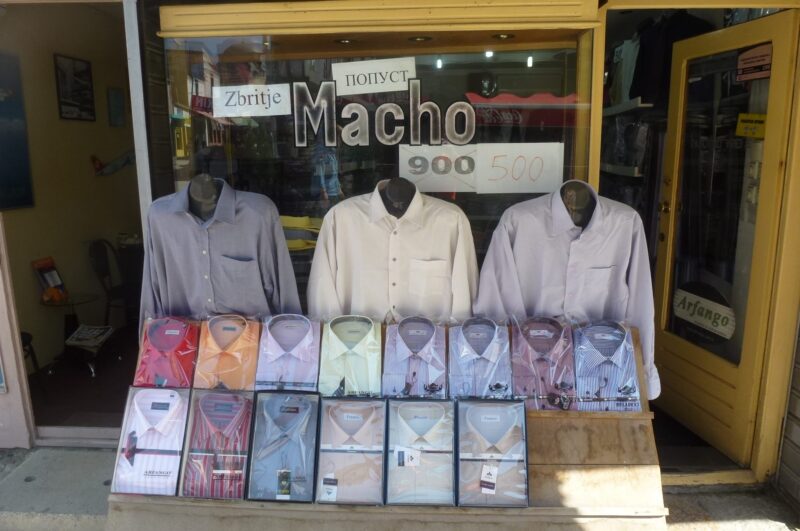 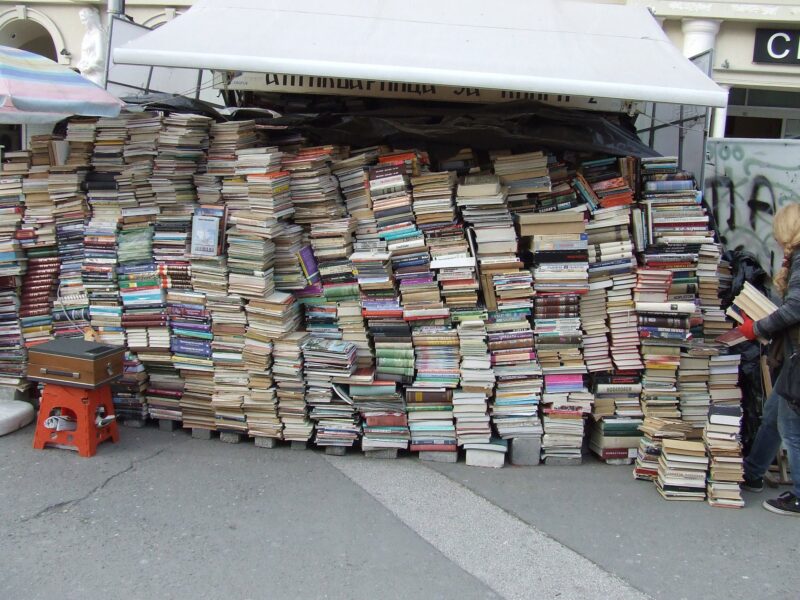 “My first impression is that I’m in London, among all the red double-decker buses, but within minutes I feel like some tasty food on a plate beset by flies, no matter how much I try to shoo them away, they keep coming back, offering a taxi service and demanding to know where they can take me. They come and hassle me, in a kind of Arabic/Turkish way, though not in an intimidating style, and fortunately, nothing of that sort happened in the Old Bazaar, even though I would have expected it more there. So, there was the first, minor culture shock, after which the only question was whether or not the girls here wear hot pants and miniskirts. In the mall, I discovered that they do indeed. For the rest, I only mention that visitors should pack appropriate clothes for the trip. I recommend that ladies were long pants since they’ll feel more comfortable that way over there.” (2019)
________________________________________

“If you can say this, and if there really is such a thing as ‘typically Balkan’, then Skopje certainly has many Balkan features. There are a lot of stray cats and dogs in the city, with the latter preferring to roam around the city with their pack and sunbathe in the main square, but they don’t bother anyone.

In addition to the stray animals, there are quite a few begging children around Macedonia Square and the stone bridge, and it’s important to watch out for light hands straying into your pockets,” (2019)

(in Macedonian it is written in Cyrillic Скопје)

In 1964 a massive earthquake struck Skopje killing more than a thousand people. Much of the city was in ruin. 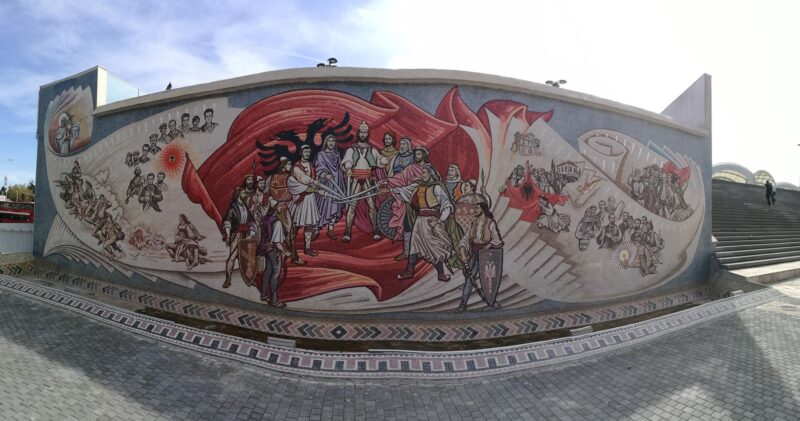 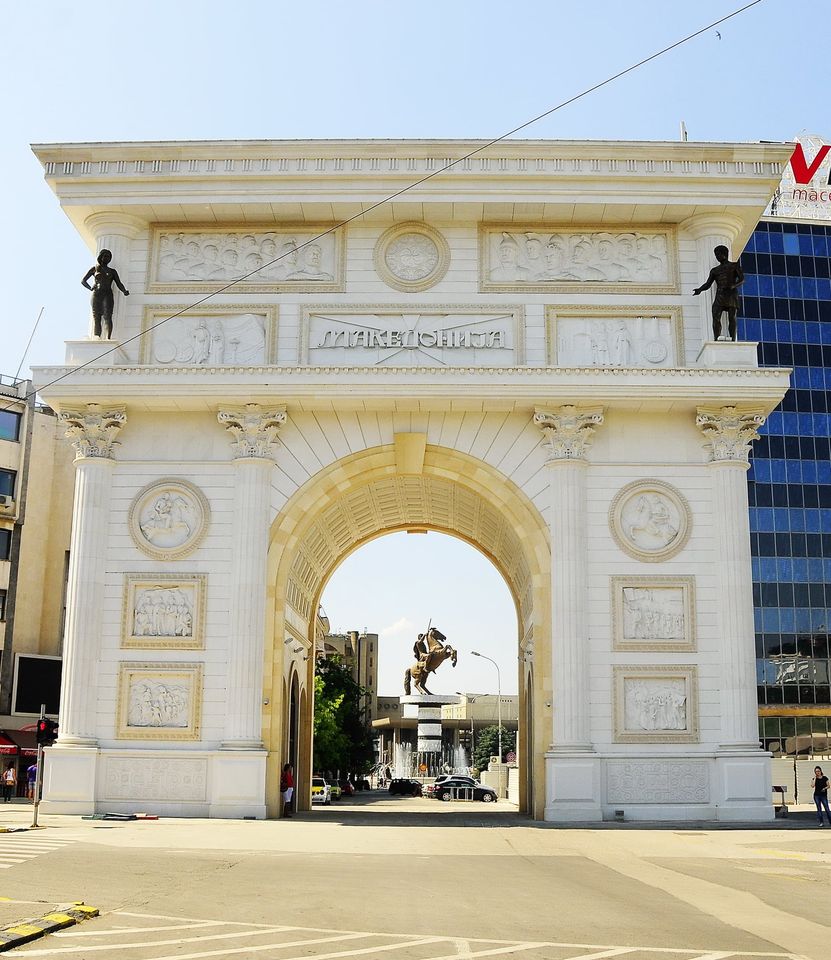 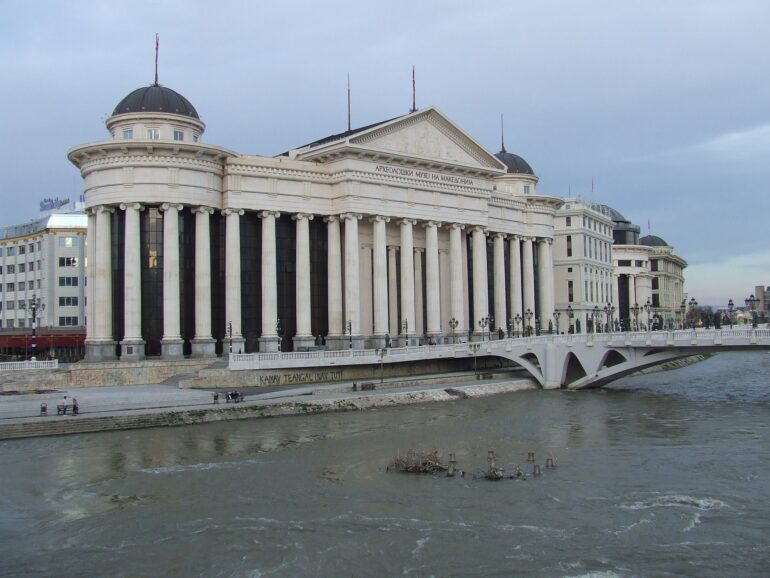