1.    The mountains and national park excursions (e.g. Deosai National Park)
2.    Challenges make it an exciting destination
3.    The mosques of Islamabad and Lahore
4.    The Hunza and Kaghan valleys are among the most
beautiful in the worlds
5.    The Sandspit beach (south-east of Karachi) with picnicking locals
6.    No large, noisy tourist groups. Pakistan is not yet a popular
destination, so you feel like some sort of privileged adventure-traveler
7.    Very cheap
8.    Most of the locals are very hospitable and have an understanding
of what a visitor may need in the local circumstances
9.    Pakistan is not as much a cultural tourism destination: nature and
the local life will probably be the main interest
10.    We could always choose a trustworthy local to assuage our security
concerns

1.    Our permanent security concerns, even when unjustified
2.    Strange that alcohol consumption is forbidden while drugs are very prevalent
3.    Frequent overcharging of tourists without offering corresponding quality
4.    Dirty parts of the Benazir Bhutto international airport in Islamabad
5.    We found Iran a far easier tourist destination than Pakistan
6.    Lack of proper tourist infrastructure: public transport is a
challenge for foreign visitors, transfers are very slow, timetables are
confusing
7.    Bus drivers mostly try to overcharge foreigners
8.    Very clear that they have a macho society where women are
second-class
9.    Not a country for a single foreign tourist to hook up with local girls
(very dangerous to even try it)
10.    We felt a degree of distrust from the locals – and were unsure whether at times this even amounted to a deep dislike

“Pakistan has a distinctly bad reputation in the international media, and boundless curiosity had to overcome our apprehensions. I had similar reservations about Iran before travelling there. So I can say from experience that Iran is, from a tourism perspective, a much less demanding country than Pakistan. What both have in common, however, is the natural and good-natured character of the local people, who do everything they can to show visitors the best possible face of their country.

Pakistan is rich in historic monuments, and there are plenty of sights. What’s more, there are no hordes of Japanese and Korean tour groups as elsewhere: we hardly saw another tourist.
The biggest problem was definitely transport, because they are not sufficiently prepared to meet the needs of European travelers. Transport is slow, and the timetable for long-distance buses could hardly be more convoluted. Of course, being foreign tourists, the bus drivers overcharged us wherever possible.

Still, for us, Pakistan was a very inexpensive country, and somehow we didn’t do too badly with the currency exchange. We were able to eat very well and cheaply. I only had stomach problems once, and that didn’t last more than a day. What bothered us more was the terrible pollution in the cities, and the constant, deafening noise. In most places, there are piles of trash in the street.

The vast majority of Pakistanis were extremely friendly towards us. It seemed to us that they found it easier to adapt to our worldview than we could to their rigid world of customs. In Pakistani society, the rules and expectations for women are light years away from our way of thinking.

We were constantly struggling – strictly within ourselves and with one another – with what to think about these things. Just to be clear, this is NOT a destination for parties and holiday flings.
Compared to the monuments, the most important sights were the natural wonders, and especially those majestic mountain ranges.

Our feelings of personal safety varied a lot. We felt safe in the countryside, in villages and small towns, but not in big cities. Staying in the suburbs of Karachi, we were normally in gated compounds. Pakistan is a very poor country, and we felt that the actions of the urban poor could be unpredictable. Tens of thousands of illiterate people seemed a possible source of danger. Where possible, we tried to arrange some sort of protection for ourselves. Not the people who offered themselves to us as guides or security, but those whom we ourselves chose. That way we felt somewhat safer.

It wasn’t just robbery we were worried about – we also sensed, in spite of the many friendly people, a certain amount of mistrust towards white Europeans. It was impossible to say where and to what degree this mistrust might have curdled into hatred, which might put us in some degree of danger. What if someone falsely accused us of something? Would that spark widespread anger towards us? I worried about things like that. Again, though, I had to say that in 90% of cases, people were extremely friendly towards us.

They speak good English, but the strong accent makes it damned hard for a non-native speaker to follow.

What we liked best among the cultural attractions: Lahore Fort, the bazaars, and chaotic alleyways of Rawalpindi (for some reason we didn’t feel at all anxious there). Looking at Islamabad from a terraced park above the city, the Rawal Lake in Islamabad, the pink and white marble houses of Lahore, the huge mosques. We learned at our cost that it’s best to avoid the famous sights on Sundays because they’re visited by enormous crowds of locals. (D&K, 2016) 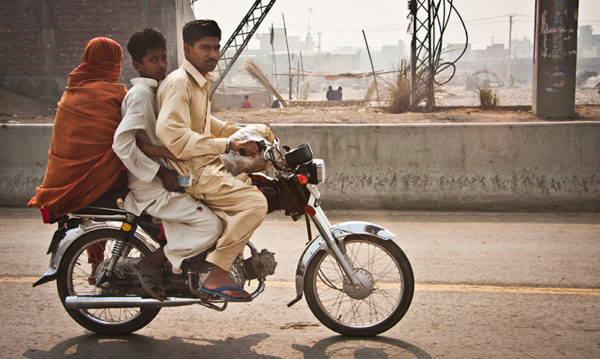 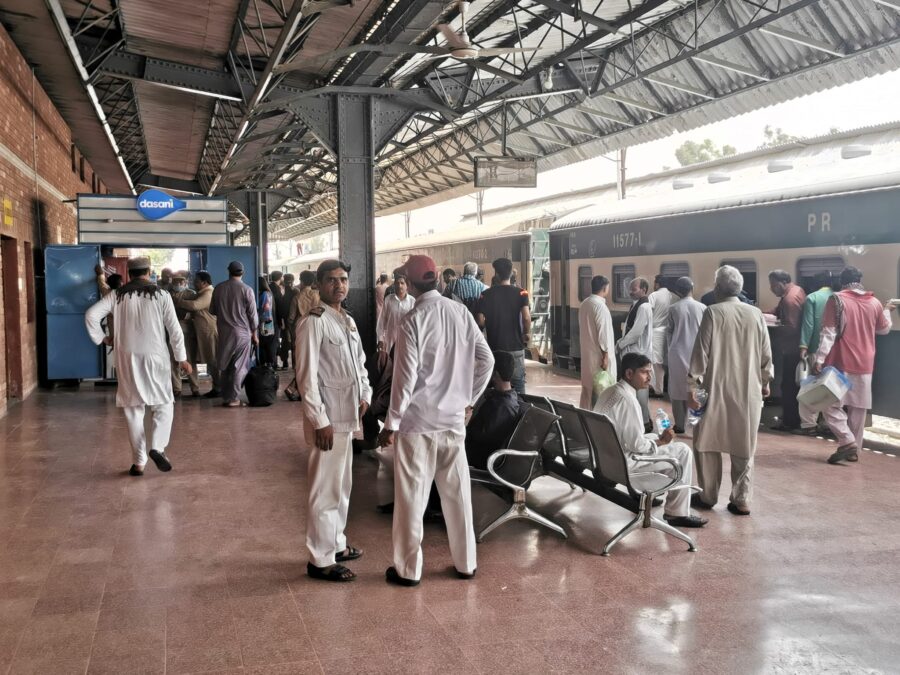 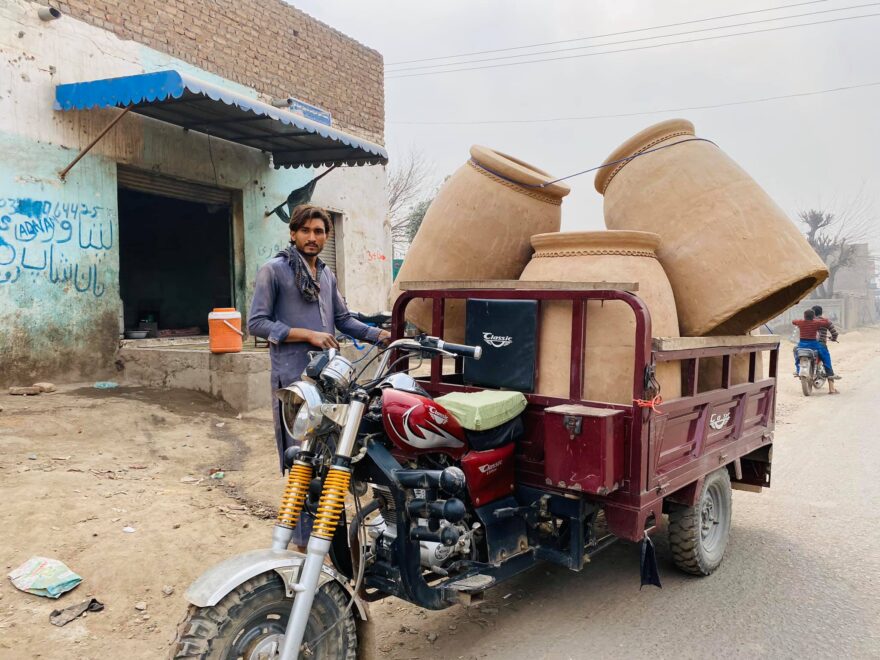 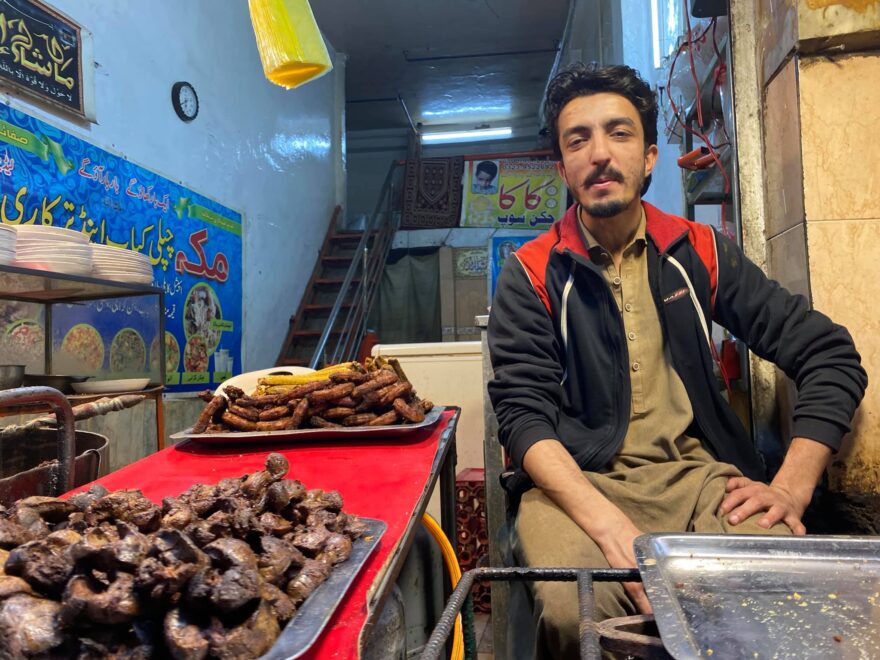 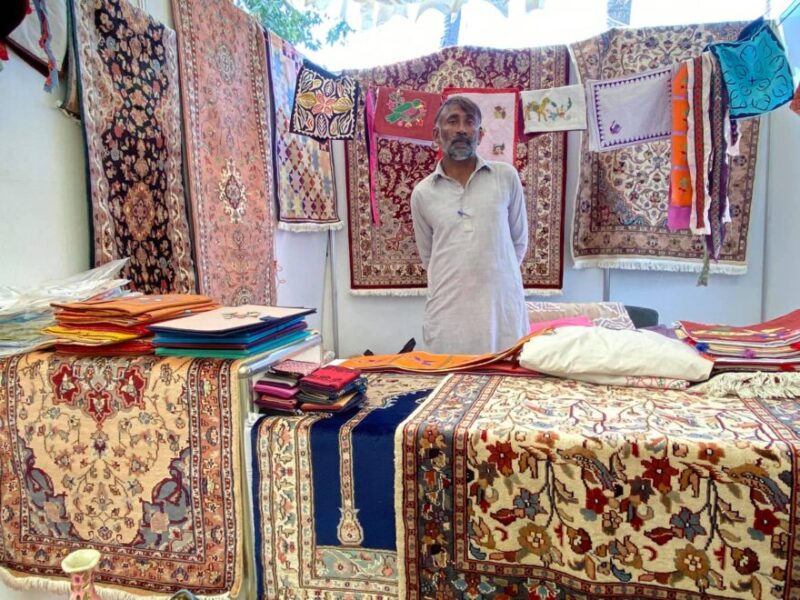 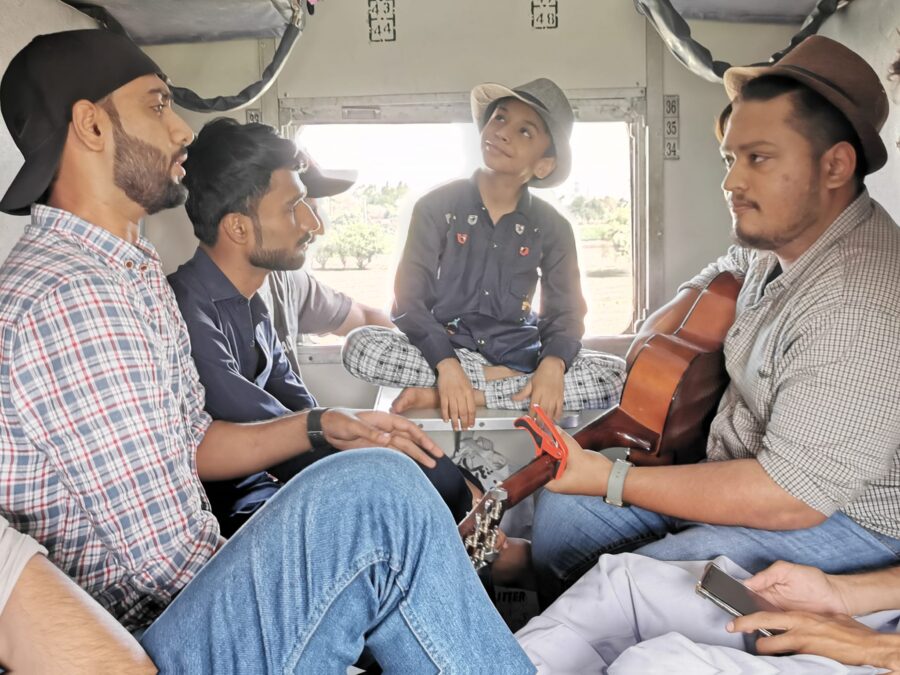 "The illiteracy rate is high. About 80% of women are illiterate. There are military coups here, in which case the previous president and the general staff are at best imprisoned, and at worst killed. But there is no need to worry, radical terrorist organizations are most active in the south. Though we were also advised to avoid the older part of town, it was here that we wandered around and took photos with the machine gun cops and scowling boys in turbans. Since it happened, it doesn't matter.
The police chief was kind to us and invited us over for a few soft drinks because he suspected we were anti-state agents. When he realized he was just stupid, he let us go with a smile.” (2019) 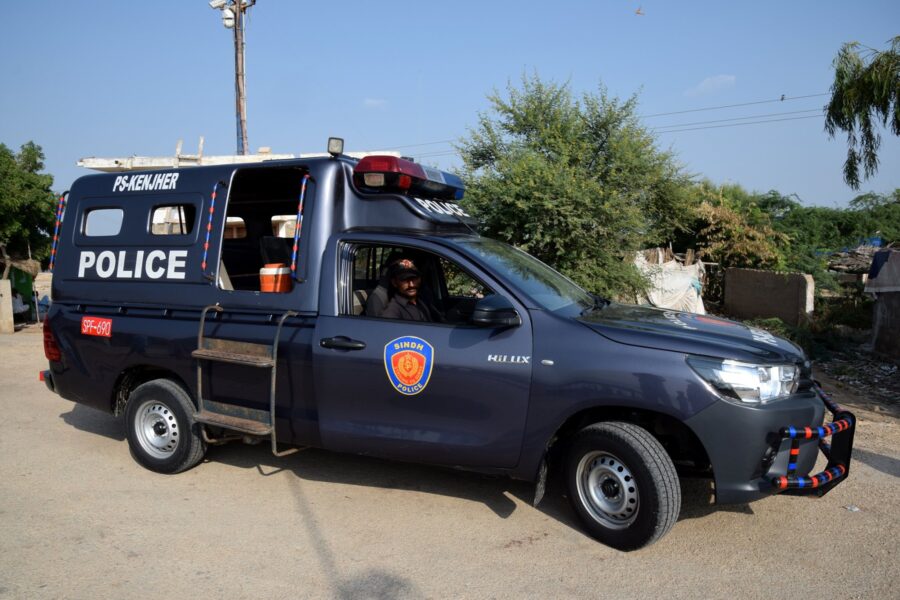 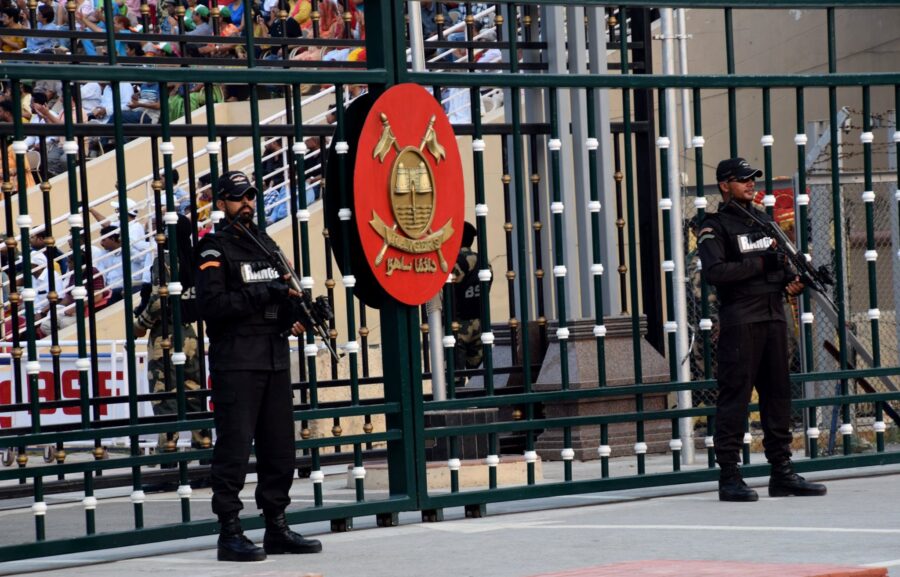 “We picked up an amoebic infection in Pakistan, as our later diagnosis revealed. I don’t think anyone is surprised that this entails digestive issues. Fortunately, nothing else, so relatively tolerable. I got rid of it by my incredible immune system, G suffered with it through about half of China before finding out from the internet what the medicine for it was. This had been tucked into one of our backpacks the whole time, so that made things easier.”

“One thing we can all congratulate ourselves on at home is drinkable tap water. That’s a massive deal. Well, they don't have drinkable tap water here, and it's not even recommended to drink from the inflatable container of water locals keep in their house. Everyone’s a genius with hindsight. There, on the other hand, the stomach upset got me and the guest from Canada just in time for the wedding day. Unfortunately, since I didn't take a  little home from home with me, I had to make do with the good old-fashioned outdoor method, and from then on I was only allowed to consume bottled mineral water, bananas, and rice. I wasn’t so bothered by that, since the local food is so crazily spicy and oily.” (2019)

“A coil-shaped medicine for stomach problems is pushed into my hand, which I immediately mix with a little mango. The material almost swallows the mango. I also remember my late chemistry teacher – the glass almost explodes, killing the organic matter in a hiss. Ahhh I remember what I need, this will be the stuff! ISPAGHOL is its name. (2019) 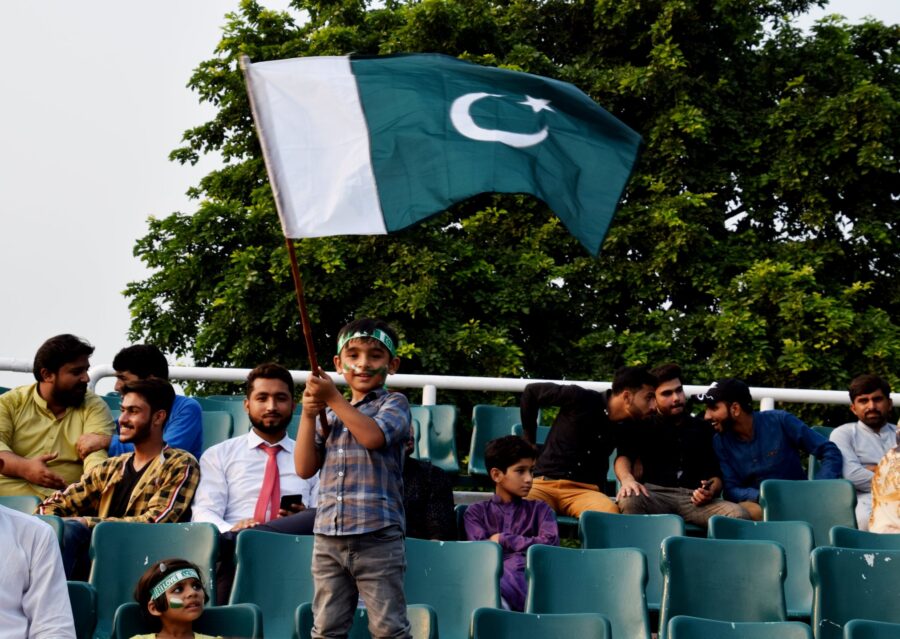 Capital city: Islamabad - Built as a planned city in the 1960s to replace Karachi as Pakistan's capital, it is located on a plateau in the northeastern part of the country.

No, Pakistan is not an Arab country.

Language: Urdu is the national language, but English is also an official language –People typically talk to each other in Urdu, but use English in written communication. – Urdu has no Latin alphabet, but a distinctive one, right-to left, somewhat similar to the Persian alphabet. – More people speak the Punjabi language than Urdu - educated Punjabis can read and write in Urdu (and in English).

Religion: 97% Muslim - Most Pakistanis are Sunni Muslims, but there are also significant numbers of Shīʿite Muslims.

Political system: Pakistan is an Islamic republic (Islam is the state religion) and a multiparty democracy. Executive powers are in the hands of the Prime Minister, not the Head of State. The penal code includes elements of Sharia (Islamic law).

Pakistan is a left-driving country.

Safety:
Pakistan has many valuable tourist attractions, but few visitors. Terrorist attacks, demonstrations, xenophobic sentiments that are often stirred up for political gain and increasing crime rates all add up to make the country an unpopular tourist destination. Several areas are particularly dangerous (like Azad Jammu and Kashmir).
Certain vaccinations are required. 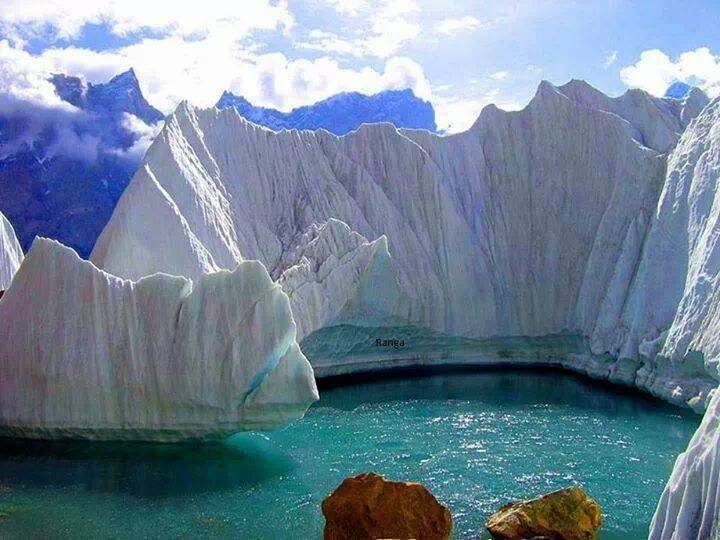 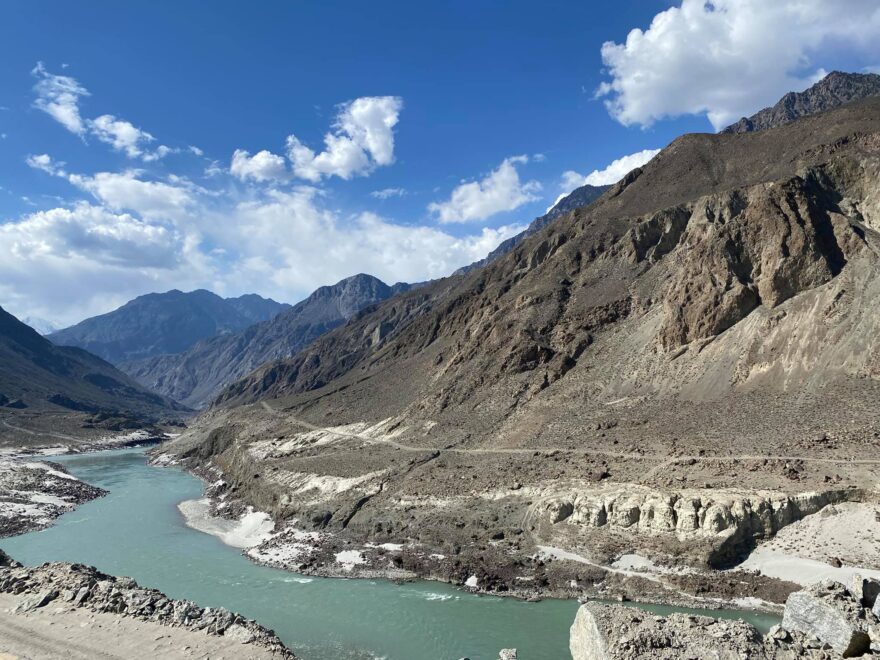 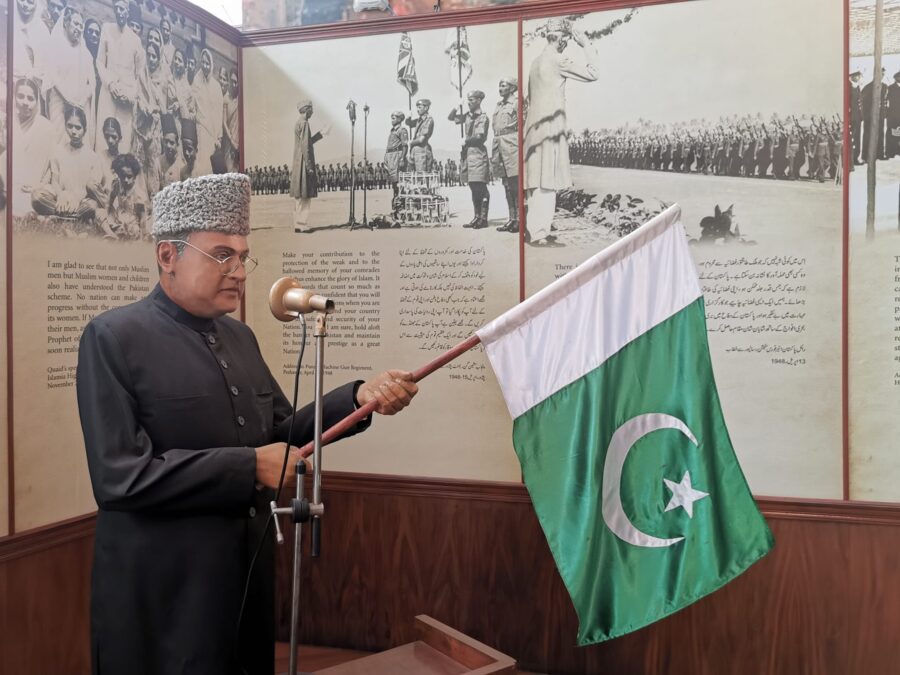 In urban centers, most women do not cover their heads. 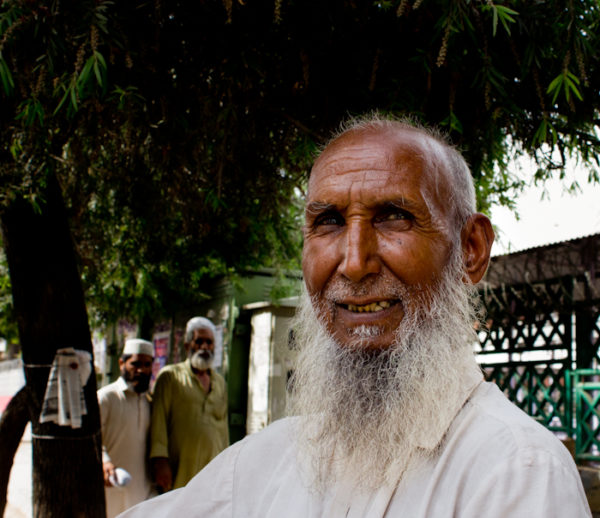 Pakistan - he's past his prime 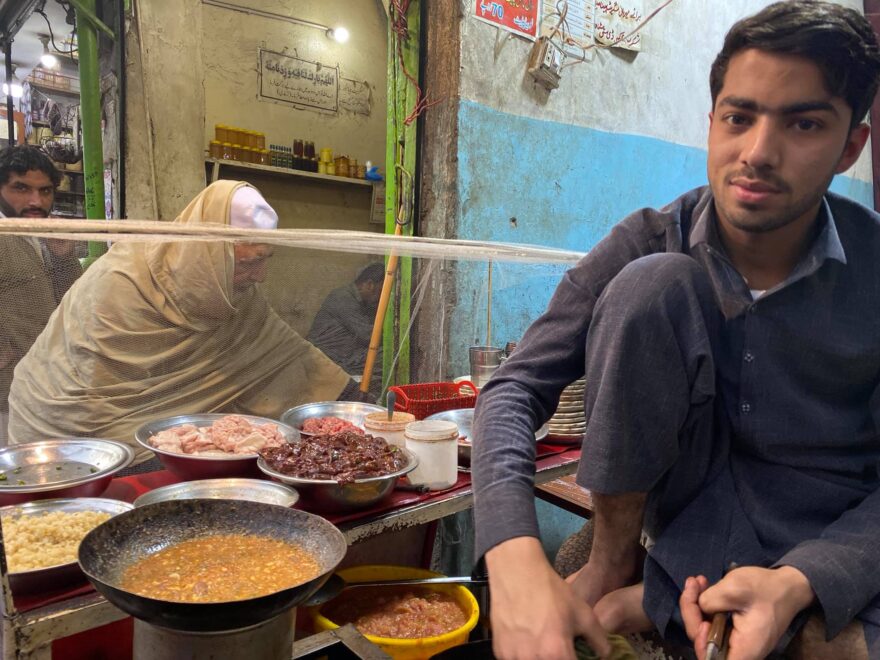 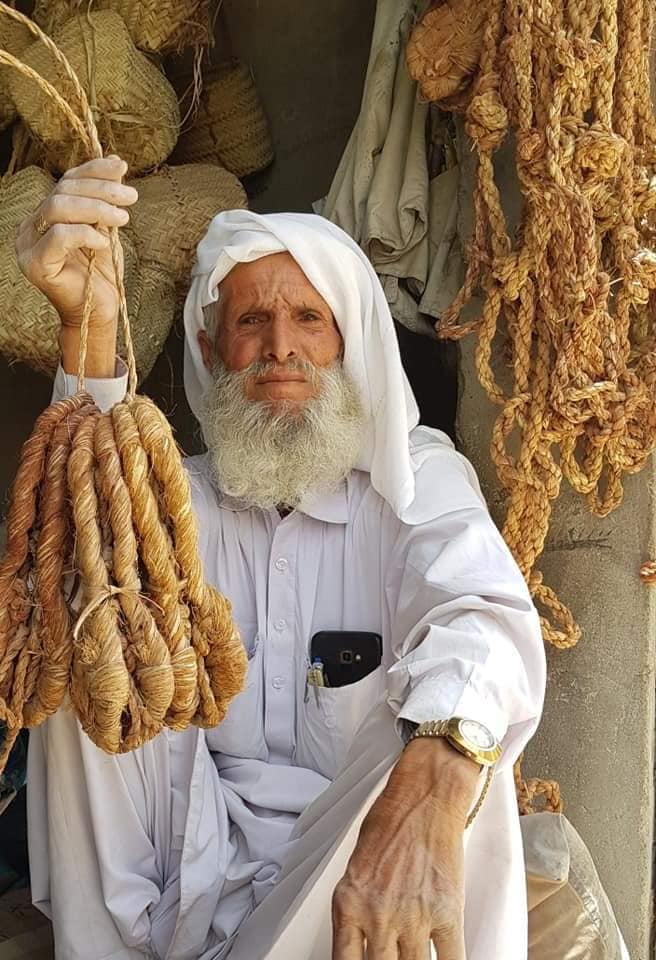 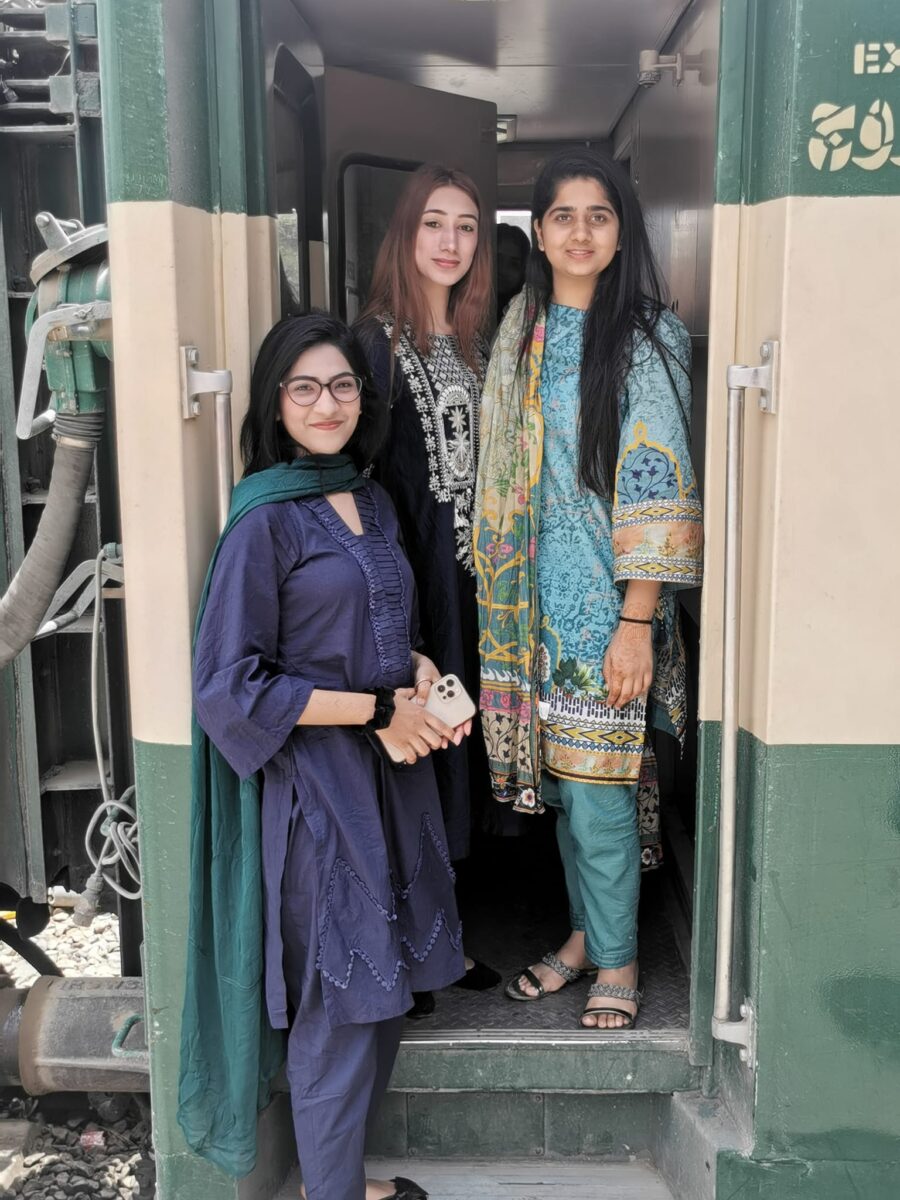 Pakistan - Islamabad - Friends have fun after praying in the mosque - s.n. photo

• Under the Blasphemy Act, a person who insults the Prophet or violates the Qur’an can be sentenced even to death.
• A tourist in Pakistan must be very, very careful to respect local customs, as well as the rules of communication and social organization, in all respects. The vast majority of Pakistan’s population lives faithfully according to the Qur’an. Do not express any doubts or reservations you may have on this score, in any form whatsoever.

Women are not required by law to wear a veil, but many women do voluntarily cover themselves as much as possible based on family and/or social expectations.
• Nothing offensive should be said about the current president. In Pakistan, anyone who violates the honor of the president can face up to 14 years in prison.
• Refrain from all kinds of jokes or wisecracks about their religion, political system, or customary law. When asked what kind of religion you follow, by no means say that you do not believe in God and have no religion. That’s a huge sin there. 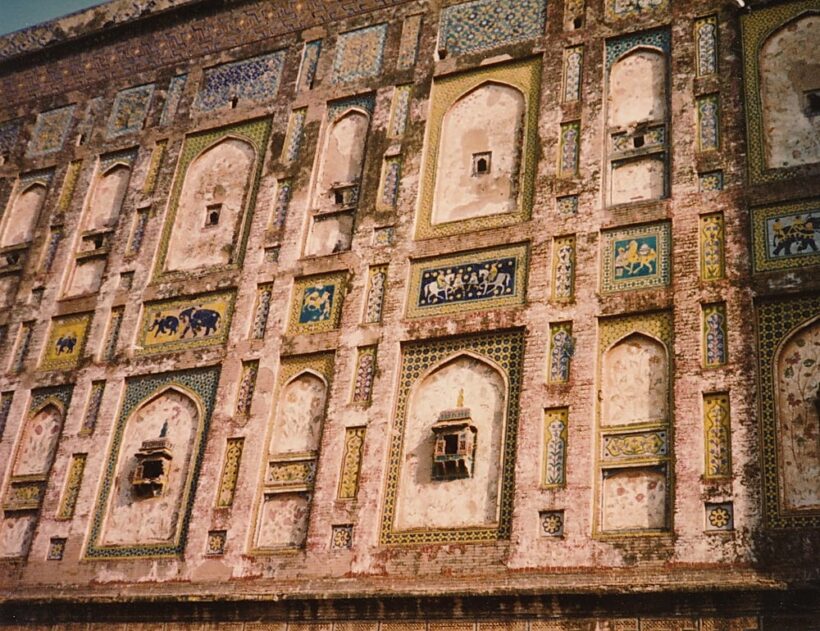 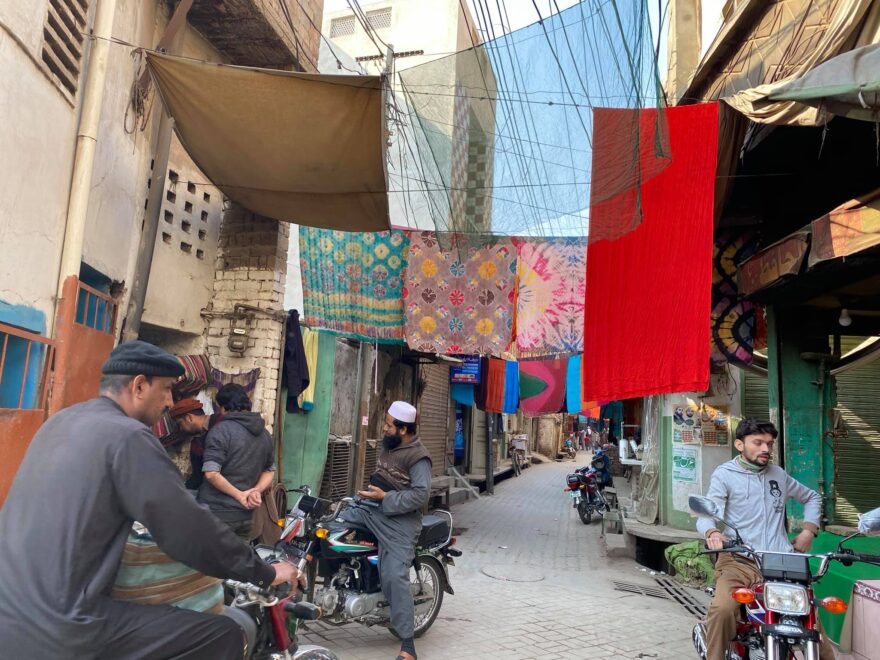