1.    To discover that unique feeling of freedom on a desert tour

2.    Traveling without seeing other travelers

3.    The locals were friendly to us, in their own shy way

4.    Seeing the fishermen coming back from the sea with their catch late in the afternoon while their families were eagerly waiting for them on the shore

5.    Swimming in the ocean at a beach not too far outside the capital – the locals did not swim though because they were busy staring at us

6.    Funny to see all the worn-out Mercedes cars (stolen in Europe?) in the streets of Nouakchott

7.    The White Headland at Nouadhibou

8.    The birds in the Banc d’Arguin Nantional Park (a UNESCO heritage site)

9.    We enjoyed being crazy enough to choose this destination

1.    To hear that Mauritania was among the last countries in the world to abolish slavery (in 1981!)

2.    It was quite terrifying to see the capital so closely surrounded by the endless sand desert

3.    Feeling sorry for the locals because nature provides them with so little rain water

4.    We dislike the local practice of female circumcision because its real objective is not health-related but aims to deprive women of experiencing orgasms (horrific tradition)

5.    We were told that the nomadic way of life is dying out

6.    I could not find any nice-looking souvenir at the big market in Nouakchott

7.    The threatening sight of car wrecks and all kinds of skeletons along the countryside roads

8.    Our struggle with the mosquitoes in the Diawling National Park

9.    When a giant mantis flew in through the open window of our car and the local driver was far more panicked by it than we were

10. In Diawling National Park, our car got stuck in the black mud 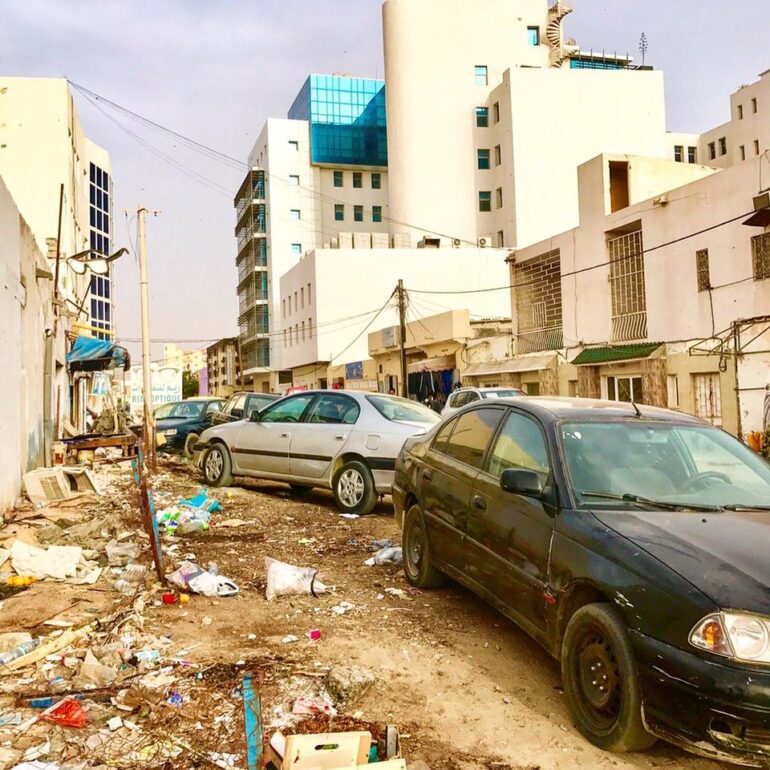 Mauritania - family house and car tire workshop in the middle of the red-stone desert - b.k. photo

“We spent five nights in Mauretania, three of them alone in the depths of two separate national parks. Unfortunately, we searched in vain for travelling companions, and so for safety reasons we were forced to abandon our plans to explore the eastern part of the country, which is richer in local traditions, by driving 200km across sand and alongside a railroad track. We spent a day each in the country’s two largest cities, but it would be unfair to reinforce from such brief experience what we’d already heard from everyone else: namely that there’s nothing to see in either of them. If nothing else, the unbelievable crowds and bustle of Nouakchotti market, and the white headland a few kilometers from the city of Nouadhibou are at least worth a visit.

The Banc d’Arguin National Park is a nesting and overwintering ground for migratory birds, a natural world heritage site, and also home to a grand total of around 500 people. This meant we could do a spot of wild camping here for two nights, the second night close to a herd of camels, without anyone noticing. Here we saw flamingos, pelicans – and mice.

The landscape is also extremely varied: sand dunes, scrub-covered savannah, swamps, salt marshes and totally barren wildernesses alternated. It was also a great country to drive though: you can just go off-road, wherever you please, and steer using the gas pedal, since the sand acts like rails for the steering wheel in any case. The wildest moment was when a ten-inch locust hopped in through the open window and nearly scared the driver to death.

The Diawling National Park is the area of Mauretania which receives the highest level of rainfall. (Not hard – the Sahara covers 80% of the country). This marshland is a breeding ground for mosquitos, and thus for malaria too. People have, in consequence, tended to avoid it, which means it is rich in animal life. It’s also a very fortunate thing to the warthogs that for religious reasons it is forbidden to eat their meat. We arrived just before sunset, and we had just unpacked and eaten dinner when the mosquitos descended: we decided to retreat to our tent. The spectacle which greeted us in the morning, however, more than compensated for any discomfort: I’ve never seen such a profusion and diversity of animal life outside of a museum.

In just one short hour we saw dozens of warthogs, eagles, baby crocodiles, monitor lizards, enormous flocks of birds, and a Mercedes with its broken axle stuck in a washboard.
Even after the chaos of Morocco, driving here came as a shock. The red light may not simply be a decoration, but it’s certainly no more than a suggestion. Even on the country’s principal roads, meter-wide potholes aren’t uncommon, and sometimes there isn’t enough asphalt to drive around them. Still, there’s so little traffic that driving is possible: we saw more burned out cars by the roadside than actual cars on the road.

Mauretania is a poor country, with exceptionally low levels of rainfall. It is moderately dangerous, with a serious litter problem, and there aren’t many sights to see. For all these reasons, it’s unlikely to make the Lonely Planet top ten list. Many times we had the feeling that we were the only tourists in the whole country. (In Nouadhibou, for example, we looked in the three best-known hotels, to see if we could find any other foreigners, but without success). This very fact, however, makes it an interesting travel destination. (2016)

Self-driver travelers with a rented vehicle may face risks as the local drivers do many irresponsible maneuvers. Many cars are unlit, sandblasting worsen visibility, camels, goats, and donkeys make surprising crossings. 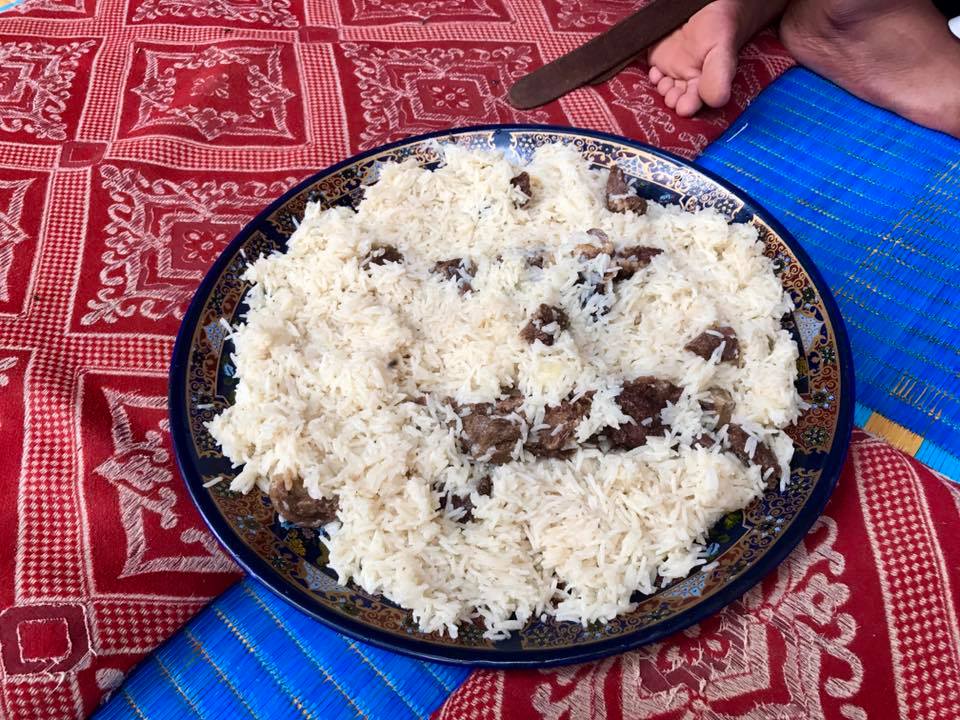 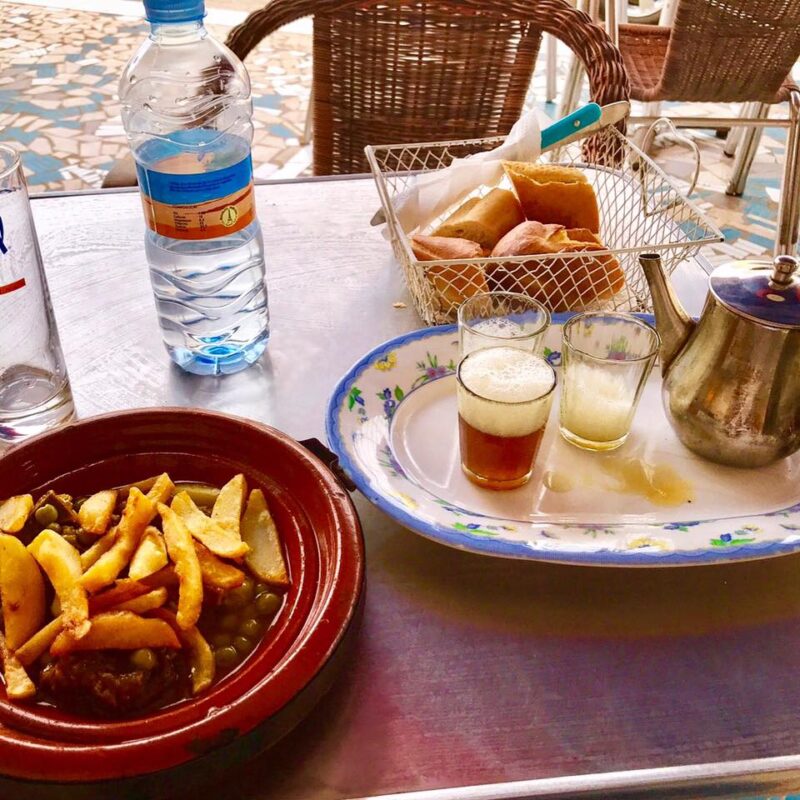 In Mauritania, bank cards are not yet accepted, so bring a sufficient amount of cash with you. In Nouakchott, some ATMs accept VISA type credit cards. 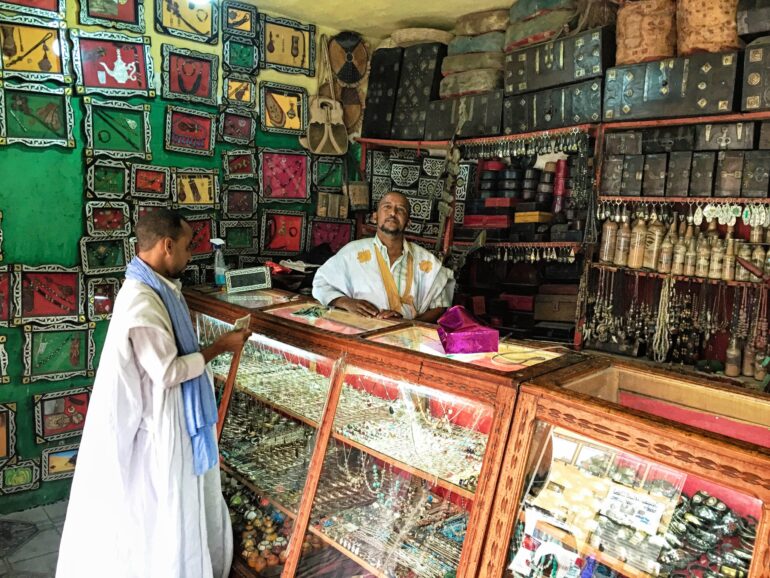 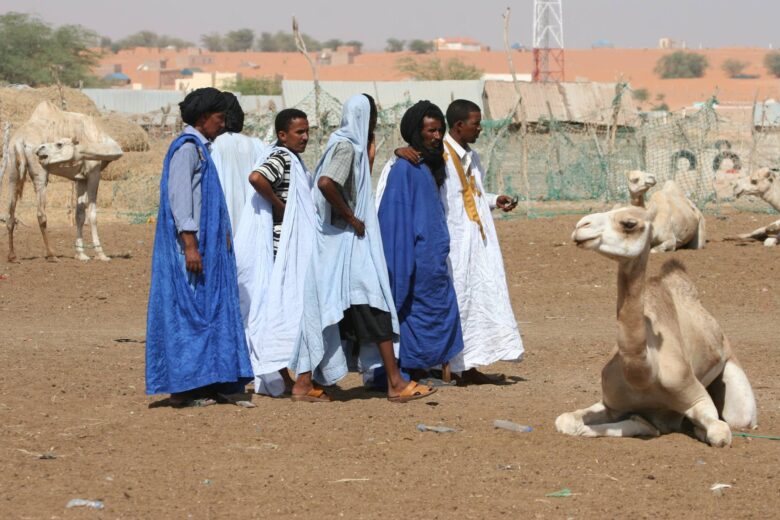 Tourists are at significant risk of Islamic terrorist attacks due to the crisis in northern Mali, the ongoing French military intervention in North Africa, and sub-Saharan Africa. Travelers can be victims of kidnappings and assassinations, so visiting Mauritania is somewhat dangerous, especially for individual travelers.

Despite the presence of significant military, police, and checkpoints, even the 500 km-long road connecting Morocco to the capital (Nouakchott) is dangerous for travelers because the terrorists are professional to target Westerners. Some tribal leaders even help the terrorists, who often disguise themselves as local military or police.

Only driving in convoy can be safe, and avoid overnight travel at all costs. There were also kidnappings in the capital. Every place visited by foreigners poses an increased threat of terrorism!  (2020)

1. The sale of alcohol, drug trafficking and prostitution are prohibited!

2. Homosexuality is not tolerated. 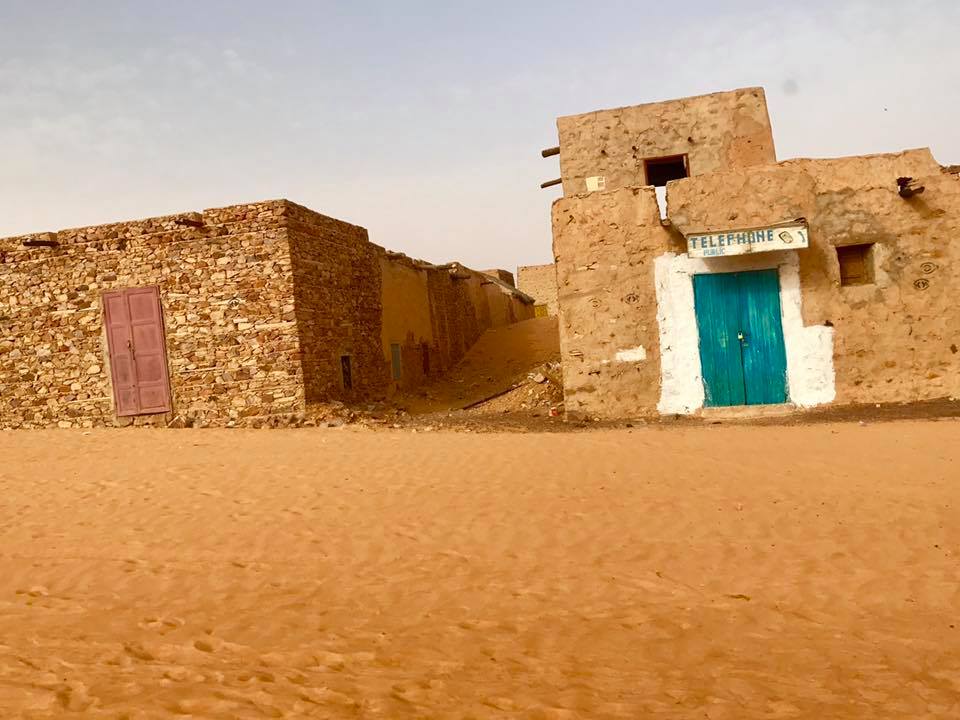 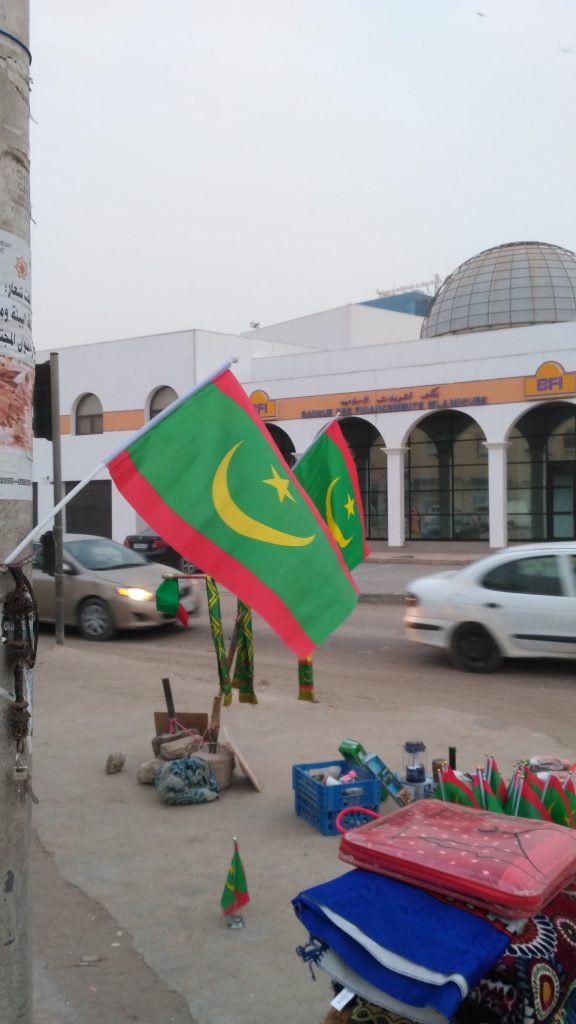 Mauritania is an Arab country located in the western part of North Africa and the Sahara (some sources list it as part of West Africa). Mauritania is one of the so-called Maghreb countries.

Mauritania was a French colony until it gained independence in 1960.

Capital city: Nouakchott – it means “place of the winds.”

Mauritania is one of the most sparsely populated countries in Africa.

Mauritanian women cover their hair but seldom their faces in public. Although many women are active in business, and some even in government, both men and women usually refrain from shaking hands with a member of the opposite sex.

Languages: Arabic is the only official language, French is only a working language for much of the central government and for business transactions - The government strongly encourages the use of Arabic over French in official and legal documents – Arabic is in fact taking French over in many areas – less and less people speak fluent French throughout the country, most strikingly in provincial government offices or police stations where French used to be the usual working language.

Religions: Sunni Islam is the state religion – Only Muslims can be citizens of the country – According to Mauritanian (Islamic) law, rejecting or denying the Islamic faith (apostasy) or insulting God or the Prophet Muhammad (blasphemy) is punishable by death. Mauritania is one of only 13 countries of the world where atheists can be sentenced to death. Most of the country’s citizens are devout Muslims and wholly support the application of Sharia (Islamic law).

There are historic tensions between the country’s Moors, with their strong Arab identity, and its sub-Saharan people, who are opposing Mauritania’s “Arabization”. There is a caste system that privileges certain Moor groups and marginalizes darker-skinned Mauritanians.

Mauritania was one of the last countries in the world to abolish slavery - 1981! However, it is estimated that there are still about 90,000 people in the country living in “modern slavery” (forced labor and forced marriage).

Mauritania is not a safe tourist destination. Terrorist and militant groups, as well as other criminals often target foreigners for attacks, kidnappings, muggings, and theft. Nouakchott is relatively safe, but it is best to avoid the beach area around the city at night.

People generally drive on the right side of the road, but sometimes on the left, if it suits them better that way.

The tourist infrastructure is very underdeveloped.

Most tourists who visit Mauritania do it for hobby sport fishing in the Atlantic Ocean with a basis in Mauritania, or for bird watching.

The climate is hot and dry in the north, with some rain in the south between July and October, but the average annual rainfall is deficient. During the rest of the year, northeast winds blow, the weather is desertic. In Nouakchott, the average temperature in January is 22 ° C and 28 ° C in July.

Mauritania was part of French West Africa, created by French colonists and disintegrated in 1958.

Mauritania is one of the poorest countries in the world.
Despite a ban, tens of thousands are still languishing in slavery.
Mauritania is a member of the Arab League.
It is a deadly sin to be an atheist in Mauritania.

Their main export is iron ore, but that may reap significant economic benefits from offshore oil fields close to the coast. 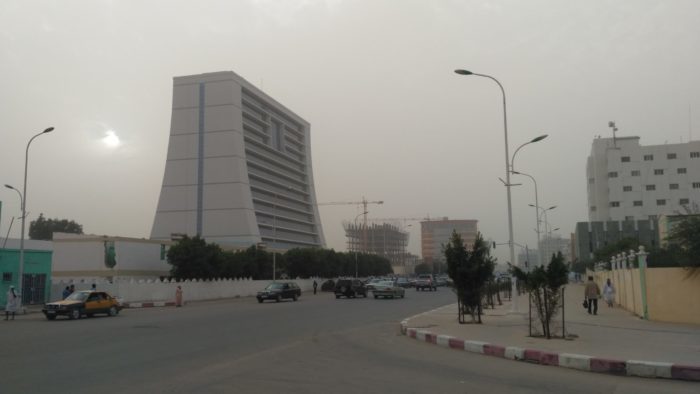 Mauritania - the modern side of Nouakchott 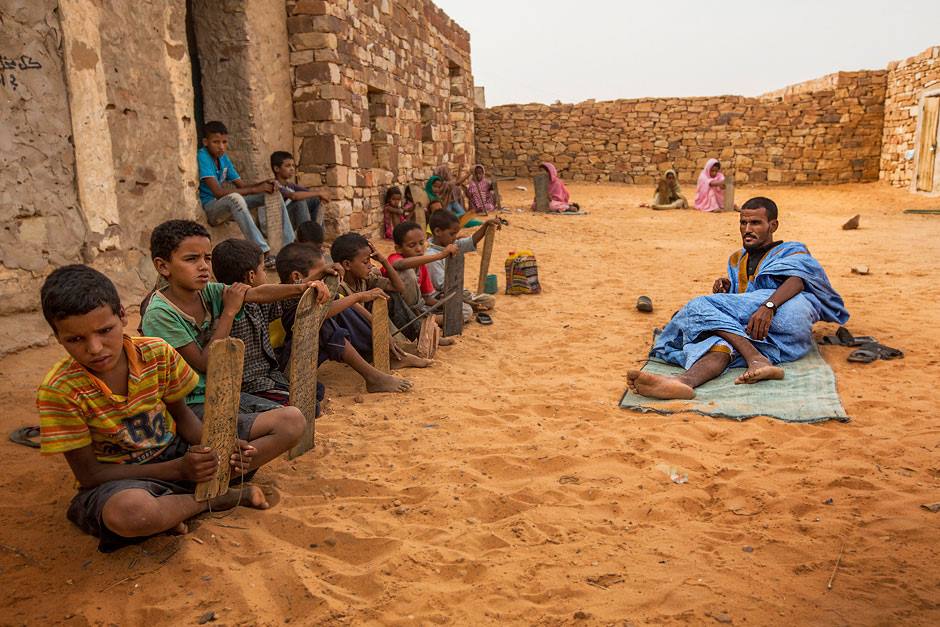 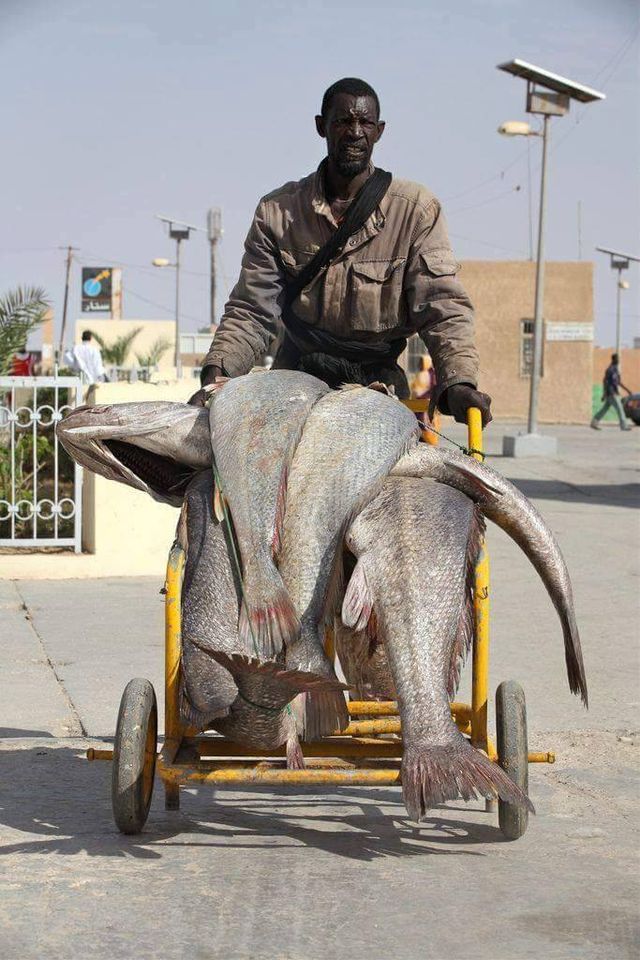 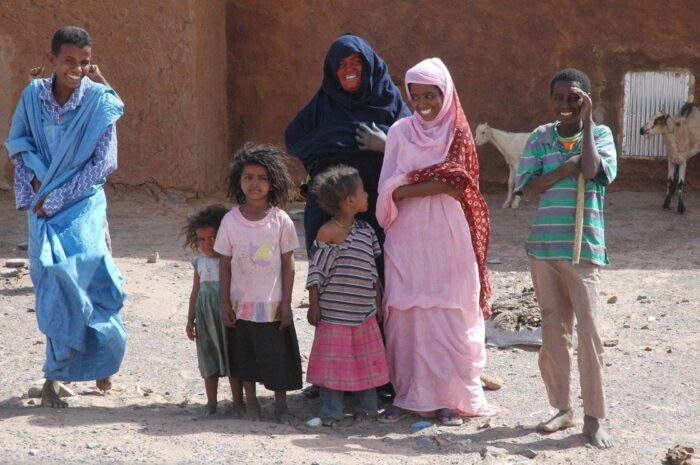 Mauritania - they were happy to stand in front of the camera - b.k. photo 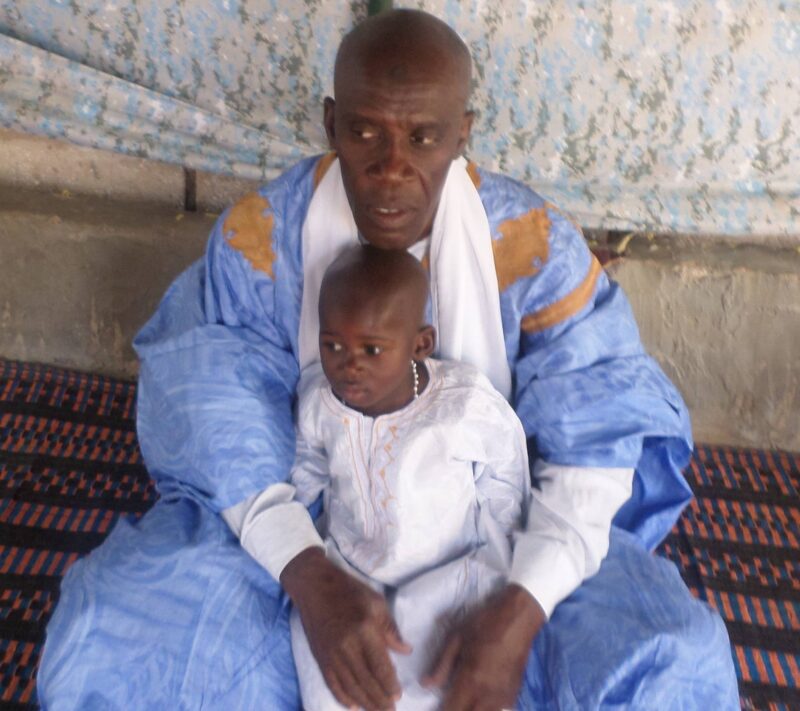 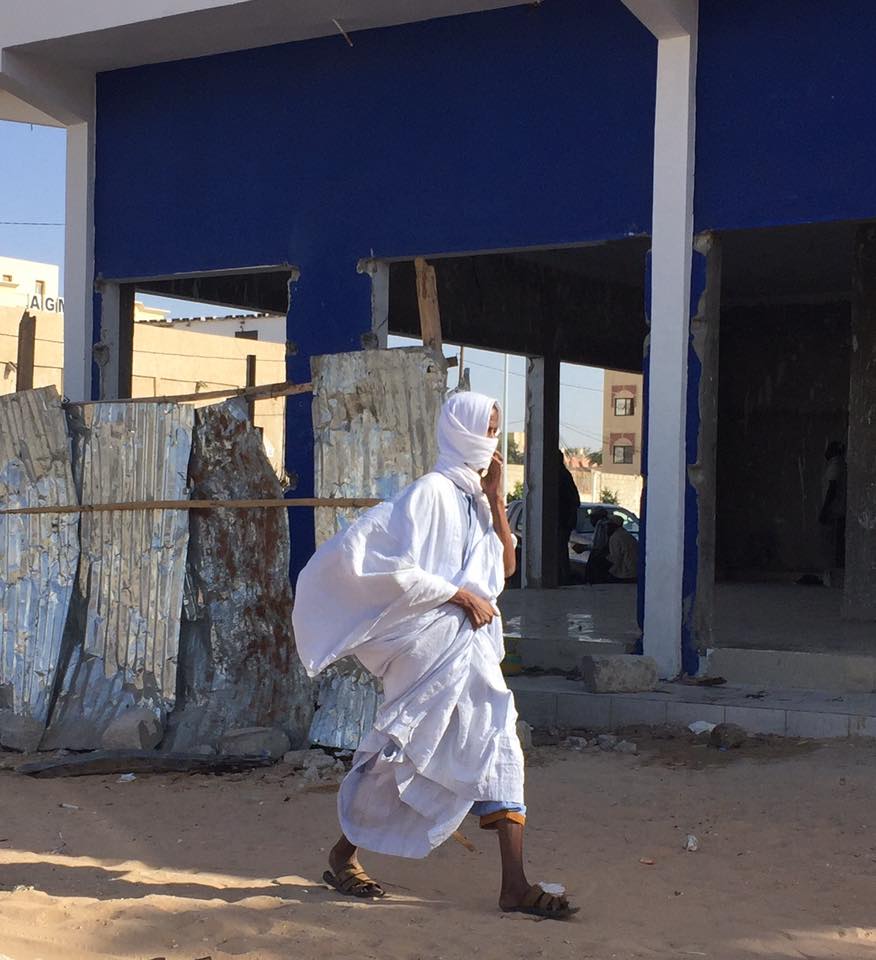 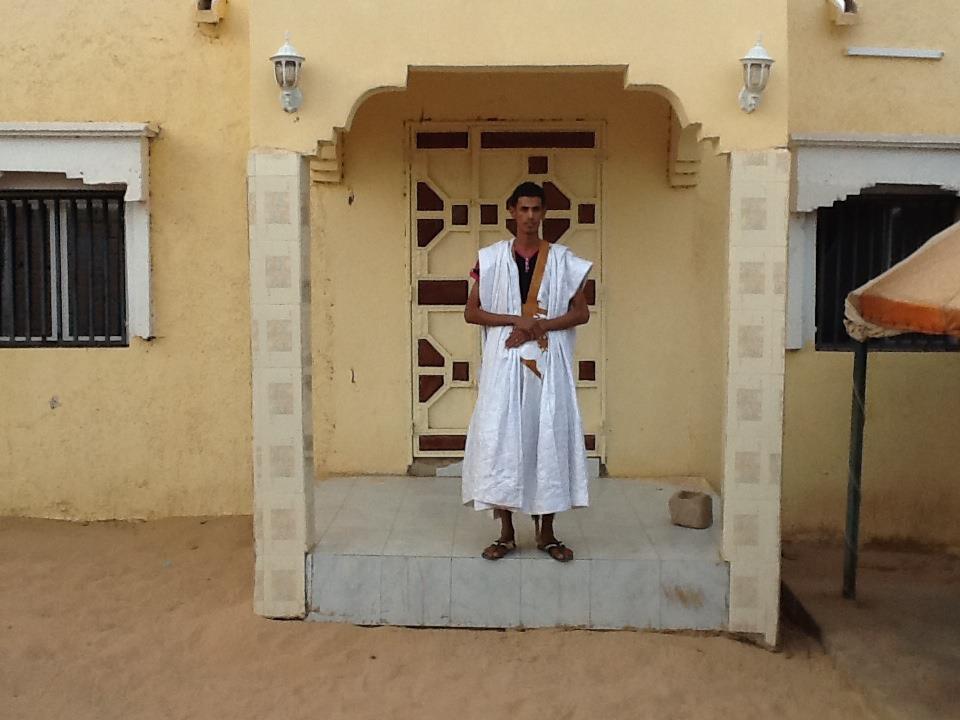 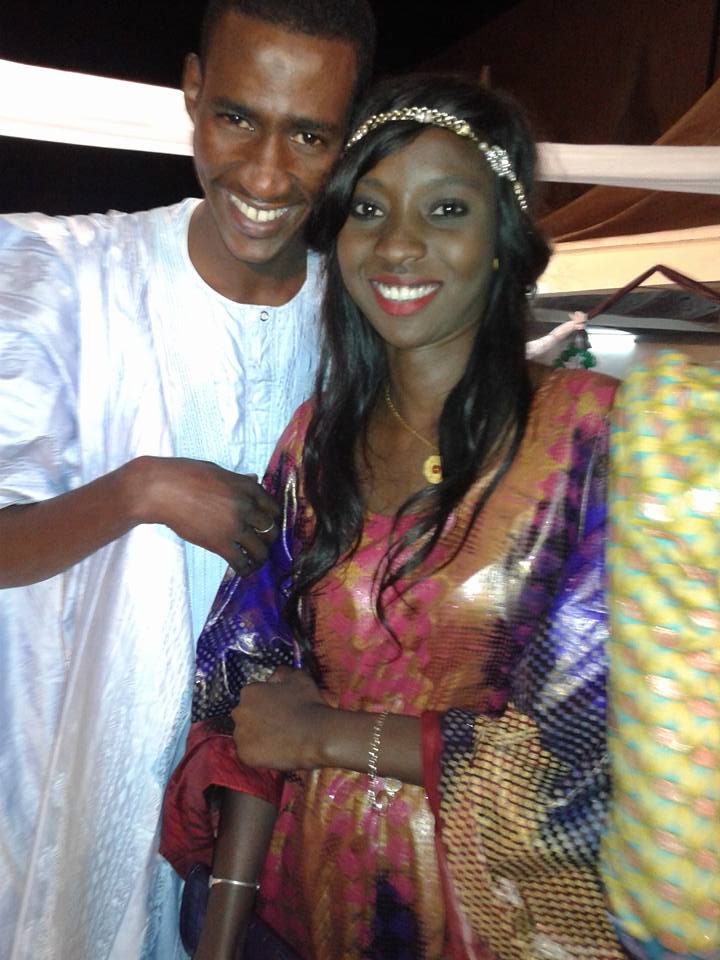 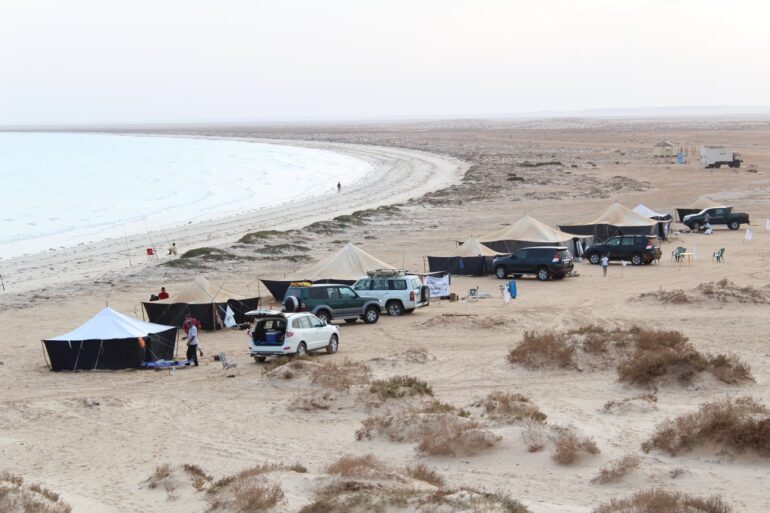 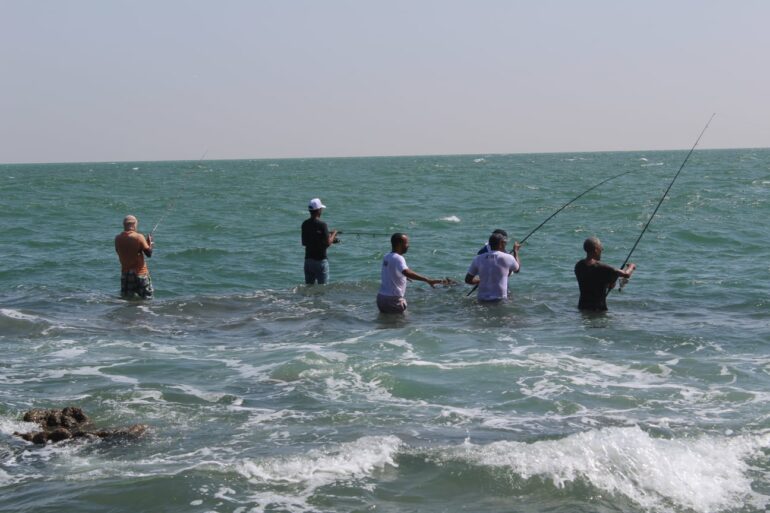 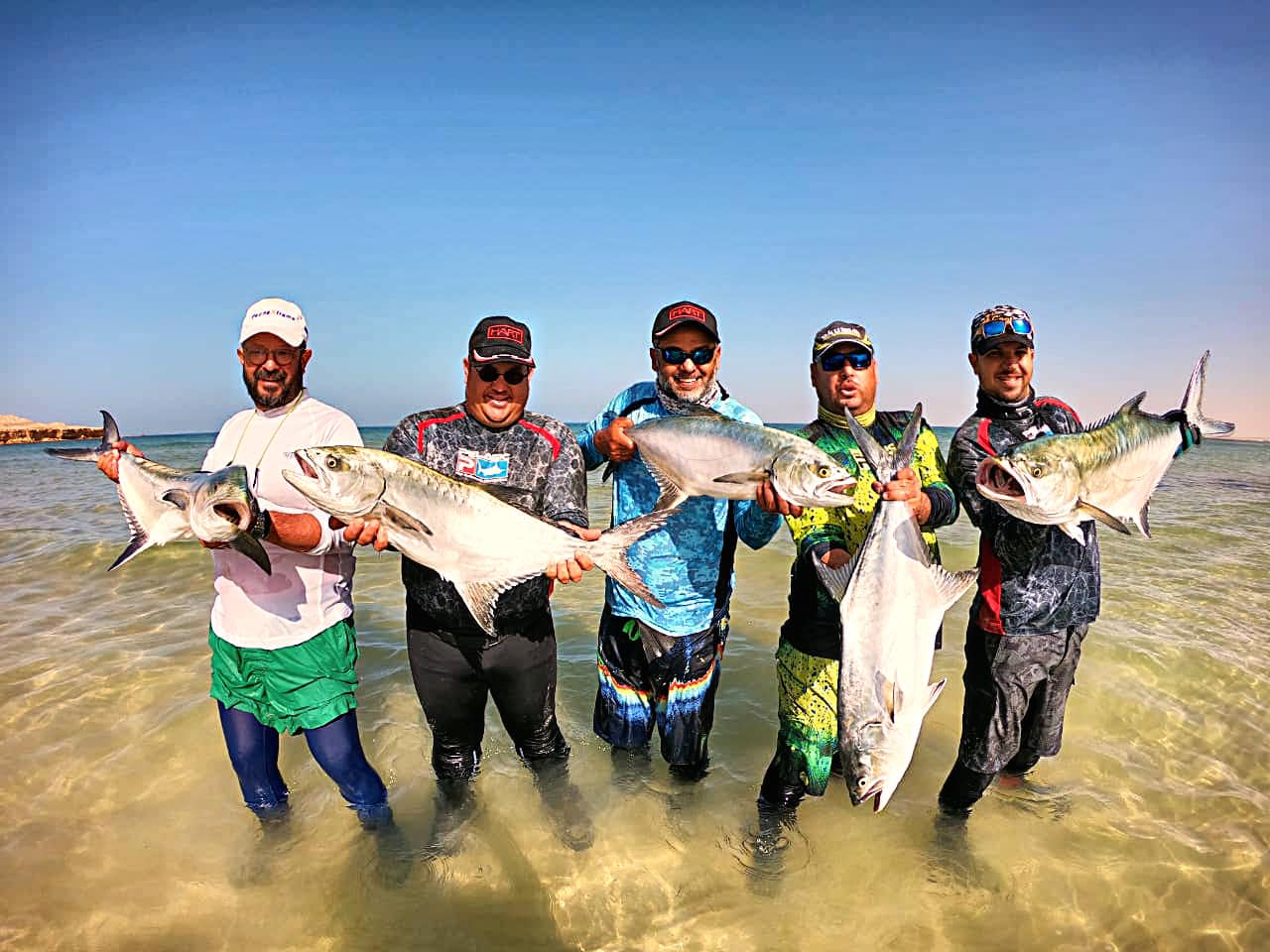 Its name means "Location of the Winds." It did not become a capital until 1960. 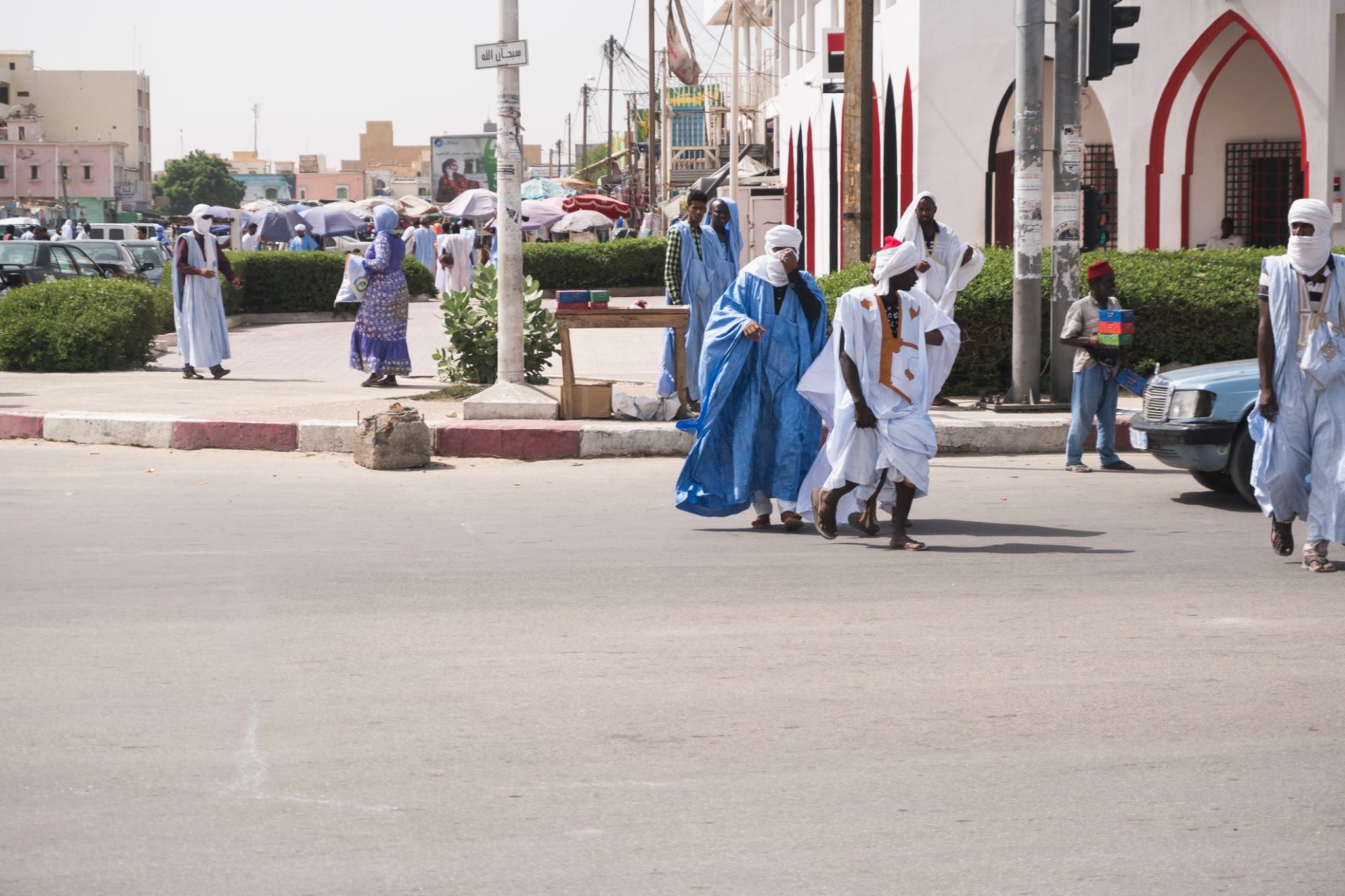 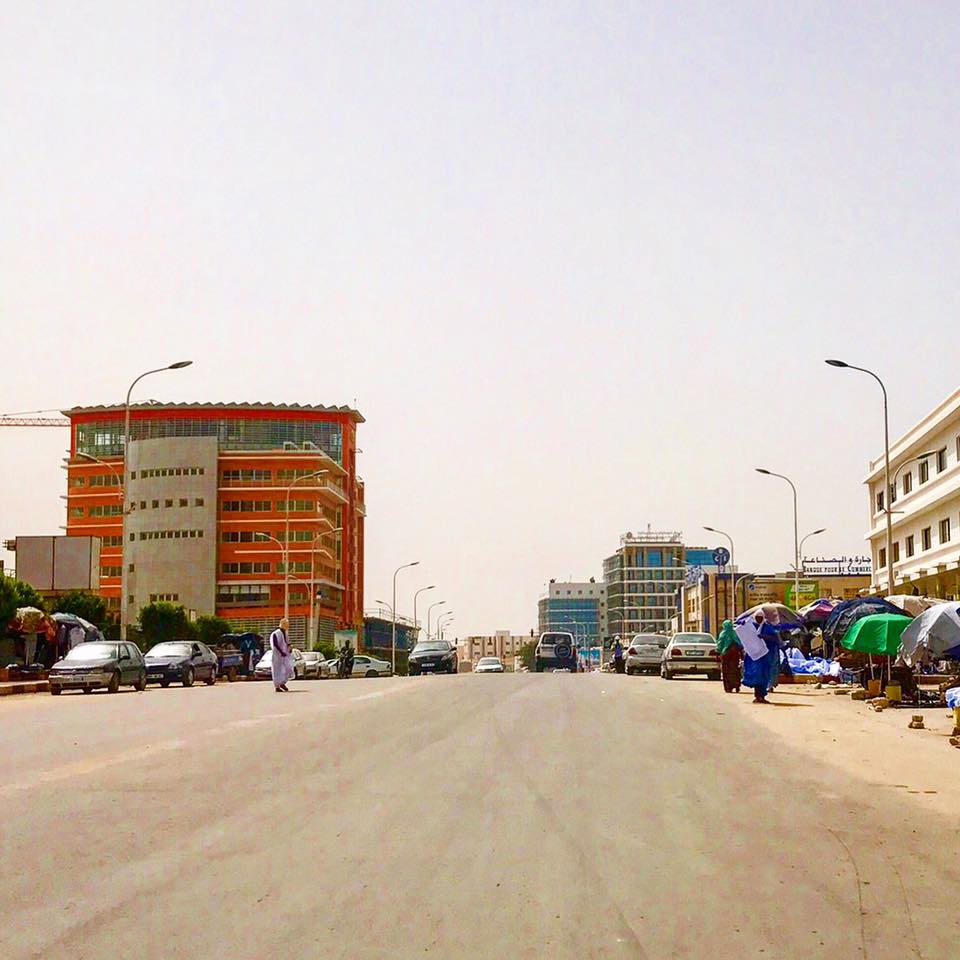 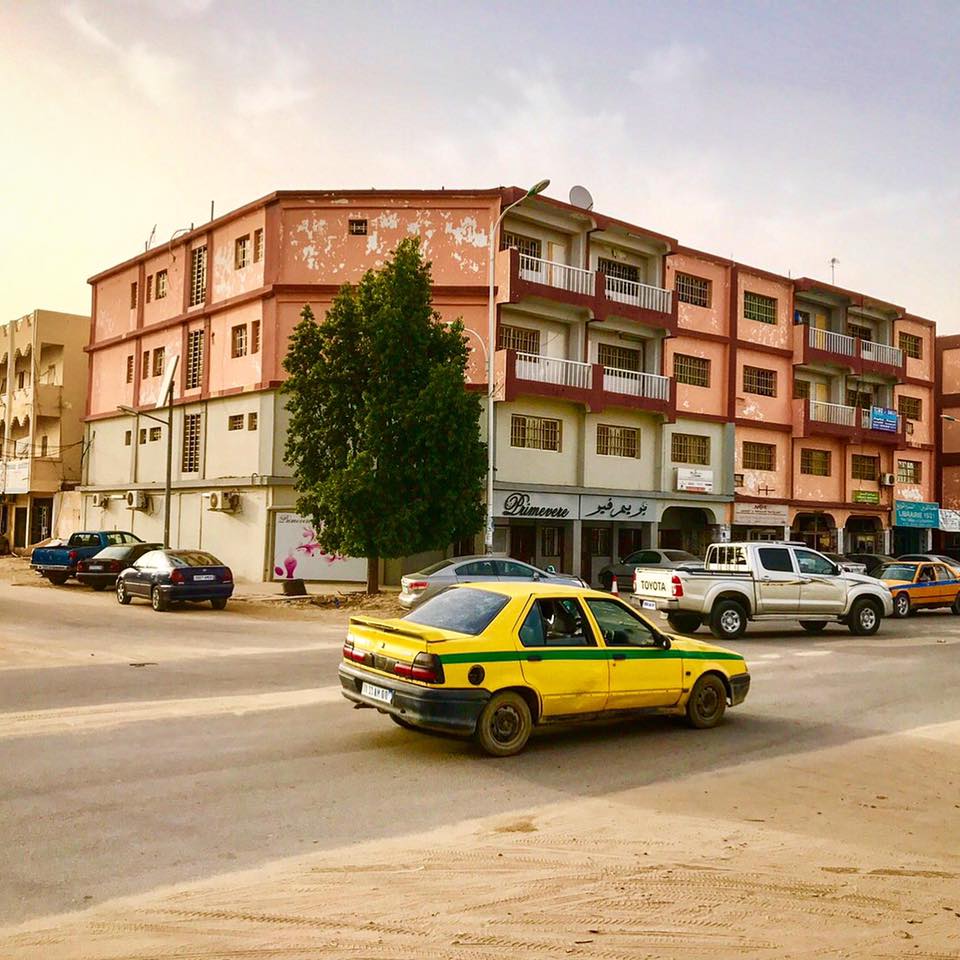