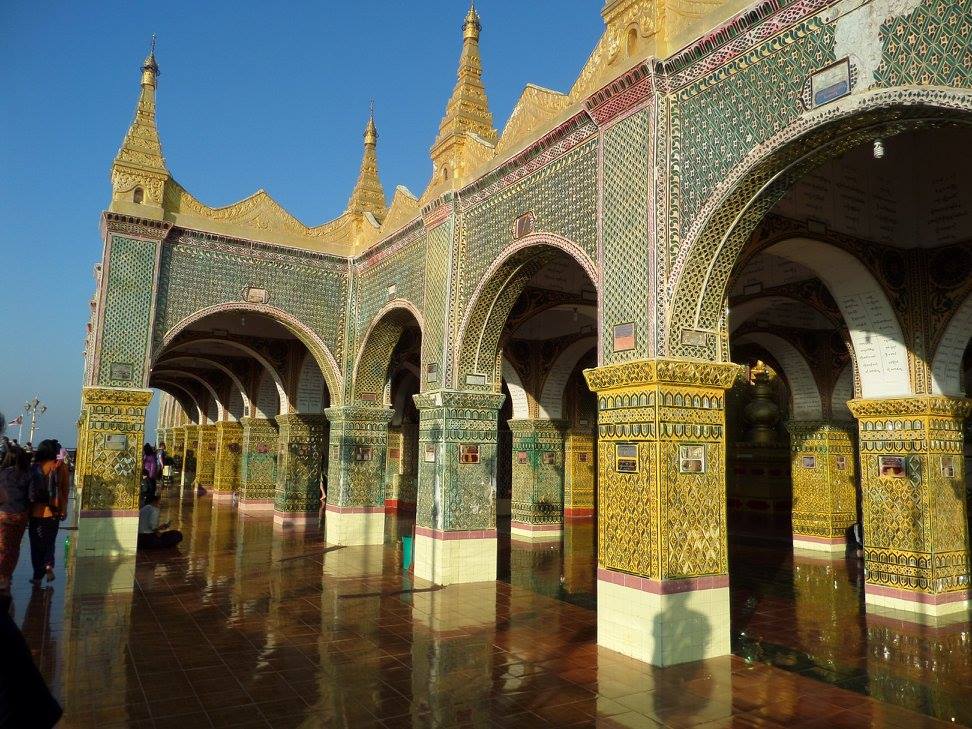 1. We traveled by bus from Yangon, and from the inside, the bus felt like an airplane. It was very comfortable. The journey took approximately 9-10 hours.

2. Min Kun – We liked the beautiful temples, and the big elephant built from stone

3. Waterfall: Dat Taw Gyaint was beautiful. You can travel from Mandalay by car – Uber or something similar – for 5000 kyats one way. You have to walk for a good hour to reach the waterfall, or you can go by motorbike

4. Good hiking. We were in sandals, but for hiking, you’d be better off in decent boots. If you arrange a time in advance, a tour company can pick you up and bring you back to your hotel. At the waterfall, I like that there were benches, chairs, and a small café where you could admire the waterfall. It was a pleasant experience, and I was sorry we hadn’t given ourselves an hour or two more to spare.

5. The people were very friendly. Taxi drivers sometimes tried to quote us an unreasonably high price, but most were very helpful.

6. Mandalay Hills, and the huge number of pagodas

1. We traveled out to Amarapura and visited a monastery, where the monks gave us a tour. In the end they expected a donation. My understanding was that the point of a donation is that the giver can give as much as seems appropriate. The monk, however, criticized my friends and me for the amount we gave, which didn’t sit well with me – especially coming from a monk.

2. We saw the world’s longest wooden bridge at Irrawaddy, the U-Bein bridge, but there were so many people that it was impossible to walk comfortably on it. 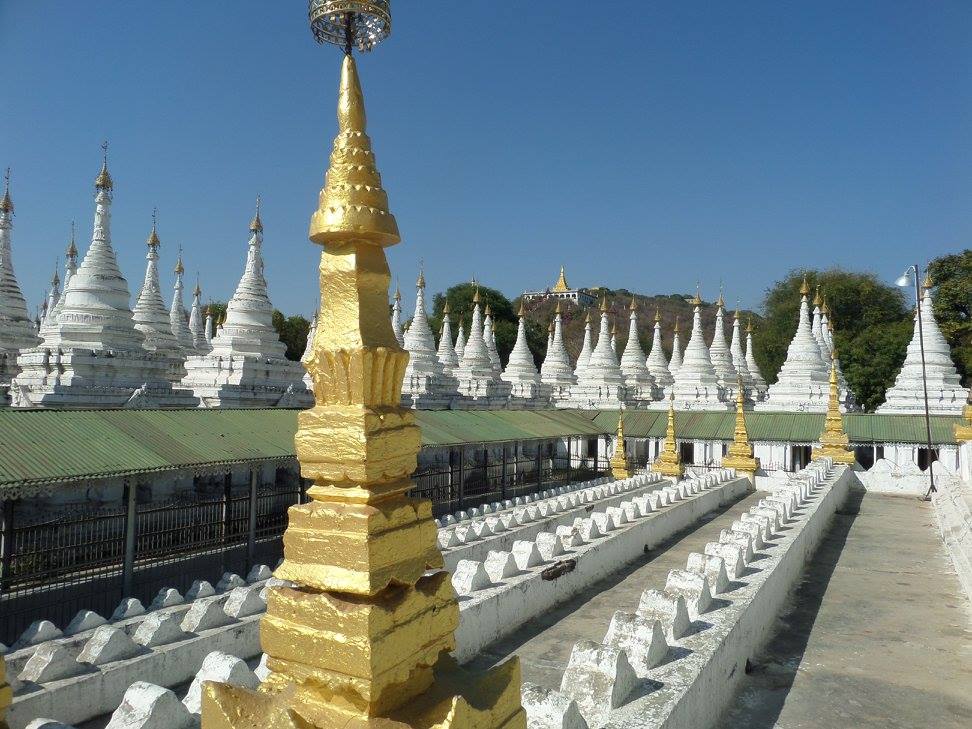 “The other travelers we met with didn’t have much good to say about Mandalay, but it was our absolute favorite! In this city, which is the second-largest in the country, the streets are numbered in a system reminiscent of New York – using numbers instead of names. This makes it easy for visitors to get their bearings. Beyond that, however, there aren’t many of the things that usually characterize a big city:

Mandalay is more like an enormous, sprawling village. The fact that we had such a good impression of this city was due, first and foremost, to the pleasant experience we had of our accommodation. The guys who worked at the hostel were friendly and polite, and we absolutely didn’t have the impression that they were trying to squeeze money out of us at every step, which – unfortunately – is all too common in Burmese hotels.

We also found a few restaurants we were happy to eat in more than once. On a street corner, we found the best mutton curry, served with ‘chapati’ – a kind of Indian bread. As good as any lamb stew I’ve eaten elsewhere. There was also a great ice cream place near our hostel, where we went to often to get little cups of ice-cream in various flavors – a great tonic for the heat!

The first day we took a walk around the downtown area, but we didn’t have to go far before it didn’t feel like downtown at all. One of the streets was like a large market, but almost the only things on sale were onions and garlic. The thing that I’ll always remember about it – aside from the smell – was the way one guy bit into a garlic bulb like he was eating an apple!

Despite the pretty-sounding name, this is not, in fact, an attractive city. Not that I want to completely talk it down – there were things about it that I liked, and we spent two full days there. We asked our hotel to arrange a taxi for us, and the guy they called was so nice he became our driver for the whole two days.

On the first day, we explored the palace and the city center, as well as the hilltop temples. Unfortunately, the temples here (as in Vietnam) are often decorated with strings of LED lights, and sometimes there are even twinkly lights around statues of the Buddha.

The palace, I have to say, is nothing special. The original was destroyed during the Second World War and was only rebuilt in the 1990s. The wood carvings (and the whole place is made of wood) just aren’t up to scratch, and there are lots of empty spaces, surrounded by wood columns. The Shwenandaw monastery did survive the war, and it’s a marvel – I’m sure the palace was similarly impressive in its day. If you want my advice, I’d recommend skipping the palace entirely. (Agnes, 2017)

Mandalay has an international airport located 35 km (22 mi) south of the city. 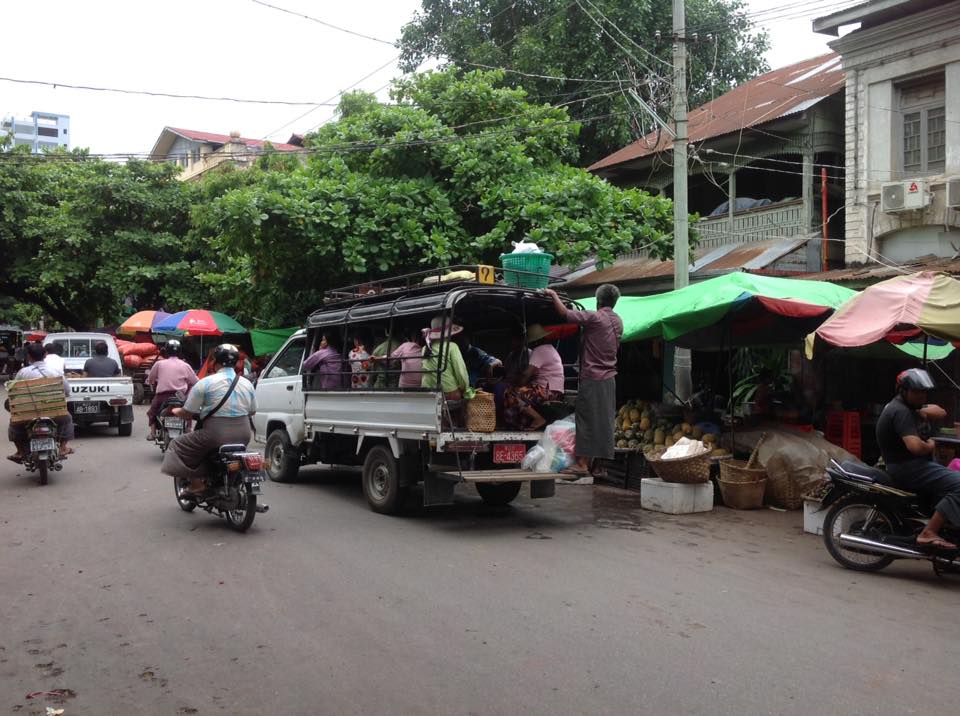 “There is much more to see in and around Mandalay than you might think at first. We have encountered almost no foreigners in the streets, yet there is a place where people can exchange information with each other. This is none other than Shan Ma Ma, a street-food restaurant with plastic chairs set out on the street, on 81st street between 33rd and 34th. The food is fantastic, and the prices are simply unbeatable. Mama Shan and her family prepare the most mouth-watering dishes in Burmese Shan cuisine, offering unlimited servings of rice along with countless variations of meats and sauces, and by good fortune, Myanmar beer is served in large bottles. As tourists staying in the city gather here in the evenings, the kitchen is aware of Western hygiene expectations.” (2018)

“” WOOOW holy moly, this food is hot!!! The staff giggle as they watch me heroically confront a blisteringly spicy piece of crab meat. I only manage to finish it thanks to my macho pride – we don’t cry in public! Meanwhile, my glasses are misting up. That's the way it is in Mandalay. They’re used to fried bird spiders, though only if they’re fresh. This passion for freshness is sometimes taken to extremes, as when the street vendor plucks the live fish from a bucket, skewers it, and places it over the glowing coals. Foreign animal rights activists quietly vomit in the street corner.” (reves, 2019) 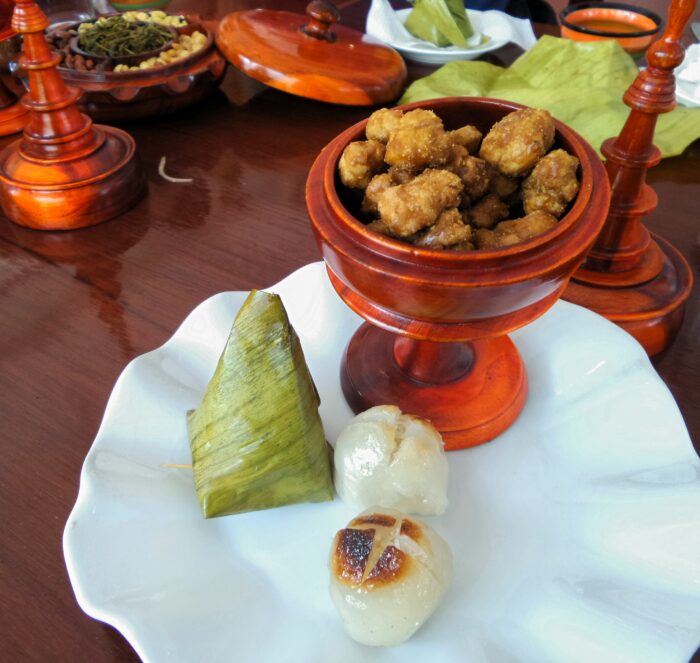 Unlike in Bagan, in Mandalay, you can not buy beer, and other alcoholic beverages in any store, only in specially designated shops. To order a beer in the restaurants is not a problem.

Jade Market
“At the bracelet department, the bangles of glittering green stone clatter over one another. The vendors are crowded in along the row, selling their wares. Behind small tables sit the high-powered shoppers, rotating each piece of jade in bright light, tapping it, scanning it, then pushing it back with a dismissive wave. With a false smile on their rogue's faces they suggest a price, then watch the reaction with the hidden attention of poker players. They know everything about the human soul, and they play the game a thousand times a day. The sales volume is enormous – after the drug trade, this is the biggest business in town.” (2019) 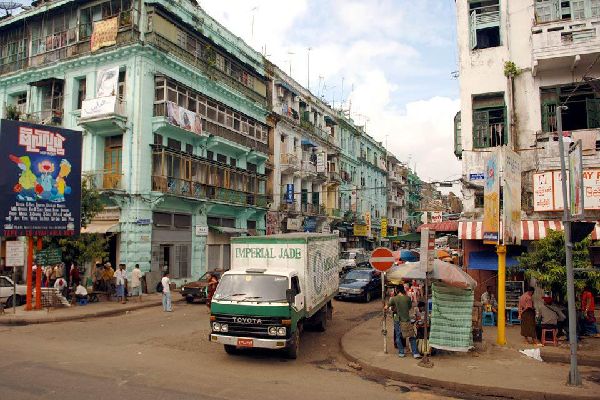 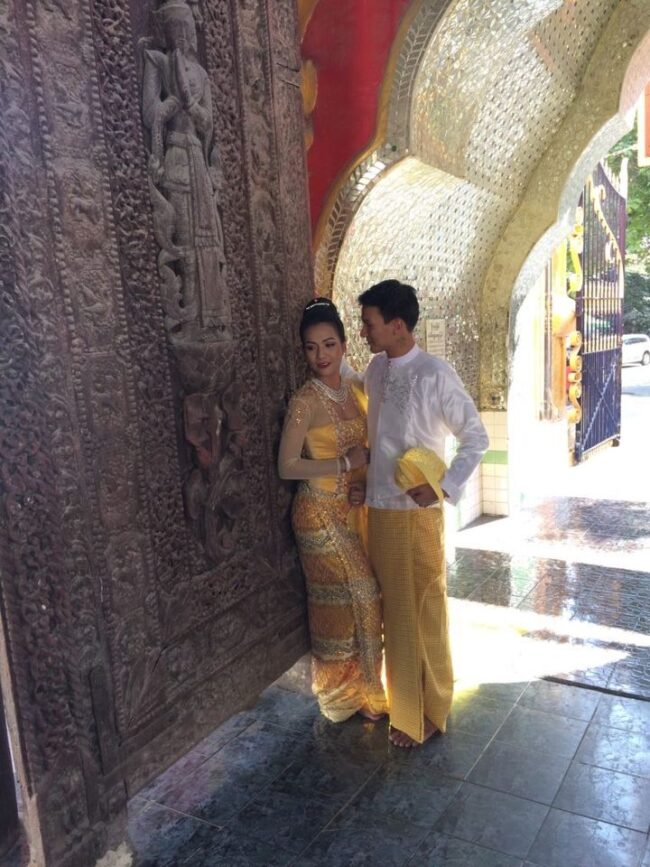 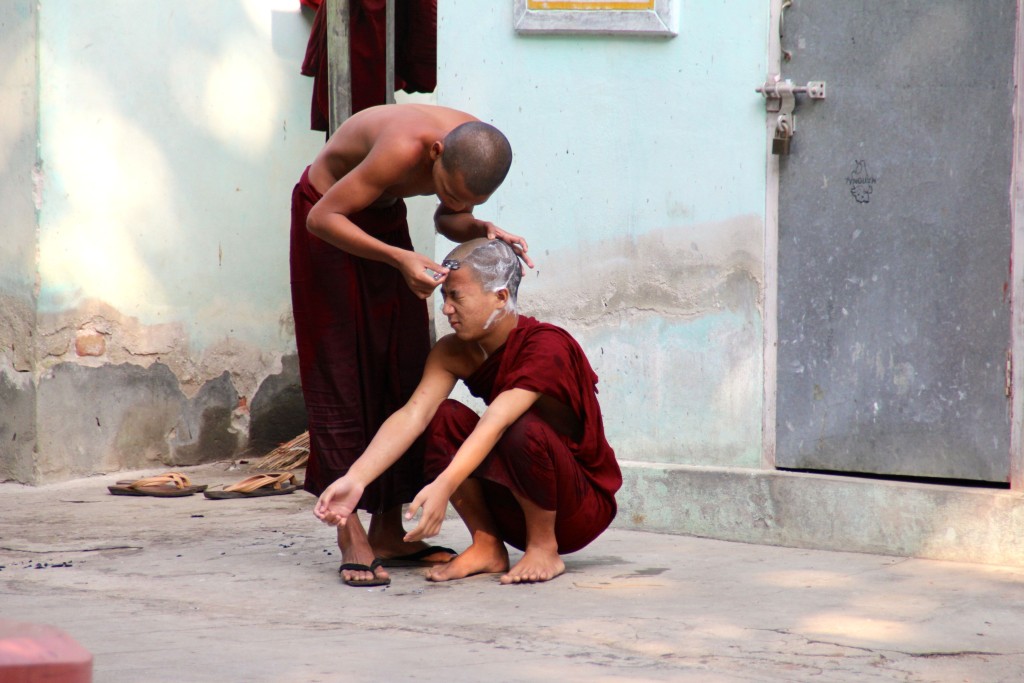 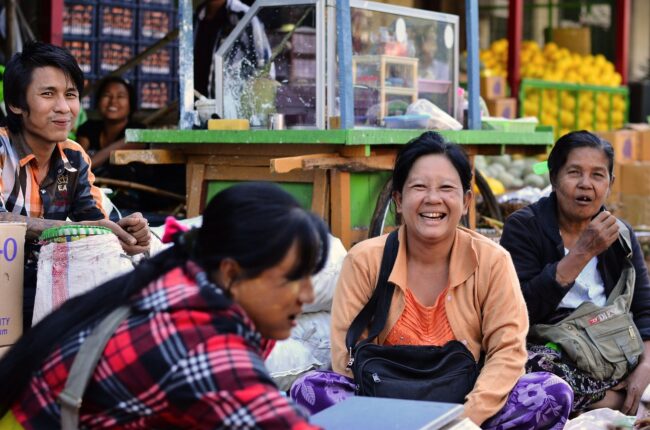 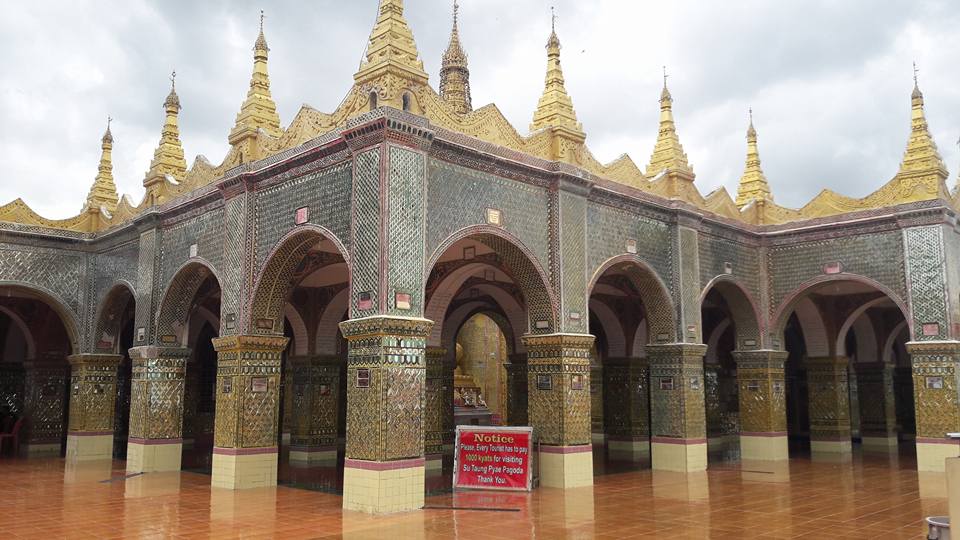 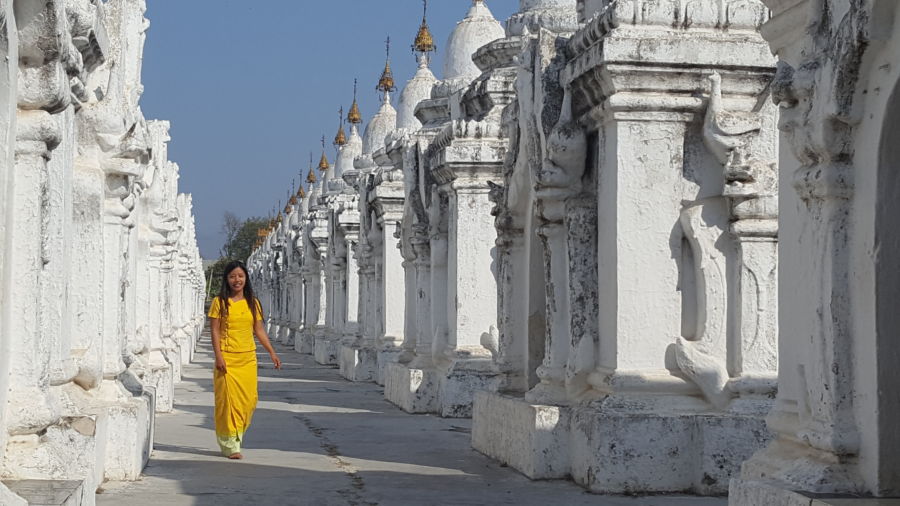 “Model buildings!!! Don’t miss it! There is a whole collection of royal pagodas assembled here from wooden slats and concrete columns disguised as marble. The whole thing is a little worn, the paint is crackling, the wooden walls are rotting as if movie makers had abandoned their film set. The largest model building in the world can be found here. The original was blown up by the Japanese – this is just a modest copy. A barracks was placed in the princely garden, so stamping boots and shouted commands still fill the royal court. A ruler of taste would not set foot here.

“This series of pagodas was founded by the n+1th queen. Among the usual needle-tipped golden pagodas, goldfish suffocate in a half-meter pool as visitors ceremonially feed them to death. In the tree-lined arcade, unnecessary crafts are practiced, all of which require great patience and perseverance. For instance, several master throne-builders work here, producing ornate thrones on a sort of production line. They have not yet heard that the king has fled. Or they imagine that a queen might happen to be passing by, and pick up a dozen on a whim. There are also sculptors here, Buddha polishers, and makers of gold incense trays. A gigantic, unsaleable inventory is being manufactured.” (2019)