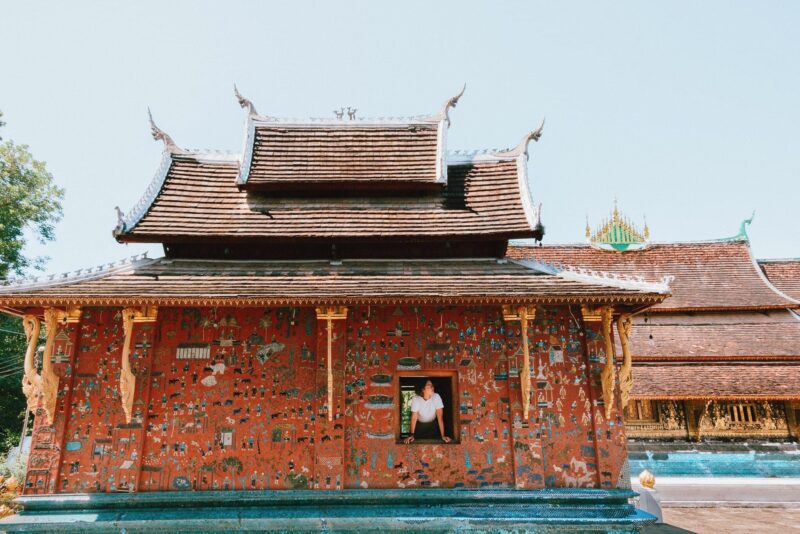 2. Although there are many tourists, you don't feel much crowded, plus the city is walkable, not big.

3. As for the historic attractions, an exciting mix of medieval Laos and the French colonial era

4. In the city's surroundings, you find the most beautiful landscapes of Laos, valleys wrapped in a mysterious fog.

5. A surprising number of churches, nearly 70 in this small town

9. Sipping a cold local beer on a cafe terrace of the Old Town and enjoy the magnificent view of the headland between the Mekong and Nam Khan rivers

11. Interesting conversation with English-speaking monks about their everyday life

12. Top photo subject: in the early mornings the alms giving ceremony with the Buddhist monks in their intense orange attire

1. The tiresome long-distance bus trip to the city

2. Service providers are becoming more and more arrogant as they experience the growth of the tourist influx

3. Not a party town, it can get boring in the evening if you don’t have good company

5. The city lives on nothing but tourism, and so little can be experienced from the authentic Laotian milieu.

6. Its main street (Th Sisavangvong) itself is not particularly attractive, but you can not avoid, as most restaurants, bars, shops, and travel agencies concentrate here.

7. If you happen to eat in the market, you lose your appetite when flies invade the meats, even your dish.

,, The atmosphere of Luang Prabang is lovely:
Monks in orange robes scurry in the streets.
Cafes serve croissants, baguettes, and wine along with Lao dishes.
The majestic Mekong flows calmly nearby.
Green mountains rise on the horizon."

“Luang Prabang was once an independent kingdom, and they say that even today, it remains the spiritual center of the nation. In terms of the number of stupas and wats per capita, it definitely tops the bill. So far as I could tell, temples are not such an integral part of people’s daily lives as in, say, India. At dawn, the monks walk around collecting donations from the population and then, unless it is a holiday, take them into their monastery. Holidays are frequent, however, and can last up to a week.

Luang Prabang has succeeded in reinventing itself as a tourist destination, but without – as yet – becoming totally commercialized. It is a calm city that moves at a slow pace. Tourists are tactfully directed towards central ghetto which provides all the necessary services. Life outside this small area goes on much as before. This seems to work out well for everyone: travelers have everything they need in one place, while leaving locals who would rather not be bothered to get on with their lives in the background. Anyone who has visited Bali and succeeded in escaping the hell that is Kuta Beach has probably been to a small town which is similar to Luang Prabang: Ubud. Here too life is relatively calm, since it is ignored by the hordes of techno fans, and cool little art shops can be found in the side streets.

So far as I can recall, Ubud may have been a shade friendlier, but what really sets Luang Prabang apart is the cuisine. They have a range of specialties, from strong and bitter root soup (interesting…) to roasted algae (delicious!), which are unique even within the already singular cuisine of Laos. Among their culinary herbs, I found one which looks exactly like the leaf of an ornamental hedge back home, but is much tastier!”

“Walking through this city is a bit like exploring a small town in France, though much more richly aromatic. The houses are charming, and there are slatted shutters on every window. Nobody hurries, and life has a peculiar charm. The place has a very good energy. It also feels wonderful to wander amid the beautiful palm trees, in the heat of the day or the cool of the evening. There are plenty of tourists, of course, but somehow they never congregate in one place enough to become a nuisance – except perhaps at the two biggest temples. It’s also true that this sense of tranquility is only really true of the city center, and perhaps also the district located on the small peninsula. Elsewhere the city is pretty noisy and chaotic – just like any other Asian city.

At every step, the traveler stumbles across fascinating temples. Here, it’s enough just to walk along the main street, and it will surely turn into more than a half-hour stroll. It’s a beautiful, well maintained, living place, full of monks, locals and tourists. The whole area is an island of calm, with an indescribable sense of peace.

I had one absolute favorite temple, which – as is always the case – I stumbled upon completely by accident. Time stopped while I was inside, and when I emerged I realized that, without noticing, I had spent one and a half hours there.
The most popular sight, however, has to be the tiny That Chomsi stupa, at the top of the hill, which many minibuses hurry tourists up to just before 6pm. Hardly anyone comes for the temple itself, though, but for the sunset. It’s beautiful, I suppose, if you can even see it beyond the forest of smartphones held up in the air. I deliberately forewent the experience.

The other major temple complex is Wat Xieng Thong, where the crowds are really unpleasant, and it always seems to be full of couples taking wedding photographs. It’s beautiful, of course, but difficult to really lose yourself in the moment.” (2018)

“Luang Prabang is largely situated on one bank of the river, though there are some things to see on the other bank as well. At one point you can cross over on a unique bamboo bridge. What makes it so interesting is that a local family rebuilds it every year, because the monsoon floods always wash it away. For that reason, anyone crossing has to pay the family a toll of about $0.50.

On the other side of the river are three Buddhist monasteries and two villages, so we thought we would embark on a tour of discovery. If you walk down to the riverbank, there’s always a boat waiting to take you across to the other side for about 5,000 KIP ($4).

The boat does not run according to a schedule, but waits until enough people gather, then starts. We went across twice, so a total of four trips, but we never had to wait more than five minutes. There are always a lot of people crossing, not just tourists but locals as well, and there were always one or two monks.

The boats dock right by the market, and from there you can walk straight to the village. We just wandered around. The school was there, for instance, and we just ambled inside. The kids were delighted to see us when we looked in. We talked, or rather showed off, to the lady teaching them English, because she didn’t speak English. Ha ha. Then we simply carried on, walking all around the village. We stopped in a few other places, and had the same sort of one-way conversations as before, but the point is the same. 😉

At one of the village gates we came across a particularly interesting story: Behind a garden wall, a family was sitting in front of their house. And among them was a white girl – that is, obviously not Asian. When they saw us, they immediately called out to us, asking us to join them. Of course we did. They told us that she was Australian, but had married a Laotian, and now they live here.” (2016) 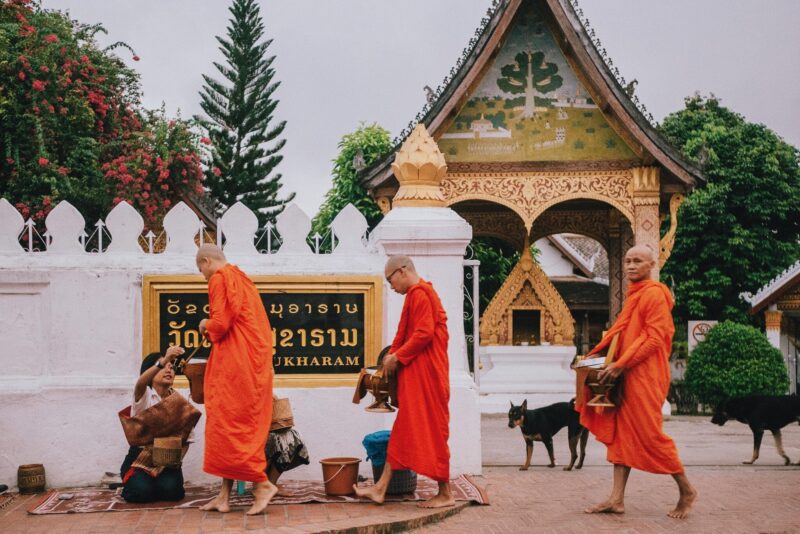 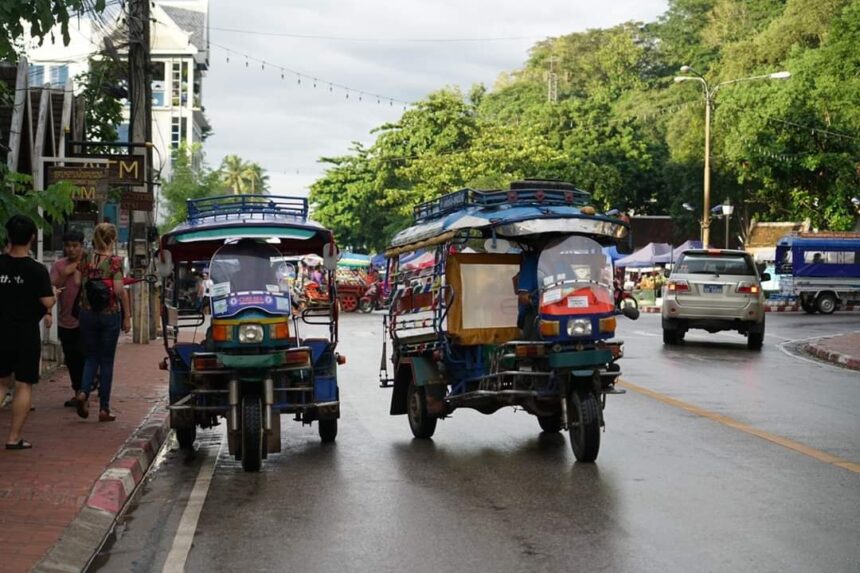 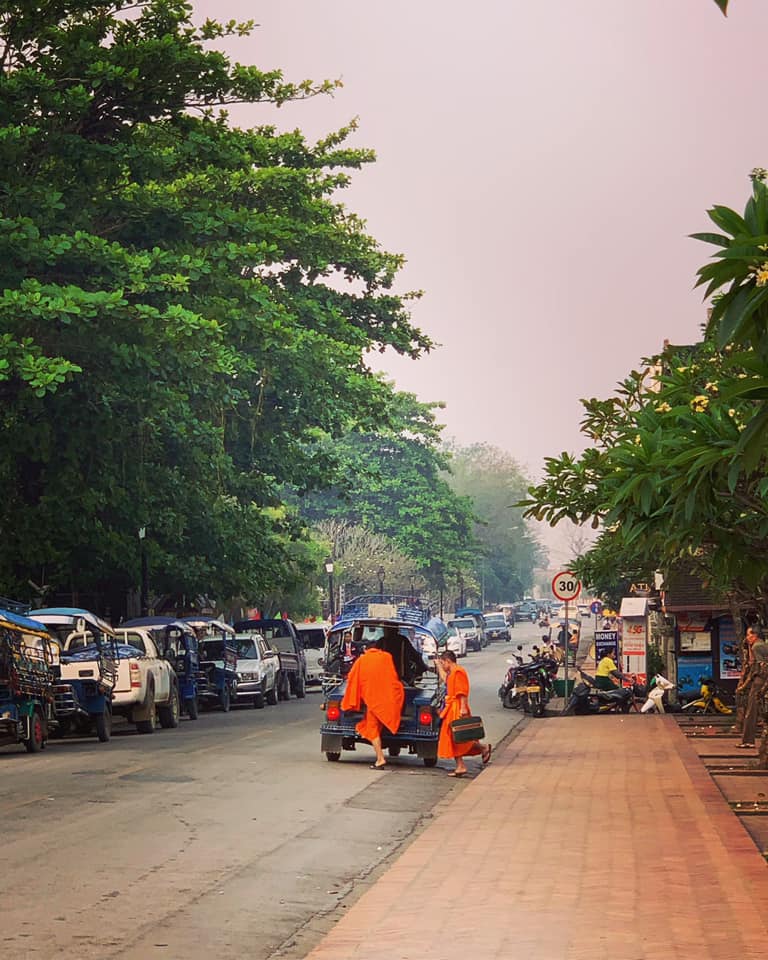 “The legacy of the French colonial period is particularly strongly felt in Luang Prabang, not merely in the architecture, but in the cuisine as well. The city is full of cozy little cafés, serving genuinely good coffee, as well as real, fresh croissants and pastries, and truffle chocolates. This was also the first place on my travels where I found real, good, fresh bread with a crunchy crust. I hadn’t really been thinking about it, but as soon as I saw those baguettes… yeah, I couldn’t resist.
For this reason, it probably comes as no surprise that baguette sandwiches with all sorts of delicious fillings are such a thing here. They come in a huge serving – not the sort of sandwiches you get on trains, with a sad, wilted lettuce leaf and a bit of old tomato sticking out the edge. Here the sandwiches are piled so high with fillings that if a man can fit the whole thing into his mouth and take a bite, he has my respect. Delicious.” (2018) 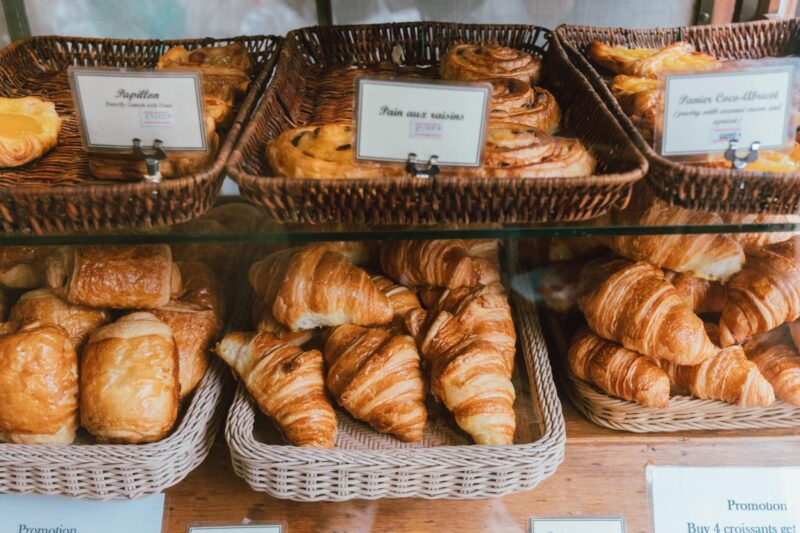 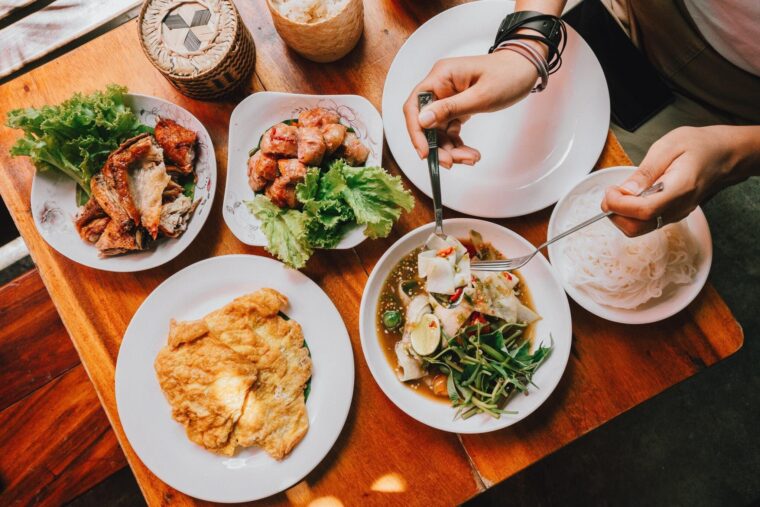 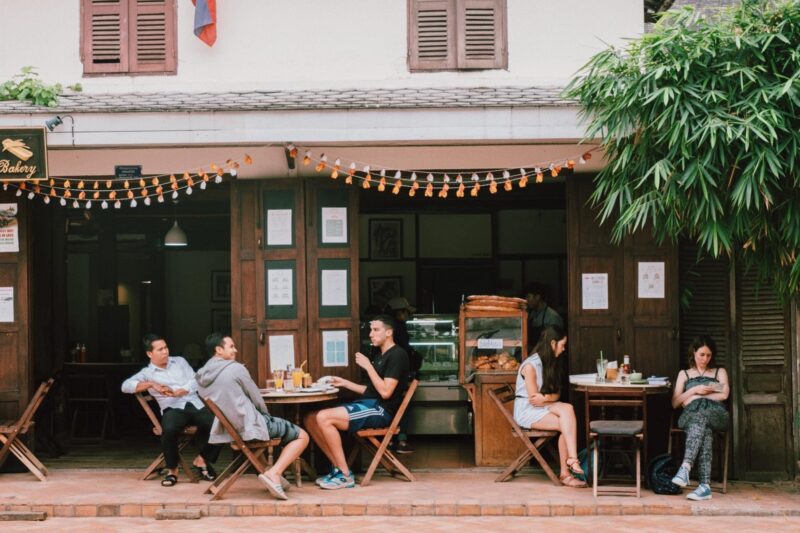 In the evenings, the main street turns into a souvenir market, dominated by handicrafts made by the local villagers. 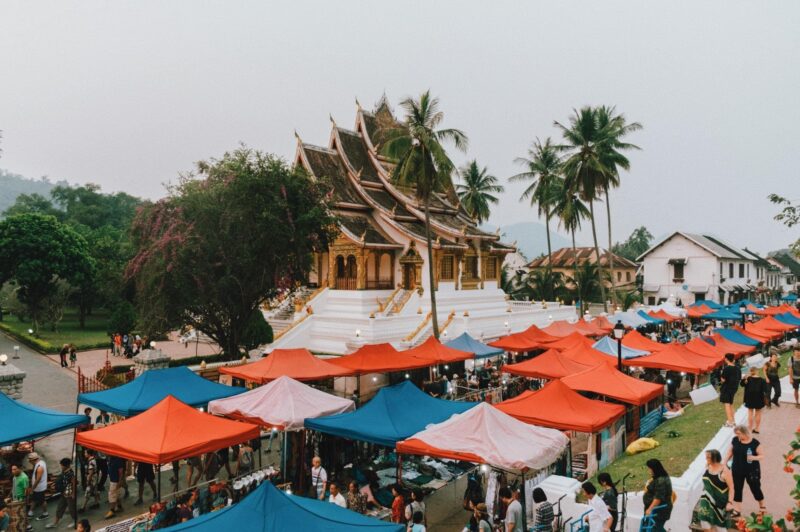 Luang Prabang - market next to the temple - p.b. photo 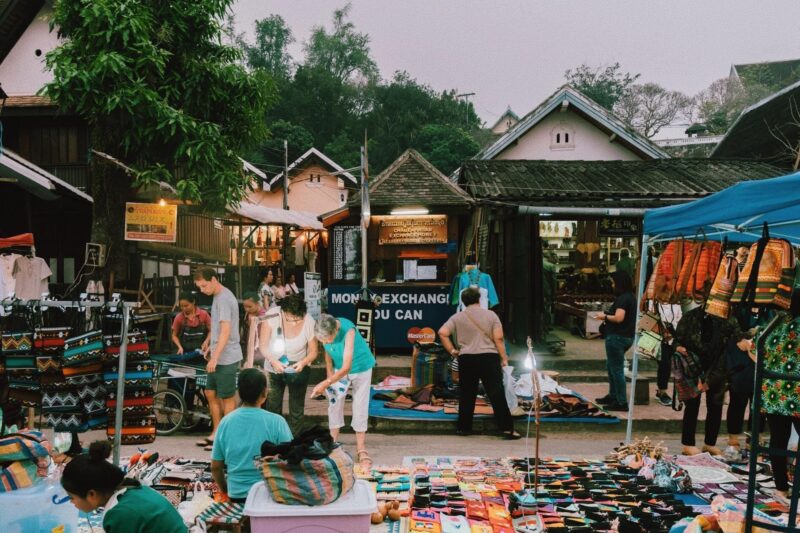 In the north-central part of Laos, Luang Prabang is at the confluence of the Khan River with the Mekong, sandwiched between emerald-green mountains.

Luang Prabang is a quiet, pleasant, and atmospheric town. The historic center streets are built up with two-story houses from colonial times with wooden rails and tiled roofs. When walking around the city, you come across an ancient Buddhist temple every hundred meters. Outside the historic center, Luang Prabang looks like an ordinary village.

Most tourists go to Luang Prabang to see a "cultural and religious show" called Tak Bat. That is an ancient Buddhist tradition: at dawn, monks from the temples go out to the streets of the city with baskets, and the locals give them food (mainly rice). This donation is not charity but reflects the symbolic connection of the secular society with the clergy. Monks receive benefits, and secular people get the opportunity to do some good.

Similar customs exist in other Buddhist countries. The peculiarity of Luang Prabang is the high concentration of temples, and by that, the entire ceremony gets an extraordinary, spectacular dimension.

Luang Prabang was the capital of two kingdoms in its history, and later, the residence of kings during the French colonization of Laos. 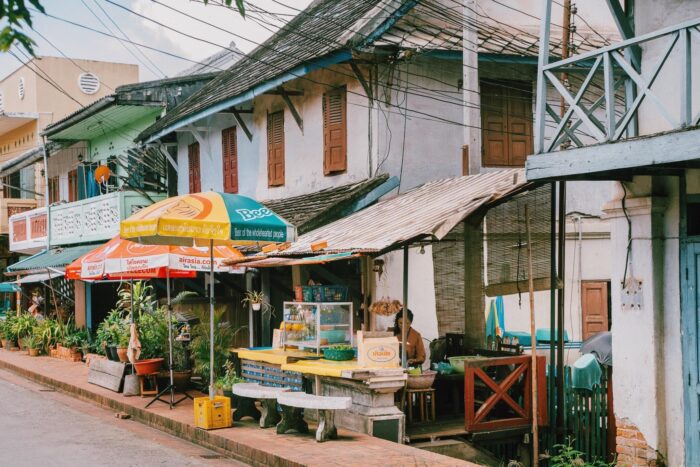 Tak Bat Morning Alms Giving Ceremony became a mass tourism show with some negatíve side effects. Not all tourists are ready to observe etiquette, quietly and discreetly watching the ceremony from the side. At one point in the past, the monks even wanted to stop the ceremonies, but the government - bearing in mind the importance of tourism revenue- forced them to go on. 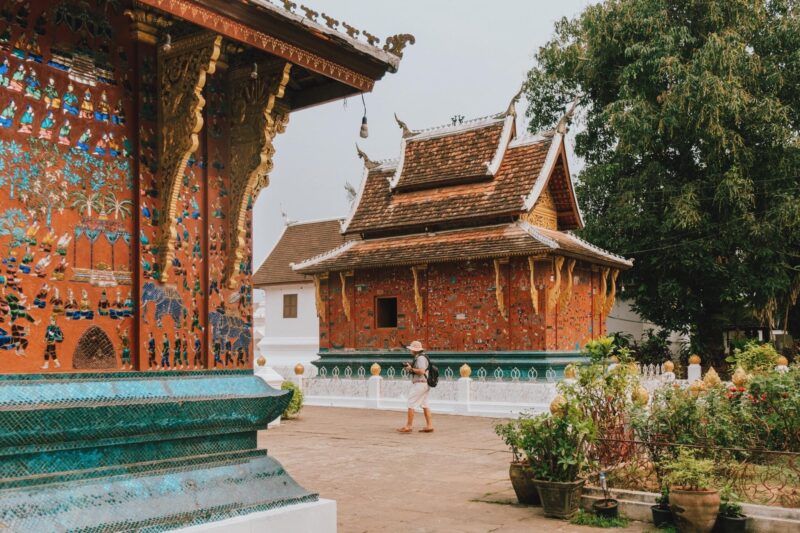 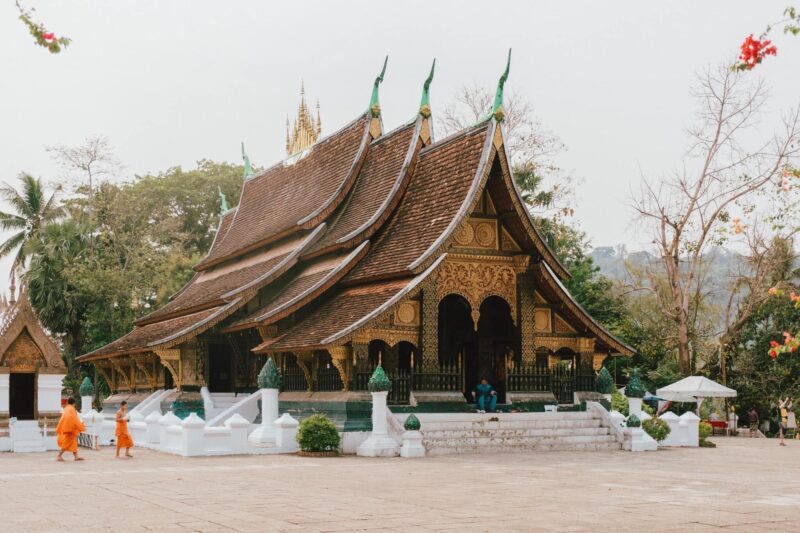 About 30 kilometers from the city, there is a cascade of marvelous waterfalls of Kuang Si with turquoise water. The main waterfall falls from a height of 54 meters, followed by a cascade of smaller waterfalls. The water's beautiful milky-turquoise color is a result of the minerals dissolved in the water. Some sections of the cascade are suitable for swimming.

,, At almost every corner of the city, rickshaws offer a tour to the waterfalls. Their prices are excessive, about 25 USD/trip. For renting a bicycle or motorbike, all agents asked to leave a passport as a deposit, which we did not want to do. As a result, we agreed on a group tour by a minibus, organized by a travel agency, for two of us about 15 USD. The main disadvantage of the trip was the limited time. We had two hours only to visit the waterfalls before the bus went back to the city. That limited time allowed a short look at the cascade, taking photos and take a quick swim, once only.
Swimming in Kuang Si turned out to be much more pleasant than in the Blue Lagoon of Vang Vieng. The water is just as cold, but the bottom is rocky, not muddy. The deepest cascades were busy with crowds of noisy tourists, but we were able to find a secluded spot where we swam all alone." 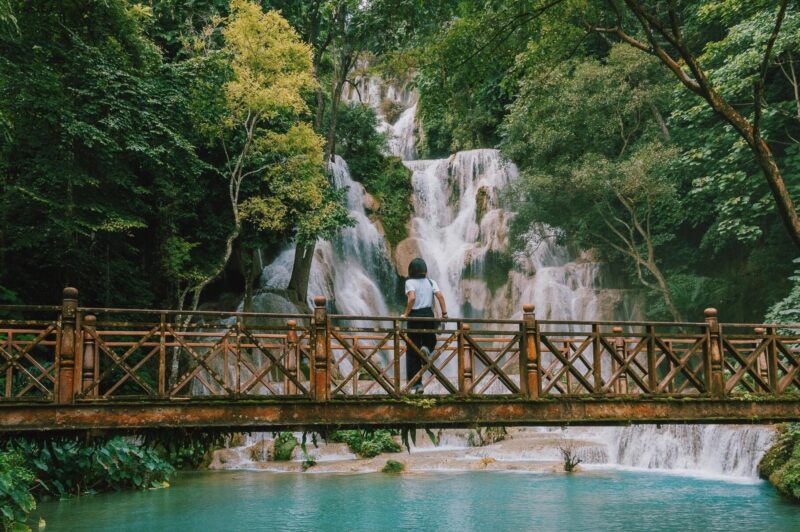