1. The lively atmosphere of the central promenade in the evening
2. Cocktails made from freshly squeezed fruits
3. Total safety (no rocket attack has ever hit Eilat)
4. Snorkeling in the Coral Reef Natural Reserve on the public beach in front of the Isrotel Princess (hotel)
5. The Underwater Observatory Marine Park (a several-hour program)
6. Jeep tour in the mountains (Desert Eco Tours)
7. Eilat Shamamon, the newer part of the city with its lovely architecture and rows of shops
8. A one-day tour with biking in Timna Park and the Red Canyon
9. Coral Beach, glass-bottom boat tour
10. Dolphin Reef
11. Cheap tickets for the local buses
12. We enjoyed the 22-23°C temperature in December
13. Just to include a cultural program as well: Kings City, a biblical theme park

1. What a shame: on my first snuba (not scuba!) diving, I panicked down in the water and asked to get back to the surface
2. I didn’t enjoy the camel riding part of the Bedouin program
3. The bars blaring techno music
4. Overdevelopment is putting Eilat’s tiny, limited capacity coastline and its infrastructure under pressure
5. The city center is not very attractive
6. The prices in the nightclubs are way too high
7. Restaurants are expensive as well
8. Our hotel’s pool was not heated, its water was freezing so we couldn’t swim in it
9. Many tourists ignore the smoking ban in some public spaces and nobody tells them to put their cigarettes out

“As a local inhabitant, let me make a few remarks. The stalls have (unfortunately) disappeared from the beach.

Planes flying to and from the airport don’t cause too much noise. They land by the sea, right next to the main road towards Tel Aviv, and there the noise is much more of an issue.

The city center really does look awful – they should bulldoze the whole thing and start over. In its defense, though, the city was constructed in the 1950s, on the other side of a wide desert, and at breakneck speed, since the nascent state of Israel had to house not only the survivors of the concentration camps in Europe, but also refugees from the revolutions in North Africa.

On the other hand, they’ve built a beautiful new neighborhood, Eilat Shammon, with wonderful houses, promenades, rows of shops and villas. No tourists ever visit it, which is a shame – it’s worth a look.

Traffic peaks in the city on Friday evenings and all day Saturday, since that’s when Israelis come to the beach. About 5% of the population is religious, and they stay at home on the sabbath, but all the Russian delicatessens are open, and on almost every corner you’ll find a little non-stop shop where you can buy groceries, drinks, beer, light wine and chocolate. Buses don’t really run at such times, but by Saturday afternoon they do, and flights start up again after lunch.

Throughout the city and along the coast roads there are countless roundabouts. Public buildings are all ornamented with wonderful decorations.

At the end of the day, all beaches are boring – even the Greek, Italian and Spanish ones – and here too there are a lot of tacky souvenirs and overpriced café terraces. If you want to see something more meaningful, you’ll have to go a long way by bus or taxi. Yes, here as well… At least in Eilat the taxis aren’t too expensive.

Coping with the 40-45°C heat is no problem, either in the sea or out of it. Somehow you find yourself sweating less than at 30°C in a big city. The humidity is about 10% in summer, and there’s always a breeze, though that too is warm, and it dries the sweat. Hotels, shops and apartments are all air conditioned. If you’re in a shop and they see you’re lobster-red from the heat, they’ll generally offer you a free glass of water, or several if you need it. I wonder if anyone would do the same in a European capital?

The beaches are free everywhere, but you have to pay to rent a sun lounger. In Eilat I think there are only two hotels with private beaches for the exclusive use of their guests.” (Ágnes, 2016)

Eilat is far from any other Israeli city. Partly that ensures that terrorist threat in Eilat is kept to a minimum. There is no local Arab population. Amateur and professional Palestinian terrorists find it too complicated and risky to commit a terrorist attack in Eilat. So, Eilat is one of the safest places in Israel. The nearest somewhat risky town, Be'er Scheva is approx. 240 km (149 mi) away. 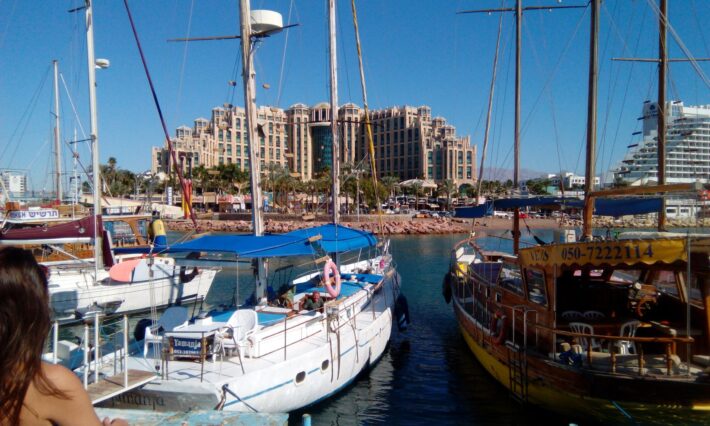 Eilat is a famous vacation resort city at the southern tip of Israel, 309 km (192 mi) from Jerusalem, and 346 km (215 mi) (about a 4-hour drive) from Tel Aviv. Eilat is the only Israeli city on the Red Sea coast. Its main attraction is that the temperature of the seawater allows you to bathe all year round. Even in winter, the sea is slightly warmer than 20 degrees (68F).

Eilat is an artificial city, created to become a holiday destination after the birth of the state of Israel. The permanent population came from other cities of Israel.

The handicap of Eilat is that the Red Sea coastline is only approx. ten km (6,2 mi) long, and this short section accumulate too many hotels, tourist, and commercial infrastructure.

It practically never rains, there are occasional minor showers at most in winter (especially in January).

Temperatures can be above 40 degrees (104 F) in summer, so we don't advise you to travel to Eilat in summer. In the winter months, the daytime temperature is around 20 degrees ((68F), approximately 10 degrees (50F) at night.