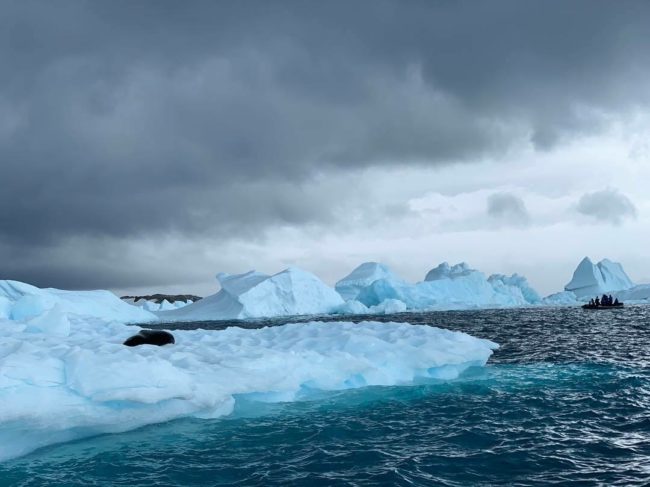 Antarctica - look around on a speedboat among icebergs - Sergei's photo

1.The marvel of South Georgia, the Antarctic oasis", the, Galapagos of the Poles," even if it is not yet Antarctica, about halfway between the southeast coast of Argentina and the Antarctic continent

2. the literally dazzling icebergs of Antarctica

3. when we first saw Antarctica from the plane

4. Waiting for the boat, we really enjoyed the few days we spent in the town of Ushuaia and its surroundings

1. The unsolvable problem is that due to the climate, tourists have to travel there during summer, but right during that time, the landscape of Antarctica is not authentically white; the icebergs look less dramatic.

2. Setting off in the knowledge that unpredictable weather means that landing on Antarctica could be called off at any time, even at the last minute

3. The great distances involved mean spending a long time on a cramped ship, which is bad both for your health and your mood 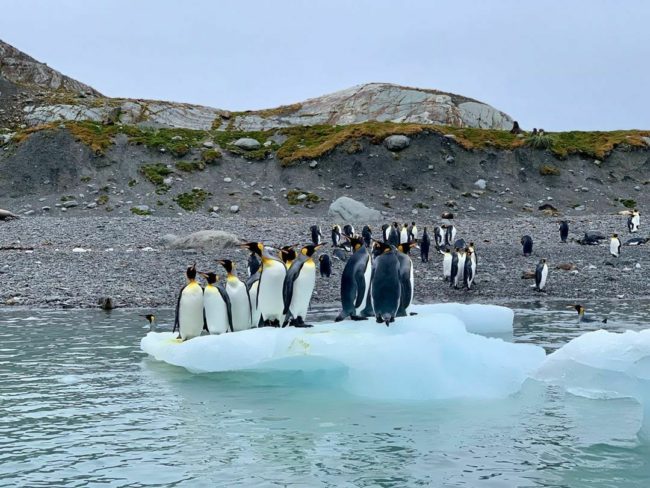 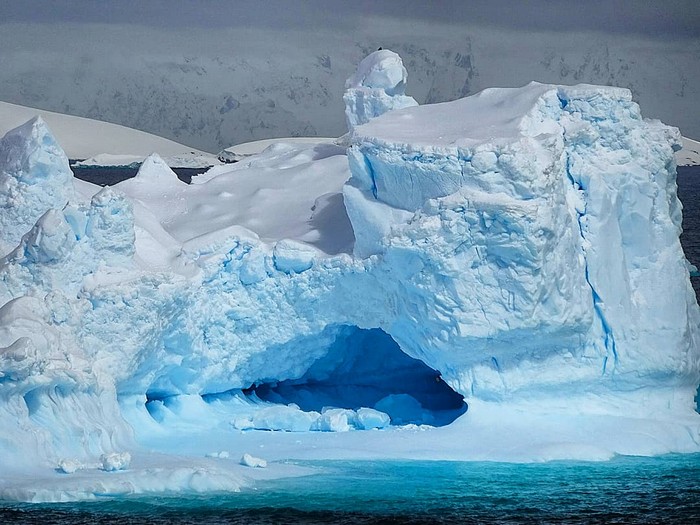 ,, We lived in the containers of the Russian research station. The cook was a pope, and we ate in their canteen (stolovaya). In other matters, the staff members of the Chilean station took care of us.  We were there in January, and as Antarctica has six months of daylight in its summer, it was never dark." (Karcsi from Hungary, 2017)

“Visiting Antarctica isn’t as complicated as many people think, though it costs a lot (ten to fifteen thousand dollars) and you’ll need to set aside three to five weeks for the trip. We flew from Punta Arenas, Chile, to a peninsula, and from there we were taken to various types of terrain aboard a small-capacity military motorboat called a zodiac.

We were afraid that weather conditions would make it impossible to land on Antarctica – a trip we’d invested so much time and money in – but it was reassuring that the travel agency did everything humanly possible to ensure that we reached our destination.

On the advice we read on online forums, we chose a travel agency called Freestyle Adventure. We were travelling towards the end of the season, which meant that the range of options was more limited. The cheapest option, a five-day tour, included a visit to the continent of Antarctica and also South Georgia, of which at the time we knew nothing. We chose the sixteen-day Albatross Expedition, which cost $6600 per person, including a two-person cabin and all meals.

On the first day we entered the Drake Passage, which is one of the most dangerous bodies of water on earth. We were lucky: the sea was calm for us. The first dock was at Great Wall Station – chiefly for the Chinese travelers who made up half the passengers on board. Great Wall Station is the Chinese research base, and here we were able to use our mobile phones. This still isn’t technically Antarctica, however, which would only be reached on the fourth day, with our arrival at Portal Point.

Around Antarctica you can see whales, penguins, seals, and blue, glowing ice surfaces. Even just the fact of being able to get so close to the southernmost point on our planet was a great feeling in itself. Like our travelling companions, we were blown away by the unique character of this voyage. It was totally unlike any travel experience we’ve ever had, before or since. The landscape is breathtaking, and so unfamiliar that we barely noticed the wind, the cold, and other adverse conditions.

On the third day we reached South Georgia. Even before we boarded the ship, many people told us that this island is something totally unique in the whole Antarctic region. We were extremely fortunate that our sixteen-day tour included a stop at this island, which is home to 20-30 people and approximately five million (!) king penguins. The island is green in summer, and extremely beautiful. This is a British overseas territory, and our passports were stamped on arrival.

There are five places around the island where boats can dock – one of them is the place where whalers used to come ashore. Now the people who work here are scientific researchers. We saw the world’s most populous penguin colony – 140,000 birds!

Eight of the sixteen days of our tour were spent entirely on the ship, and this affected many travelers. Some had terrible seasickness, but more generally, most of us couldn’t concentrate on anything for more than an hour. I tried to keep a diary, but I didn’t have the patience. Fortunately the crew made a big effort to keep us all occupied – there were all kinds of popular science lectures, and even Scottish dancing lessons and Chinese karaoke. Sometimes they even organize activities were people can jump into the water, but the wind in these parts has a habit of interfering with that sort of thing.

From the ninth or tenth day I started to get my sea legs, and to enjoy the ocean travel. They gave us pills for the seasickness, and we slept really well.

This was the most memorable travel experience of my life, and really changed the way I look at and think about the world.” (Sergei, 2019)

Many travelers want a very tight schedule, spending as little time as possible on Antarctica and merely ticking off this unique destination. If this is your goal, the best way is to start from the Chilean city of Punta Arenas. Most people book a tour online with a local tour operator, paying in advance, or at least making a significant down-payment. This does not mean that we will know in advance the exact date of our tour’s departure. The company can only supply a timeframe, because departure depends on favorable weather conditions, and forecasts. On the day of our departure we depart from Punta Arenas, and within a few hours we’ve touched down on a peninsula known as Upper Path. For those who want to reach the South Pole itself, the program is different.

You can pay for a flight which will take you over Antarctica from above, and let you see it without actually setting foot on it. It seems that this option isn’t particularly popular.

Some important things to consider:

1. If you’re taking a cruise, how many stops does it make?

2. Is it important to set foot on the continent of Antarctica?

3. How many other travelers are on the ship? If it’s more than 100, they divide you into two groups every time you dock (this is mandated by international seafaring rules)

4. It’s worth asking for quote from various tour operators, because you could save as much as $1000 per person

5. If you’re not dead set on reaching the South Pole, you don’t need any special preparation.

It’s possible to travel to Antarctica from Australia or New Zealand, but this takes longer and is more expensive. The journey by boat takes at least a month (!) and there’s no option that costs less than $15,000. On the plus side, this longer journey includes stops at various islands, and you can see a lot of wildlife. The disadvantage is that the eastern side of Antarctica is colder than the side closest to South America.

It’s both cheaper and easier to depart from the Argentinian port of Ushuaia. For tours departing from Ushuaia you can sometimes get tickets for as little as $3,000. This is a sea voyage, and the price largely depends on the category of cabin you choose, as well as the route and the number of travelers.

During the high season between December and February, tourist boats depart every 2-3 days.

1. The classic, 11 days: Sail through the Drake Passage, with around five stops around Antarctica and on the continent itself

2. Crossing the Circle: Southern Expedition: Crossing the Antarctic Circle – more wildlife can be seen on this trip, more events, more days, and with a higher experience value

3. Trips including South Georgia or the Falkland Islands. South Georgia is everyone’s favorite destination – even among scientists

4. There are also some tours where travelers spend a night at a campsite or in a permanent building on the sixth continent.

It’s important to be aware all landings can be reached only in good weather. 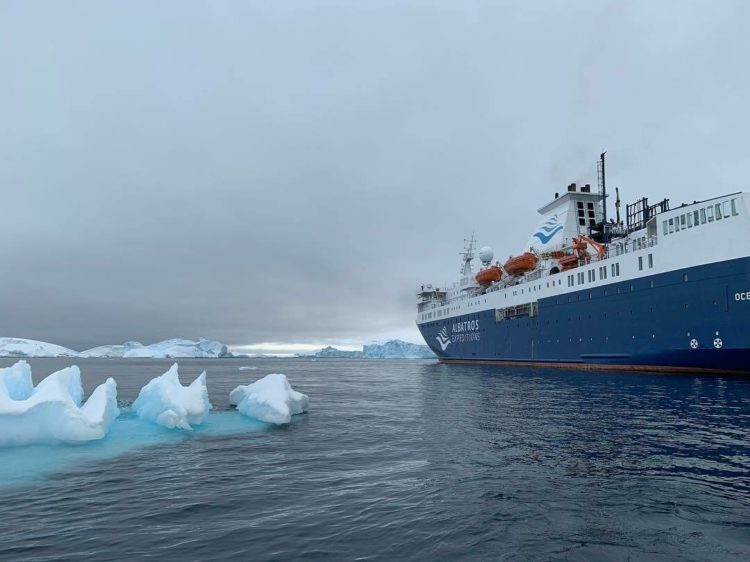 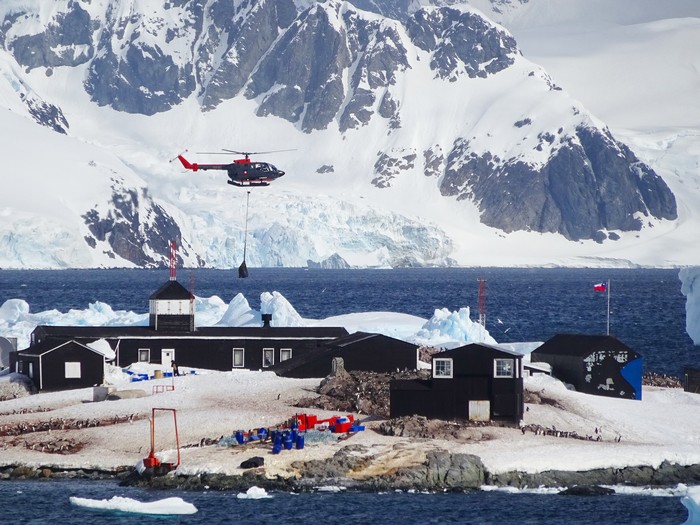 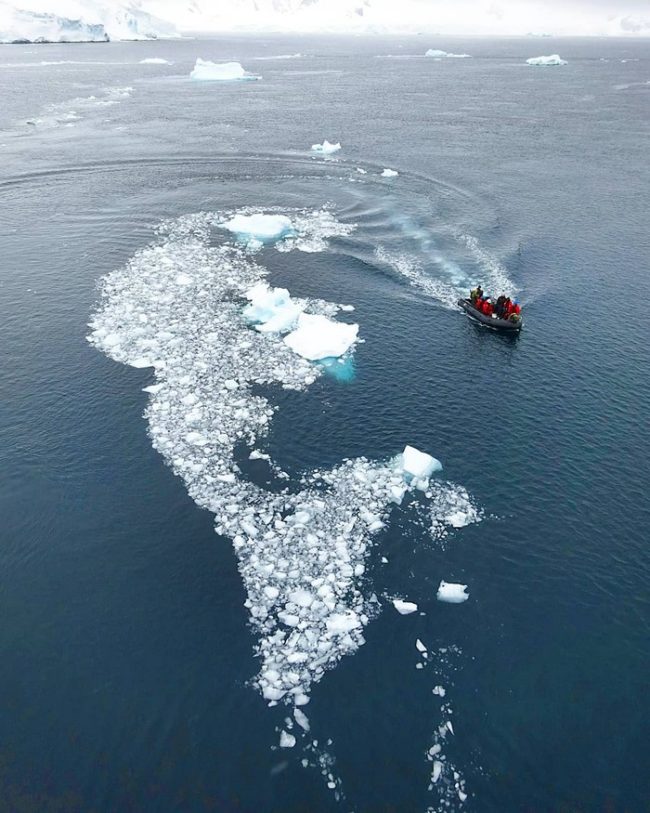 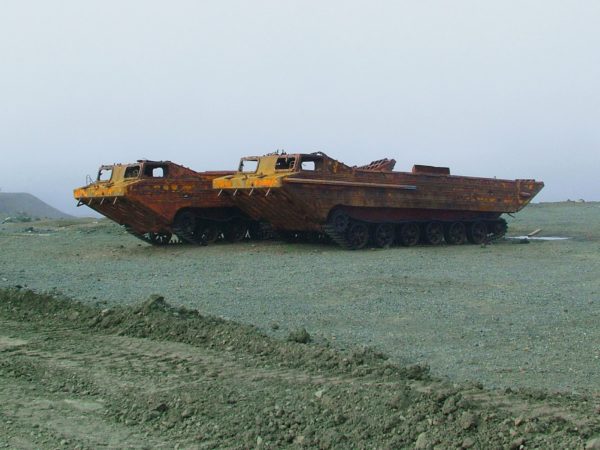 Antarctica - curious seal - who are you? - Sergei's photo

Antarctica - uninvited guests of the research base - Elter 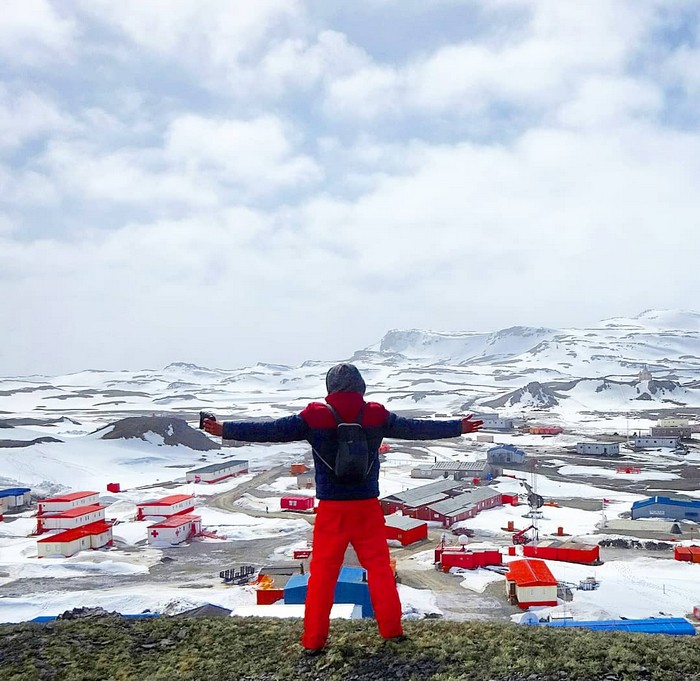 Antarctica - naval base of the Chilean army - Javi's photo (miaventuraviajando.com)

This seemed like a serious matter, but it was simplified when we learned from the company brochure that passengers would be given a waterproof jacket, warm pants, a cap and even gloves. You can also rent special boots.

1. You need comfortable shoes that are easy to take on and off, thermal leggings and at least two pairs of wool socks

3. Comfortable clothes that are easy to wash and dry (there’s a laundry service on the boat, but it’s quite expensive)

5. Anything that will pass the long, empty hours of travel on the boat (video games, good books)

6. Your favorite instant coffee or tea, because the stuff you get on the boat isn’t good

7. It’s worth buying snacks before boarding (though the food they provide on board isn’t bad)

8. A laptop, though most people have the experience that their mood (and potentially also seasickness) often affects their ability to concentrate

9. Seasickness tablets (though you can get these on board too) and possibly also some aspirin and anti-inflammatories

10. A camera tripod or stand

1. Before taking out travel insurance, it’s important to check carefully whether it even covers trips to Antarctica. Most insurance is simply not valid on the sixth continent. You’ll need a policy with an upper limit of at least $100,000.

2. Three meals are served on board every day (they’re included in the price). You can buy cocktails at the bar, but you’ll have to pay extra.

3. You can buy satellite internet on the boat. Half an hour costs $20, for instance, and it’s $600 for a whole week. It’s not a particularly fast or smooth service, and your connection to the outside world can be interrupted for as much as a whole day at a time. 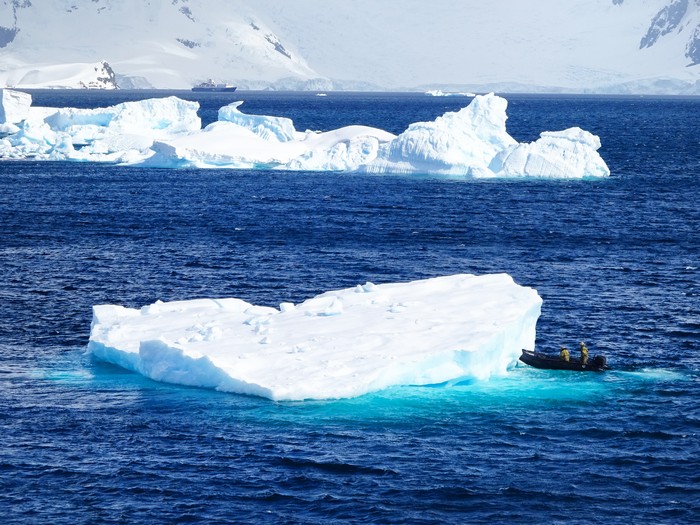 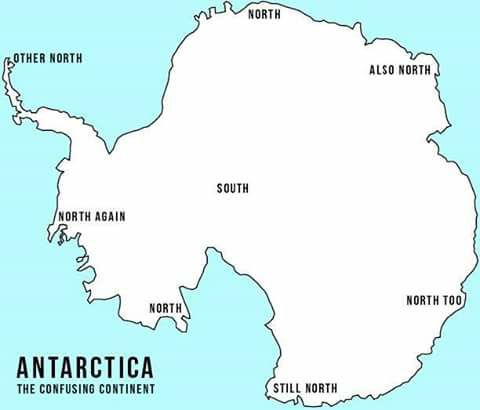 “Antarctica – the sixth continent. In fact, it’s worth knowing that there are two possible understandings of the term. The first is the whole region, including the surrounding ocean and nearby islands, and the second is the Antarctic landmass itself.

The ideal time to visit Antarctica is between November and March, during the summer, when there is more sunshine and occasionally even a little heat.

Population (in 2020):  The continent has no native inhabitants, only permanent and summer-only staff at the research stations. 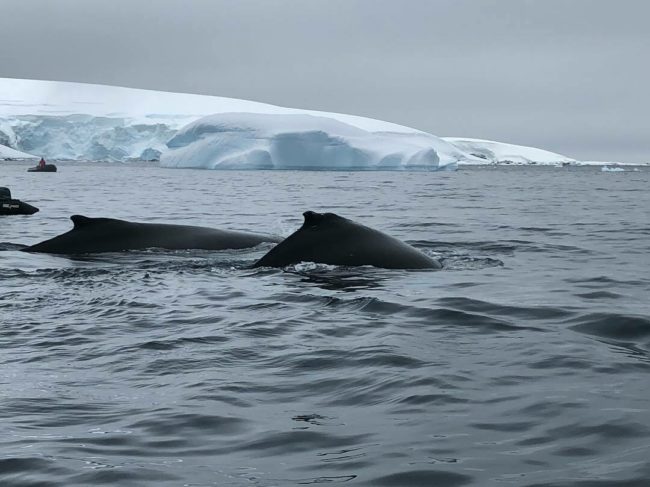 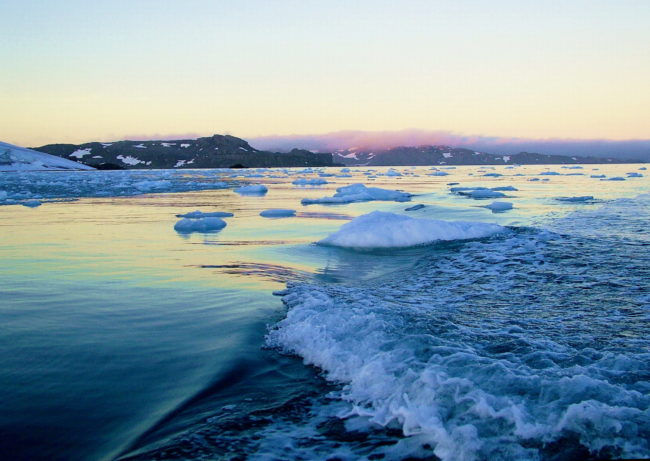 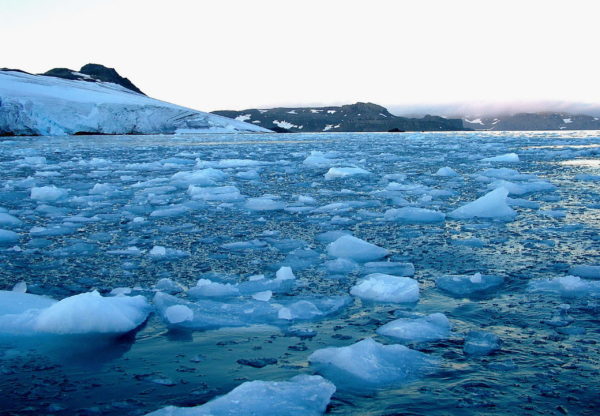 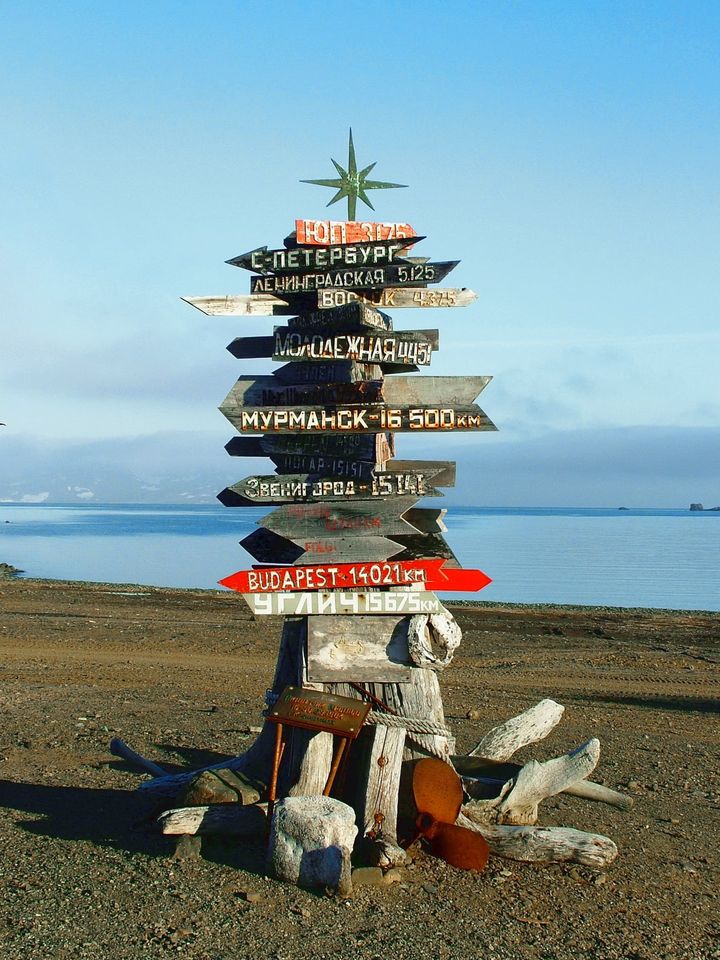 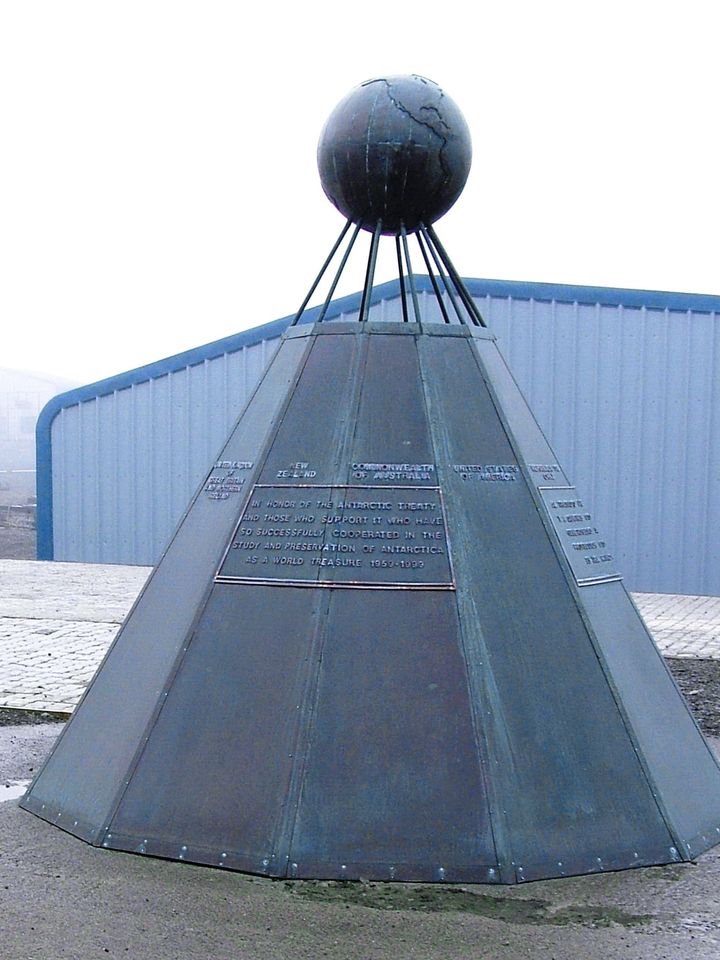 Antarctica - Monument to the Antarctic Treaty - this treaty was signed in 1959, and provided the legal framework for the region beyond 60º South latitude - the treaty prohibits military activity - Elter photo 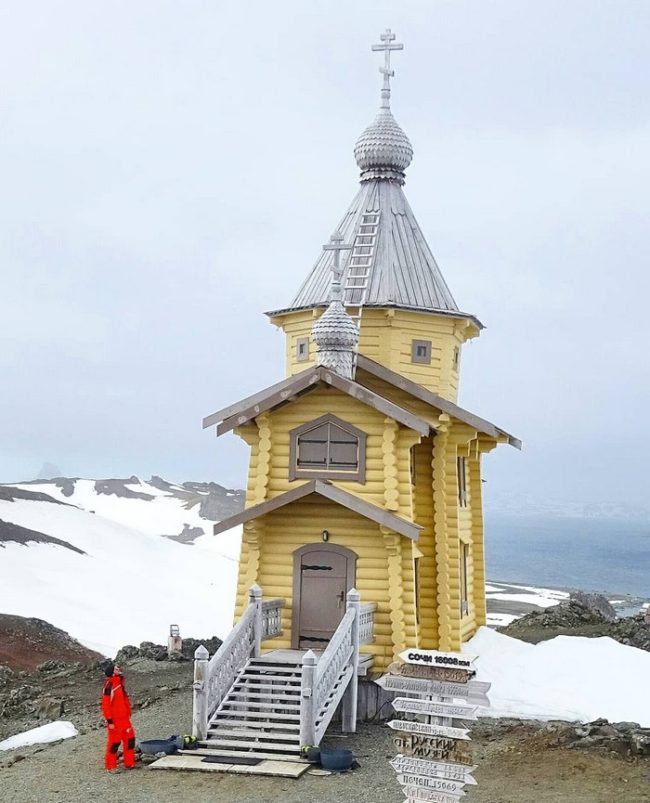 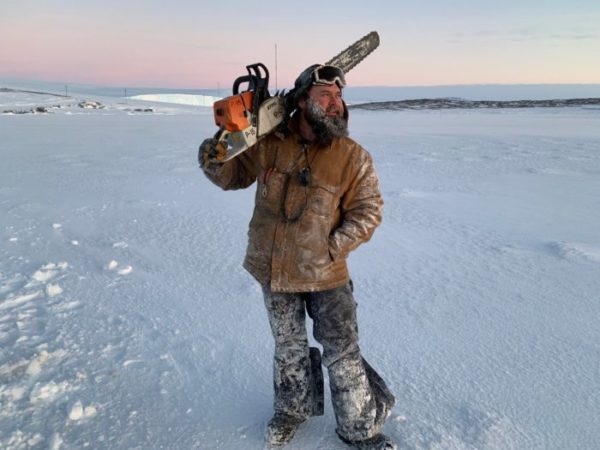 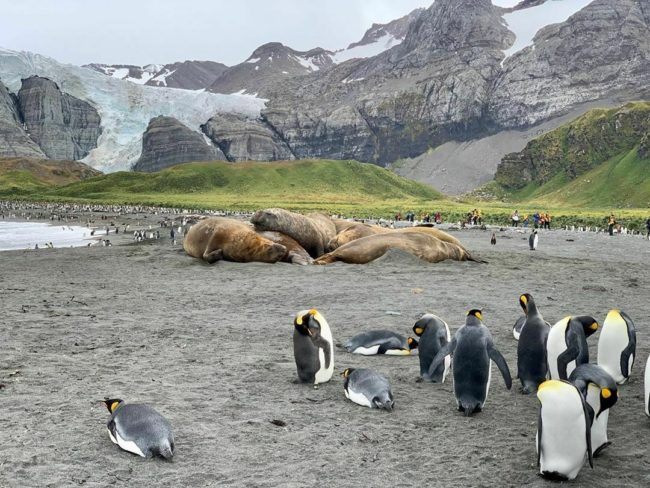 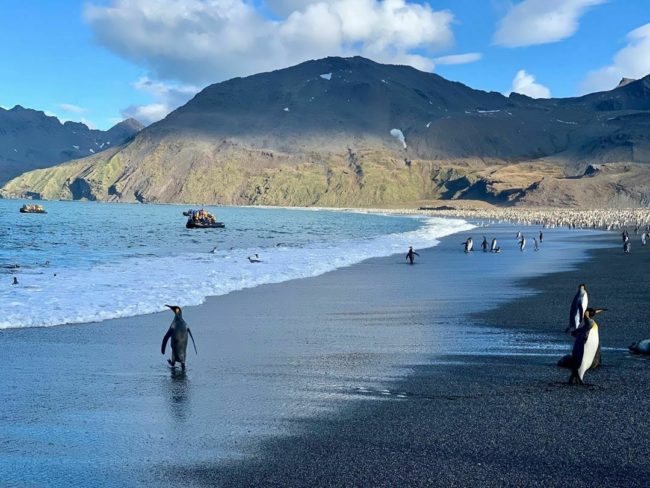 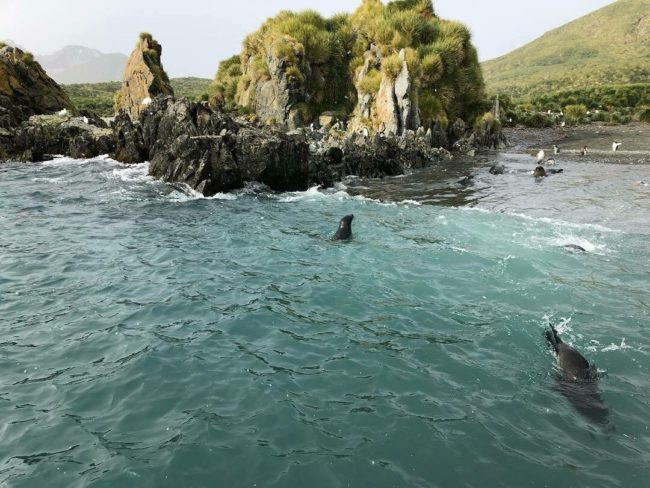