2. The peacefulness of Isla de Ometepe with its intensive green colors, situated on the vast Lago de Nicaragua

3. In some areas the villages are picturesque, egzotic

4. Maybe the only attractive character of Managua is that the capital city is full of likable university students and they nicely fill the streets, cafes (27 universities operate in Managua!)

5. Foreign tourists are seldom victims of rip-offs; most of the Nicaraguans seem to be honest (not our waiter in Granada...)

6. Taxi is cheap in Managua, taxi drivers are correct

7. Feasting of a garlic-flavored lobster on Corn island

8. Visit the ruins of the oldest Central American town and one of the oldest Spanish colonial settlements in the Americas: Léon Viejo

9. Look round from the top of León's Cathedral

1. Managua is mostly somehow spiritless, probably this a  longstanding aftermath of the 1972 earthquake which effectively destroyed the entire city

2. Nicaraguans are littering with full negligence.

4. In many smaller settlements, there are still visible signs of the destruction caused by the civil war of 1962–1990

6. Many freeloading, do-nothing teenagers are hanging around in the central park of Grenada.

7. At Masaya volcano the smell of escaping gas irritated my breath

8. mosquitos, bedbugs, spiders and some moronic creatures (in the shape of trekking companions)

“I feel sorry for Nicaragua, because this is a country and a people that deserve much better. The country has been hit by more than its fair share of natural disasters, and its history is a catalogue of misfortunes. For too long they strove to implement socio-political ideas that were based on noble sentiments, but which from an economic and welfare perspective did not lead to successful outcomes. Of all the Central American countries I visited, Nicaragua had the least of interest. I don’t regret going, but it didn’t leave a very distinct impression.

Environmental awareness is low in Nicaragua. Most people throw trash wherever they are and do not care about it. Sad to say, but many Nicaraguans do not even care about their hygiene, cleanness.

The main roads and trans-American roads are of good quality and easy to drive on them. On side roads, especially in rainy periods, the use of 4-wheel-drive cars is recommended.

In the event of an accident, it is advisable not to move the car off the scene. Call a police officer who will issue a report and establish liability.

"Don't look for road signs, because there aren’t any. Why not? At least it means they can give directions confidently, and you can get completely lost again after turning two corners. If someone stops in the middle of the intersection, don't be surprised - he's probably just as lost as you. No one-way streets are signposted – why not? Well, when a truck comes down the street the other way, you’ll quickly realize for yourself that he has priority. The quality of the roads is at least much better now, and there are no tolls anywhere, which is definitely a positive. Just watch out for speed bumps, which appear out of nowhere in the most unexpected places.

Garbage is burned on the street! You can imagine how bad it smells! Apart from that, though, pretty much all of Nicaragua is clean!!! This came as a surprise to us!” (2017) 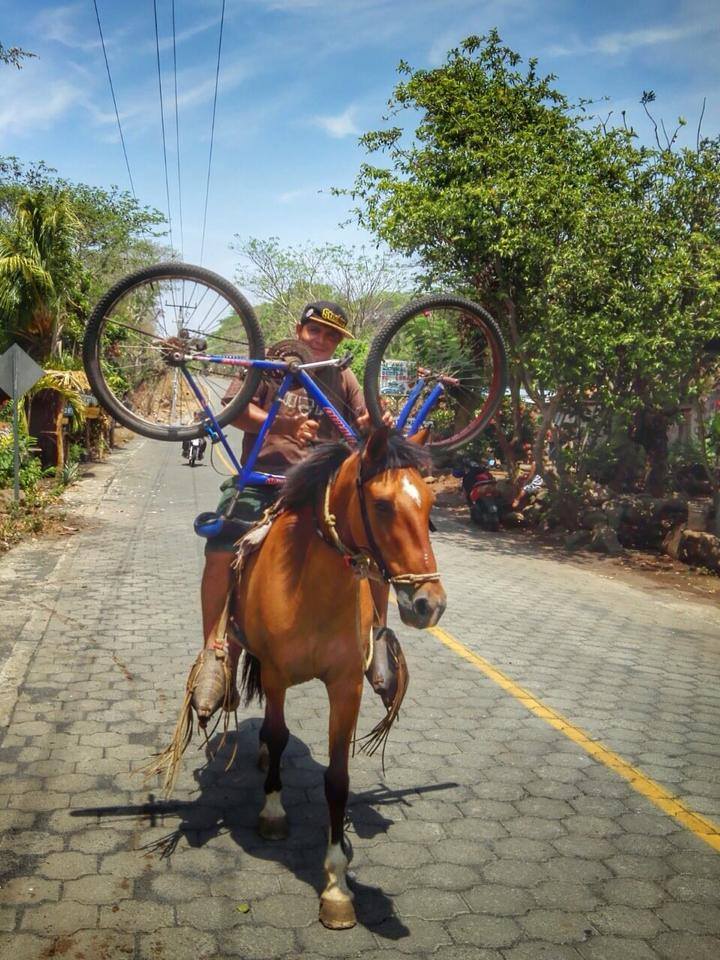 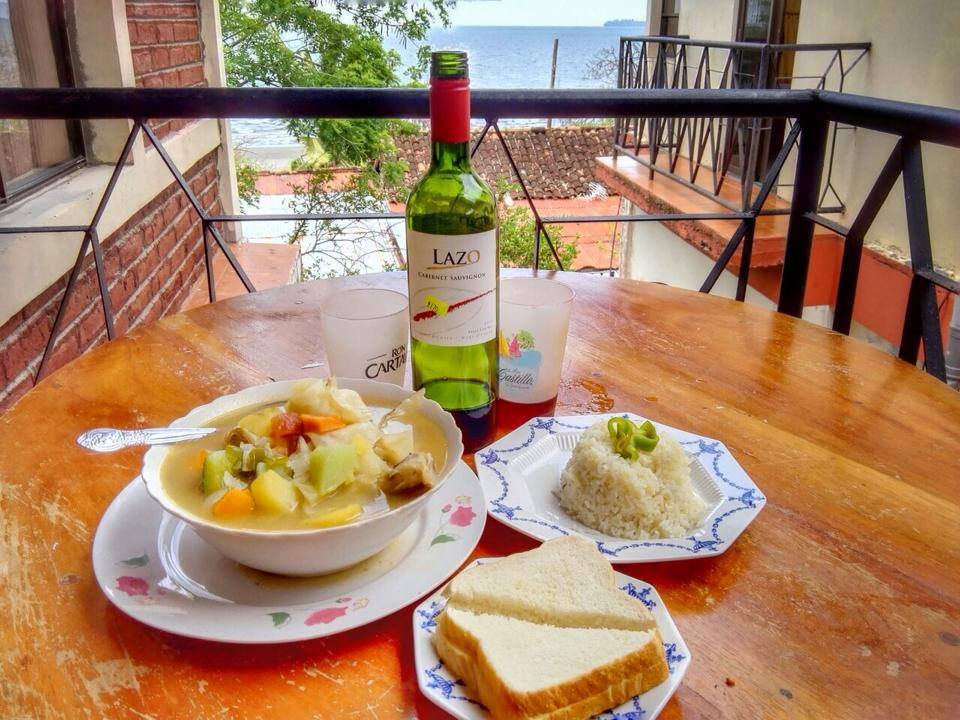 Tourists tend to use US dollar currency, and the prices are often displayed in USD, but it is more beneficial for you to ask for the fare in Cordobas and pay that way.

León - A jewelry shop with Mona Lisa having an extra earring, a necklace and rings 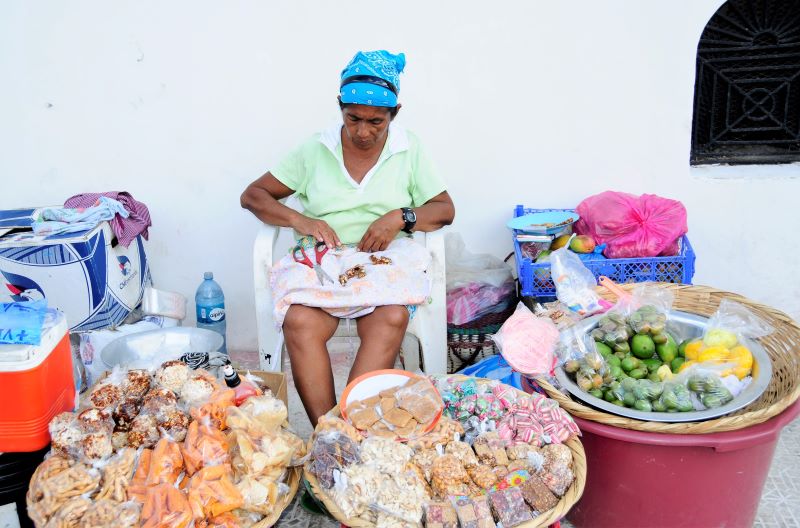 1. Sometimes tourists are approached in the street and offered to use a shared taxi or car, promising cost savings. Avoid a potential robbery and better reject any offer made by such a stranger. Also, don't let your taxi driver pick up an additional passenger on the way.

2. Due to frequent thefts on the beach and in hotels on the Corn Island and Caribbean coast (Bluefields, Puerto Cabezas), be extremely careful and in Managua avoid walks in the "San Judas" or "Memorial Sandino" districts after dark at night.

3. Please avoid using any means of transport at night, don't walk in deserted neighborhoods or beaches, don't wear valuables, and do not leave your drinks unattended in nightclubs. 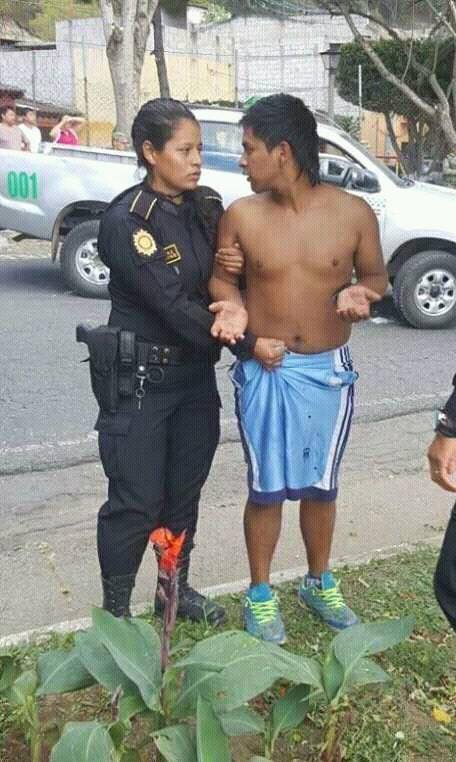 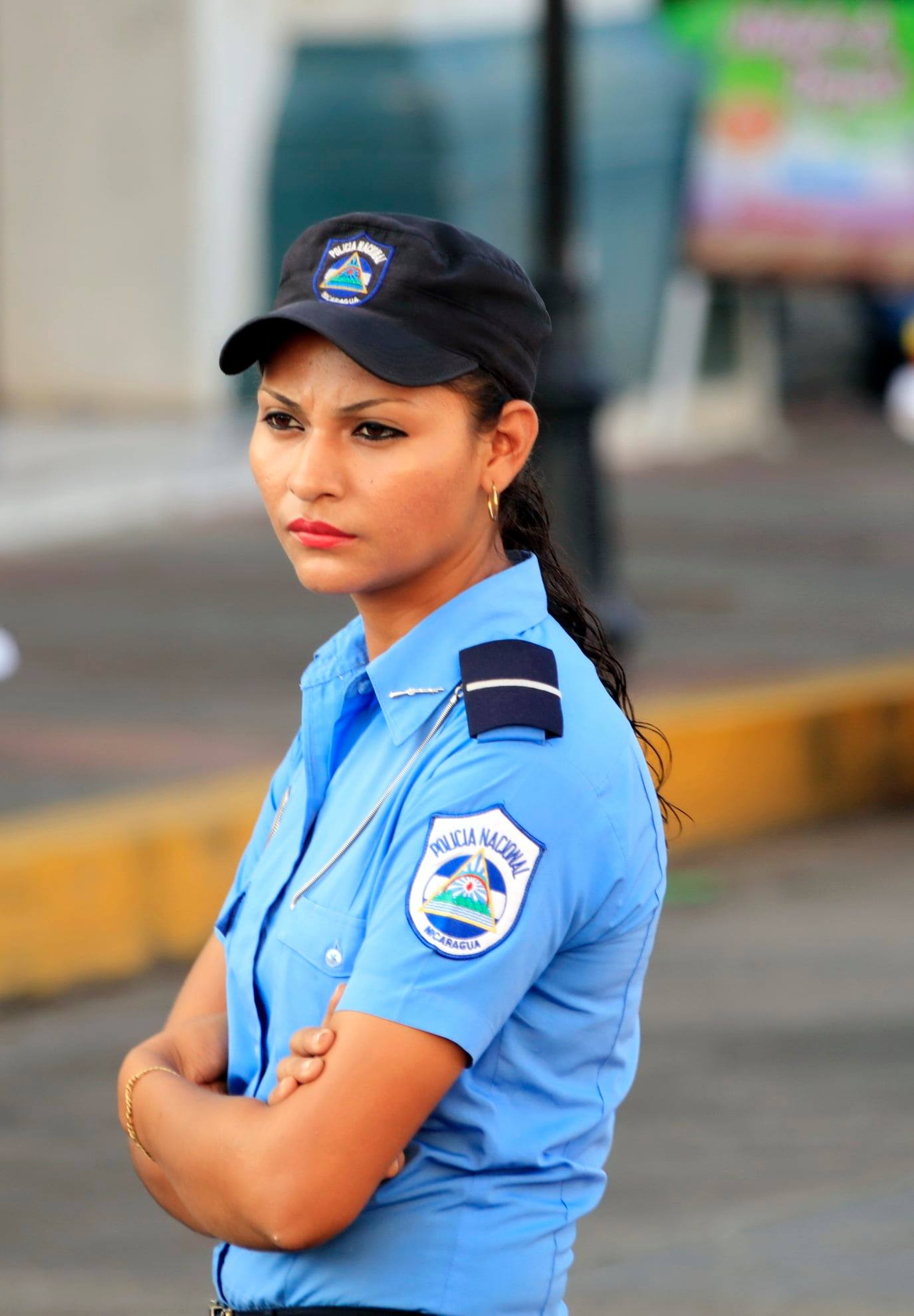 During the rainy season, many diseases spread by mosquitoes occur, dengue fever included. You can prevent tropical infections by due care, medication, or vaccination. We advise the intensive use of preventive and protective mosquito repellents, creams, or other similar preparations, especially if you spend time along the coasts.

In Nicaragua, there is some risk of Zika Virus infection as detected cases are on the rise.

Don't drink tap water. Almost all hotels and many hostels and guesthouses provide filtered water for free or for little money.

1. Tipping is expected for tour guides and drivers, like everywhere else, and restaurant staff expects a 10% tip.  Service fees may be included, so, in this regard, read the menu carefully before settling the bill.

2. "Watch out for begging kids, because at least 5-6 will soon surround you. They'll do everything for money. One of them liked me so much that he didn't mind me not giving him money, but openly admitted he would accept me as his girlfriend instead!" 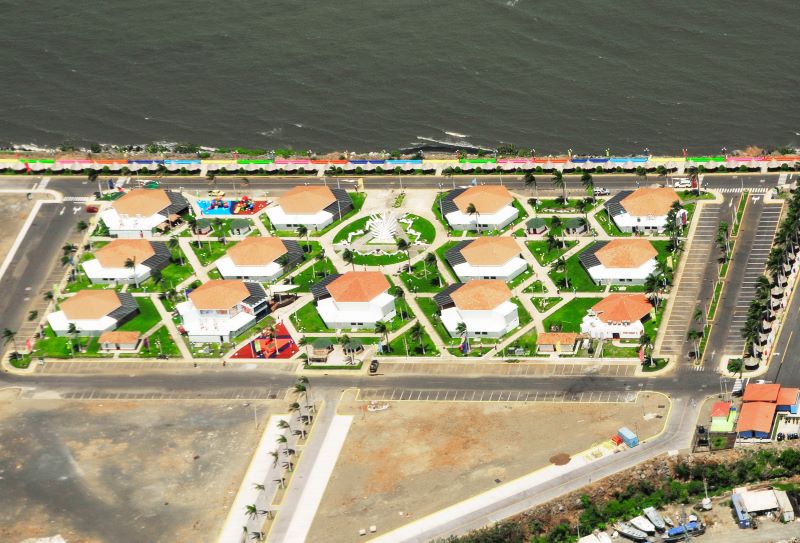 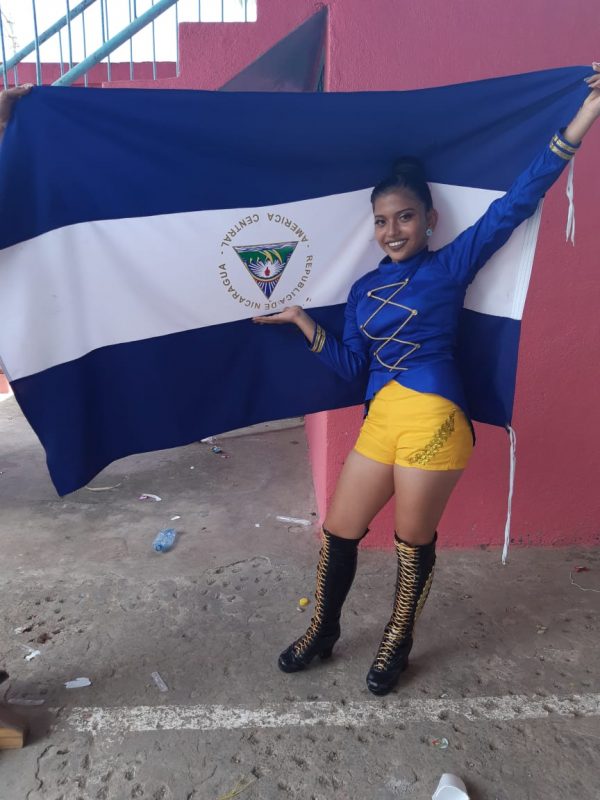 Nicaragua is a Central American country. Many locals call it Nica.
Neighbors: Honduras (north), Costa Rica (south), coasts on both the Pacific Ocean and the Caribbean Sea.

Size: 129,999 km² (50,193 mi²) – Nicaragua is the largest Central American country (Mexico is geographically North American). Known as the "land of lakes and volcanoes," Nicaragua is also home to the second-largest rainforest of the Americas.

Nicaragua is the poorest, most underdeveloped country in Central America. Tourists can easily witness the traditional, non-westernized way of life of the locals.

Public safety: It is not at all likely that a tourist will fall victim to any type of violent crime. In this respect, Nicaragua is safer than Honduras, El Salvador, or Guatemala. There are no drug trafficking gangs at all. The shaky, tense domestic political situation and conflicts between the forces of the authoritarian government and opposition groups are much more problematic safety-wise. It is important to get detailed and up-to-date information about the security situation before visiting Nicaragua.

Best time for a tourist visit: December and January are dry months, ideal for visiting the Pacific coast and the inland. The climate is pleasant from mid- April to mid-May. July to October is hurricane season, and September-October is rather rainy.

Most famous tourist attractions: The Old Town of Léon, Granada (popular among backpackers, the oldest city of continental Latin America), Lago de Nicaragua, Masaya Volcano National Park, Apoyo Lagoon
Not too many tourists visit Nicaragua, which is both an advantage and a disadvantage. The tourist infrastructure is still underdeveloped and there are no sensational, or, to put it more accurately, well-promoted tourist attractions. With its splendid tropical landscapes, the country has great tourism potential, especially for ecotourism. Backpackers enjoy Nicaragua as an off the beaten track destination. On a single day, you can swim in the Atlantic Ocean in the morning and in the Pacific just before the sun sets. Nicaragua has excellent surfing spots on its Pacific coast. Managua is not really exciting, but at least the locals are welcoming and friendly.

In Nicaragua, it is almost always hot. During the European winter, the temperature varies from 20 to 30 degrees Celsius with a little rain, and from May to October / November, it runs between 22 and 26 degrees. Periods of heavy rain are more frequent. There is almost constant humidity of 90%. The high season is from December to April.

During cyclones, pls inform about the warnings of the National Hurricane Center and local weather forecasts. During the rainy period from May to November, floods, and landslides often occur.

About 80% of the population is brownish (Morena). There is still a lot of discrimination/favoritism based on skin color. Whites are strongly privileged. 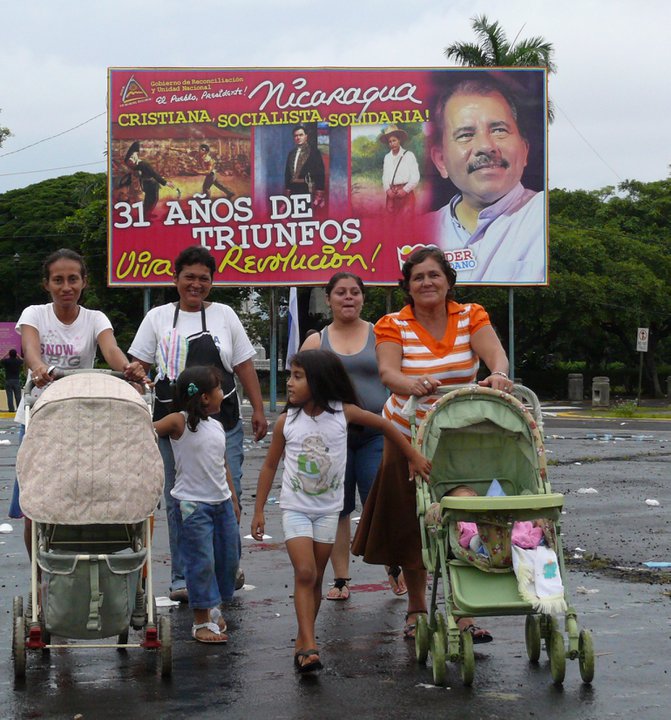 ,, Environmental awareness is low in Nicaragua. Most people throw trash wherever they are and do not care about it. Sad to say, but many Nicaraguans do not even care about their hygiene, cleanness."

Nicaragua - Granada - a mother with her child - Elter photo 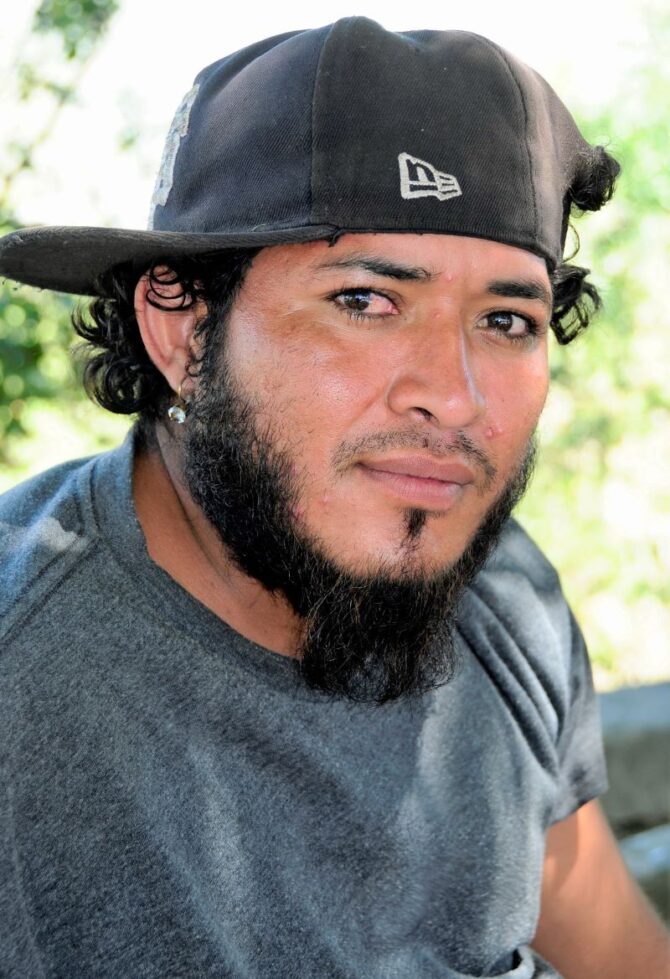 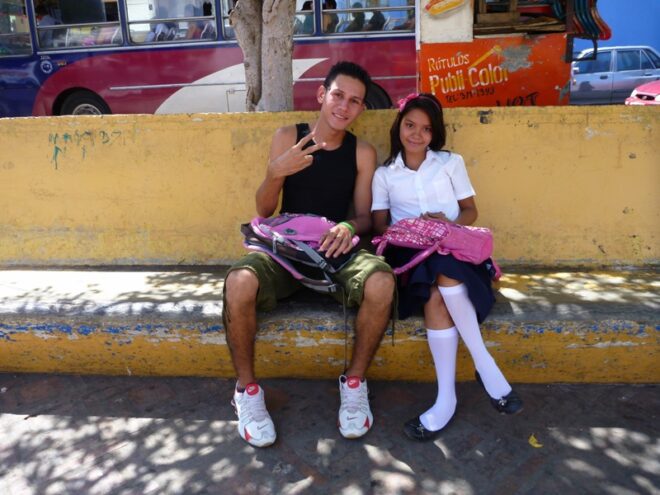 1. If as a driver you are stopped by the police, you can joke, argue, cajole, even ask about families. It helps to pass a couple of bucks to the officer for a soft drink.

2. When shopping in the markets, you can bargain a bit on the price, but don’t overdo it because (unlike some other countries in the world) it can be offensive.

3. Don’t walk around city streets in swimsuits or too casually. 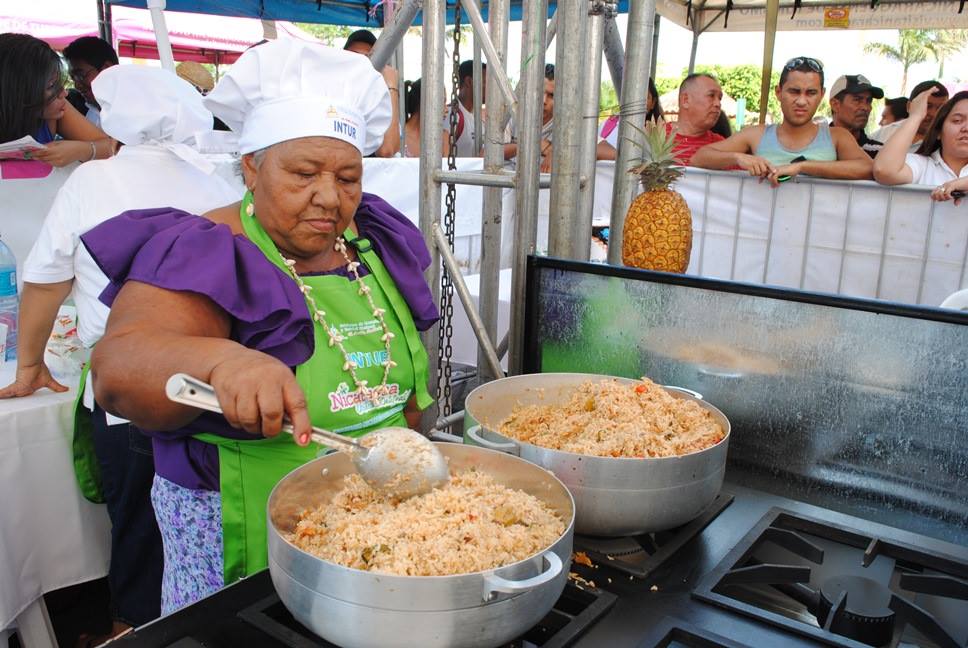 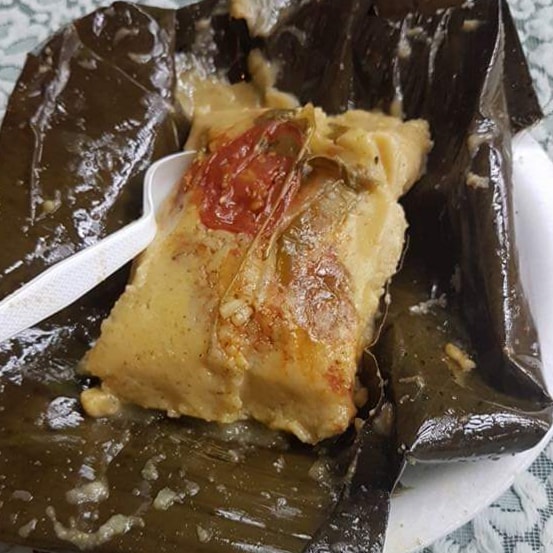 Nicaragua - nacamales, like the tamal in Mexico - u.m. photo 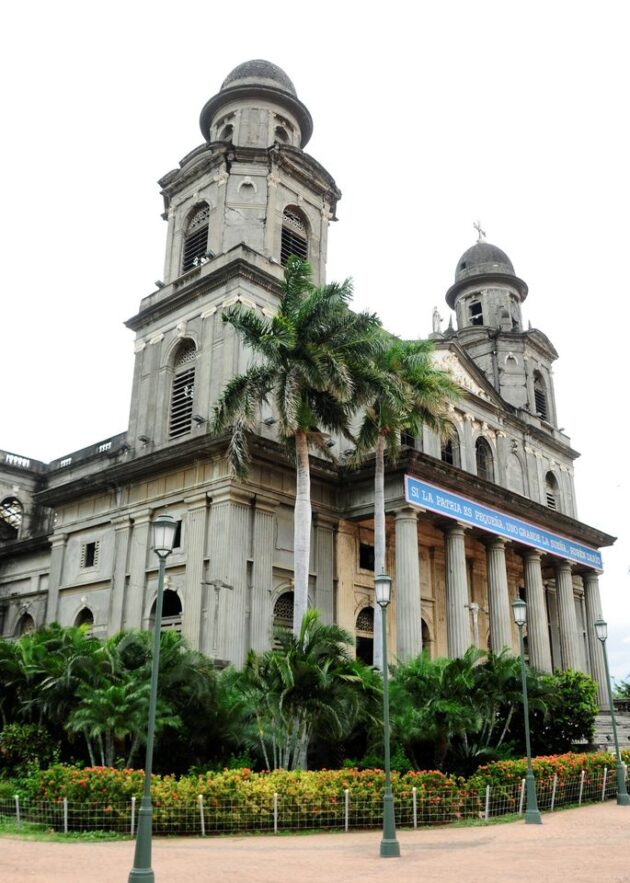 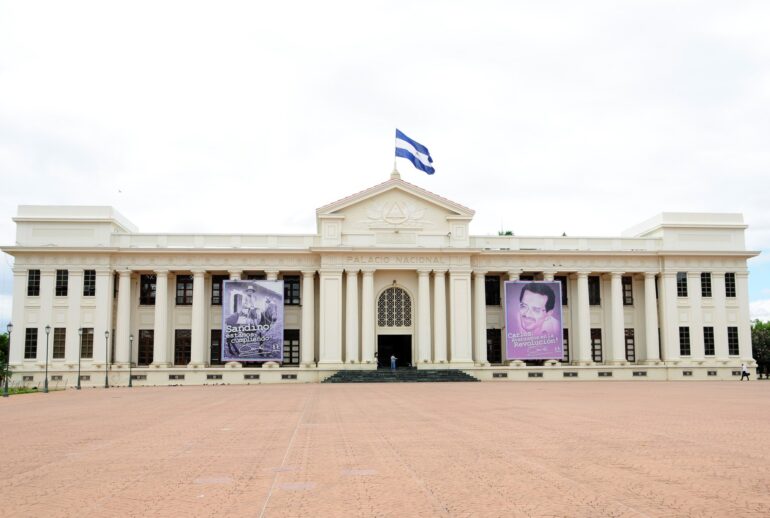 Just under an hour from Managua airport, it is more attractive than the capital and is, therefore, more often visited as the first stop on a Nicaragua's trip.

In our opinion, with an afternoon excursion in a surrounding area and half a day in the islets, you have to calculate to stay at least three days in Granada. 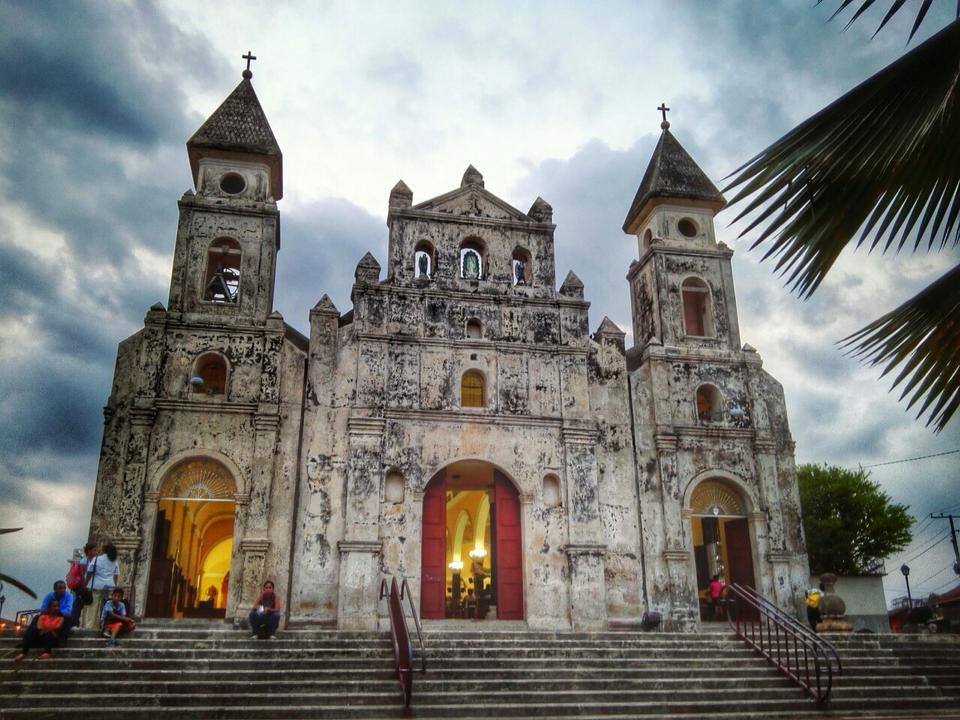 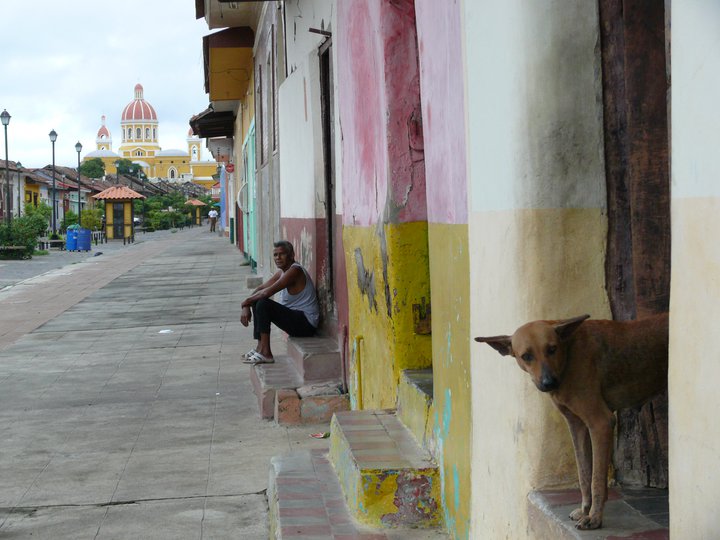 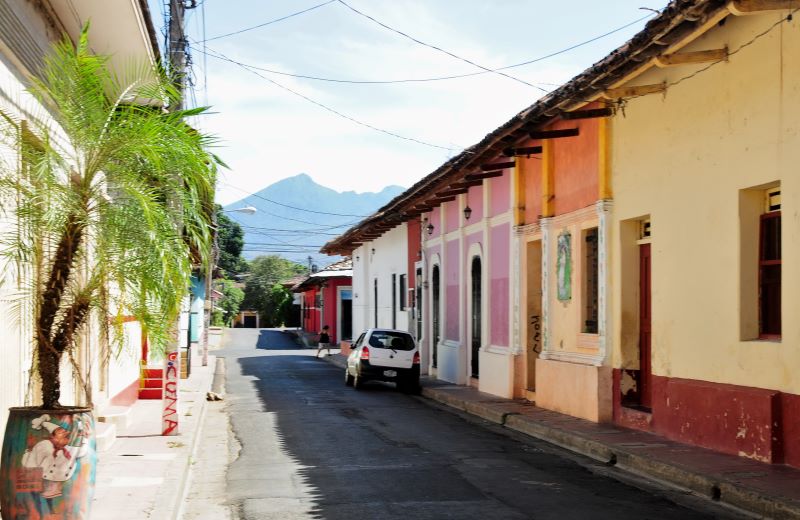 You can get to Big Corn Island by plane from Managua (La Costeña in 1.5 hours) for around 170 USD round trip. It is also possible to get by land to Bluefield, on the coast, and then to Big Corn by ferry. That is, of course, cheaper but takes much longer. We recommend the plane but beware of the baggage restrictions, as they are quite strict.

Evidently, Big Corn is the larger of the two islands. A panga (local boat) transports visitors to Little Corn Island a few times a day for less than 10 USD. Be prepared for drizzle and sometimes even breaking waves!

The smaller of the two islands is magical: no car, no stress, only endless turquoise water, and a little hippie atmosphere. 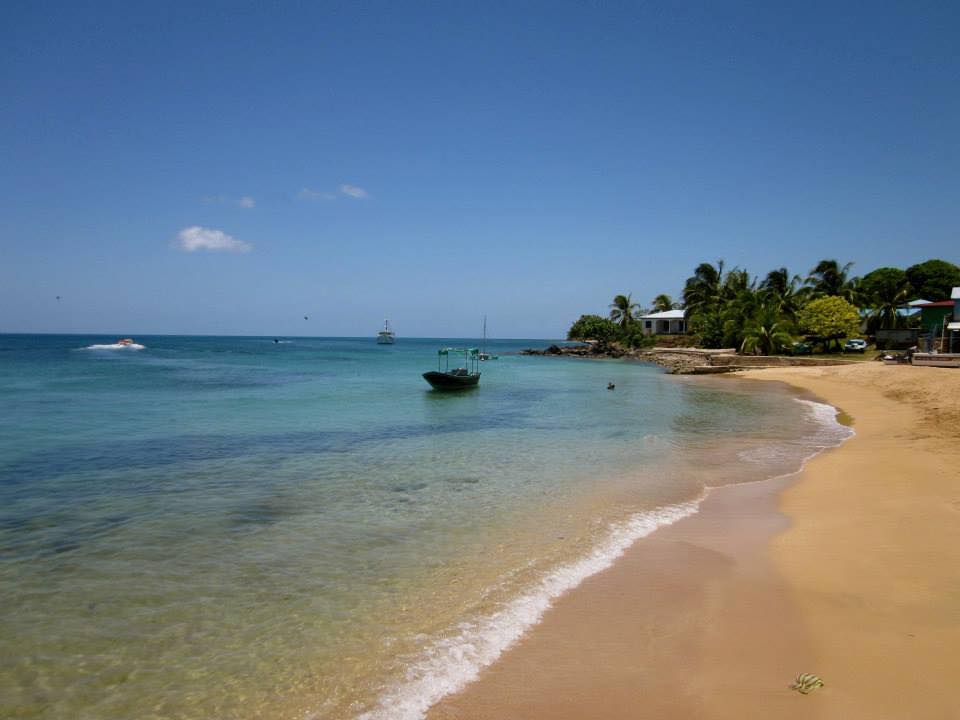 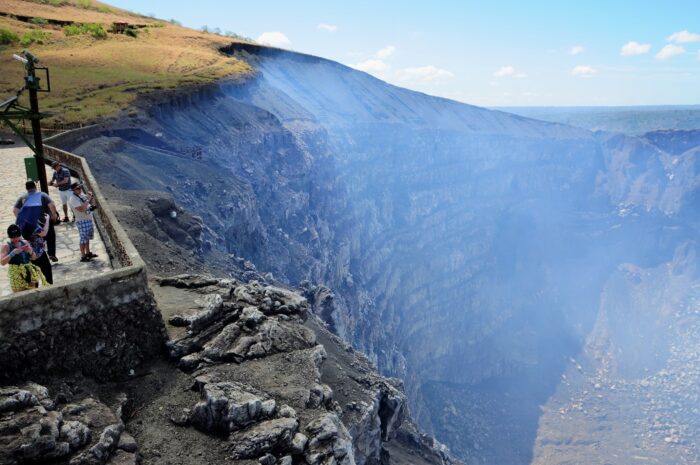 “"For four hours we clambered up between rocks, giant trees, and dripping ferns. A few times, however, the tour guide consented to stop and let us gasp for air - especially if some animal had appeared in the treetops. The forests of Ometepe are home to a large number of howlers, a species of monkey so-called because they make a sound like an orc being slowly stabbed to death. Listening to that unarticulated roar in the misty forest is quite disturbing, so our tour guide, as soon as he saw a howler in the tree, immediately showed us. The howler is about the size of a cat and not aggressive at all, only its howl sounds as though it wants to tear the world to shreds.

In the fog and mud, amid the roar of howlers, we finally made it to the top of the volcano. A tiny, crystal-clear lagoon lay hidden in the crater, and the grass around it was as green as a golf course. Unfortunately, there was no view, the volcano was shrouded in clouds when we climbed, so we couldn’t see more than twenty or thirty meters in any direction. But if the weather had been clear, we would have been able to see Lake Nicaragua all around, and maybe even the Pacific beyond it. Instead, however, we just lay on the grass for half an hour, then picked ourselves up and descended back to the finca over the course of another four hours.” (2016)